History and Information on Park Street at Digbeth and Duddeston in Birmingham in the County of Warwickshire.

Some history of Park Street 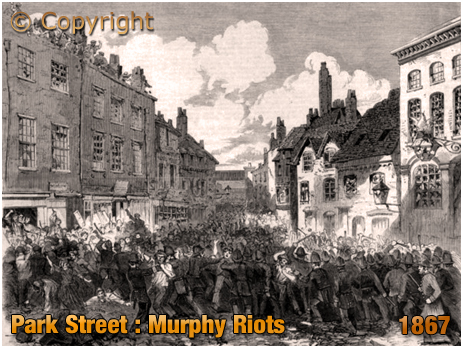 If you have a genealogy story or query regarding Park Street you can contact me and I will post it here in addition to including your message within the website pages for Birmingham Genealogy.

If you would like to share any further information on Park Street - perhaps you drank in one of the pubs in the past? Or maybe knew a previous publican running one of the boozers? Whatever the reason it would be great to hear of your stories or gossip. Simply send a message and I will post it here.

"Yesterday, at the Public Office, other of the prisoners in custody on the charge of being concerned in the riot of Monday night, Park Street, were brought before the Magistrates. A. Walter prosecuted; and Mr. Yeatman [instructed Mr. Maher] defended some of the prisoners. The first case taken was that of those prisoners apprehended during the disturbance between seven and eight o'clock at night. Their names were Thomas M'Cale, Michael Coffee, Patrick Callagan, Thomas Throne, Bernard M'Dermott, Robert Lewis, John Hastings, Michael Leonard, and David M'Cale. Mr. Yeatman appeared for all but Hastings, Lewis and Throne. Mr. Walter said he did not think necessary to go into details. He would simply observe that the whole of the prisoners were acting in concert in the riot between seven and eight o'clock on the Monday night. He then called the following evidence :

Police Sergeant [29] Burton : "On Monday night, about seven o'clock, I was sent to Park Street, with a detachment of forty-five police. When we got there from Freeman Street, we found a large crowd, numbering some hundreds, at the end the street. They were throwing atones, and had sticks, iron bars, and weapons of different kinds, in their hands. Part of the churchyard wall and the rails were pulled down, and used as weapons. I produce part of the iron rail. The people began to stone the police when we turned the corner of the street, and to throw pieces of iron and other things at us. The bar of iron produced [about 2 feet long and almost an inch thick] was thrown at me; I evaded it, and it fell on the ground at my feet. The whole of the people were assailing us. We charged the mob, and they scattered in different directions. The police divided - part went down Park Street, and the remainder went through Bordesley Street and Allison Street into Park Street. I arrested Coffee. The mob ran, but turned and pelted us as we pursued. When we got into Park Street we found the mob still throwing from the entries and windows of the houses, and on the waste grounds. This continued for three-quarters of an hour, when we returned to the police office with the prisoners. Coffee threw stones at me. None of our men were hurt on this occasion."

By Mr. Yeatman : "There were other people in the entry throwing stones at us. I never saw Coffee before us." By Mr. Kynnersley : "There were some windows broken, and we were obliged to break open the doors when we were assailed from the windows." By Mr. Hebbert [Magistrates' Clerk] : "I had been down Park Street about four o'clock, and there was stone throwing then. There was a large collection of people, who kept a running fight at one another, and at the police."

Police Constable [62] Hardy was with Burton, and gave corroborative evidence. He saw Coffee throw a bar of iron at Burton as he was going up an entry, and Coffee also dropped a brick-end out of his hand. Police Constable [298] Henry Withey : "I was with Burton on Monday, in Park Street. I saw McDermott and Thomas there. M'Cale had a stone is his hand, but he was too close to throw, and he dragged me after him into his house. The stone was the size a coconut. I saw both M'Dermott and M'Cale throw at the police." Police Constable [291] Smith was also with the police, and saw Patrick Callagan throw two or three times at the police. Police Constable [178] Day took Throne into custody. He saw him throw stones at one of the Hussars. Witness saw the military come up Park Street, headed by the Mayor, who halted and read the Riot Act. This was after the stone was thrown."

William Hall was in Park Street on Monday evening. The cavalry were coming down Park Street into the Bull Ring. He saw Throne with some stones in his hand, and apprehended him. The police had just passed, and the mob threw at the police and at the Hussars. Joseph Showell saw Throne throw a stone at the officer in command of the Hussars. The stone struck the officer's horse on the hind-quarter. Police Constable [171] B. Hawkes saw Lewis throw several stones at the police from the window of his house. He went in and apprehended him. Police Constable Haycock saw Hastings in an entry, throwing stones at the police as they passed. Witness followed him into his own house, and apprehended him.

Police Constable [304] Bishton saw Michael Leonard standing at the bottom entry, in the street, throwing stones at the police. He saw him throw several times. He then ran up the entry, and witness followed him, prisoner throwing back all the time. The officer apprehended him at his own door. Police Constable [260] Keight said David M'Cale threw a brick at him as he went up an entry. Witness apprehended him. Several persons who had been throwing stones at the police ran up the same entry.

Police Superintendent Sheppard : "In consequence of the disturbances Park Street, I went out with a detachment of police shortly after seven o'clock on Monday night. Burton was with me. The riot continued till about a quarter to eight. I was struck by a atone thrown by one of two men standing in an entry. Both men were apprehended, but I cannot swear to them. M'Dermott and M'Call look like the men. The riot was very furious at the time. The Hussars went down the street shortly afterwards." Police Constable [10] Prosser apprehended M'Dermott. He saw him throw at the police.

The prisoners all pleaded not guilty, and Mr. Yeatman submitted that there was no evidence of David M'Call being personally concerned in the riot. Mr. Kynnersley said it was a question whether he was not one of those taking part in it. They must all be committed to the Sessions. He was sorry for it, because he saw that all the prisoners were there for the first time, and they had good characters from their employers as decent, hard-working men. The Recorder, no doubt, would make every allowance for their good characters, and the provocation they had received. A great many of their employers had written to him giving them good characters. It would be necessary for those masters to attend the Sessions. Bail was accepted - one surety £5.

The next case was that of the prisoners captured by the police, during the disturbance in Park Street, between half-past eight and half-past nine o'clock. Their names were John Robins, Owen Graham, John Heraghty, John Smith, Martin Mally, William Melville, William Lee, Patrick Kilroy, and David Allcock. Mr. Yeatman appeared for Kilroy, Malley, and Heraghty. The following evidence was given :

Police Superintendent Sheppard : "On Monday evening, about half-past eight, information of a renewal of the riot was brought to the office. I went with a detachment of about fifty policemen into Park Street. The mob were throwing stones, and the riot raging furiously. The mob were in the street, throwing stones, and the Irish mob were throwing stones, brick ends, tiles, etc., from the windows and roofs of their houses, in showers. The police halted until a light cessation, and then proceeded, the Irish continuing to throw from the houses. The doors and windows of the houses were smashed, and half the street was in ruins. The doors, shutters, window frames, and furniture were broken and used as weapons, and the sheets and blankets as banners. We charged the mob, and succeeded in quelling the disturbance in about three-quarters of an hour. I do not recognise any of the prisoners being present, nor do I know any of the police being injured at the time of the English mob were fighting against the Irish mob. Both were very violent. I should think there were some thousands of persons present. The street was covered with stones which had been used in the riot."

Police Constable [109] Tenwell saw Kilroy throwing stones from his house door. He ran into the house, and witness followed him and took him into custody. Police Constable [88] Fraser saw Heraghty throw stones at the police and the people in the street from a window of his house. Witness entered the house, and took him into custody. Police Constable [291] Smith apprehended Graham in consequence of the information he received. John Barton saw Graham throw fifty-sixty times. He was at the head of a mob of about seventy or eighty, all of whom ware throwing stones. Witness saw three men with their heads bleeding, and he gave information to the police. Witness also saw a boy with his hand badly cut.

Police Sergeant [10] Prosser apprehended Lee. He found him concealed under a bed in a garret. Kimberley gave him some information, in consequence of which he arrested the prisoner. George Kimberley saw Lee throw several brickends at the police. Police Constable Beckley received the prisoner Melville into custody. Henry Beach saw Melville throwing stones and bricks at the police from the top of a house in Park Street. Witness went into the house, but prisoner escaped into a pigstye, where he was apprehended by Police Constable Beckley. Police Constable Poynton [327] saw Allcock throwing stones, and took him into custody. Graham called witnesses, who stated that prisoner was asleep on a bed, half tipsy, at the time witnesses had stated he was throwing stones. It was considered that the persona who identified him might have made a mistake, and was discharged, but was immediately reapprehended for throwing stones at an earlier period of the day. The other prisoners were committed to Sessions, Smith being admitted to bail, one surety of £5.

James Moore [21], Edgbaston Street, gun screwer, was charged with throwing a stone at the Mayor [Mr. George Dixon], on Monday, in Park Street. Mr. Walter prosecuted, and called the following witnesses : Police Constable [326] George Harris : "I was in Park Street, with three other constables, shortly before five o'clock on Monday night. The Mayor was riding with the officers commanding the troops along Park Street. At the sight of the soldiers the row had ceased, though a large number of persons remained in the streets. The prisoner was standing, with about twenty others, at the corner of Park Lane. He saw him raise his arm deliberately and throw a stone or brickbat at the Mayor. The Mayor stooped, and the stone went about a foot over his head, and struck one of the soldiers. I had seen a stone pass close to the Mayor a second before, and it came from the direction in which the prisoner was. I apprehended him, and found a stone and half a brick in his band." Police Constable [304] Bishton saw the prisoner several times throw stones at the police. Corroborative evidence was given, and the prisoner was committed to the Sessions."
"Committal of More Prisoners"
Birmingham Journal : June 22nd 1867 Page 2