History of The Towers on Walsall Road at Perry Barr in Birmingham in the county of Warwickshire.

Some history of The Towers

The Towers is featured here within the pages for Perry Barr but is regarded by some as a Great Barr public-house. The building was erected on land to the east of Hamstead on the Walsall Road between Tower Hill and Perry Wood. 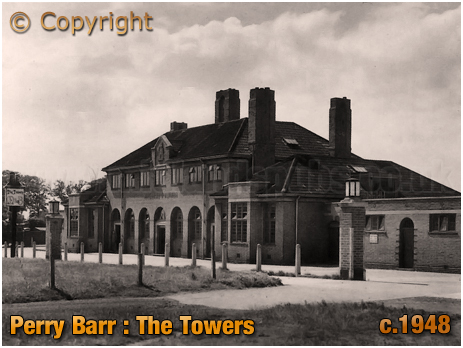 Mitchell's and Butler's erected the public-house to serve the growing inter-war housing development around Tower Hill and Perry Beeches. The Cape Hill brewery acquired the land from Handsworth Wood Estates Limited in April 1932, paying the sum of £2,000 for the land with an additional £500 for restriction and £500 on opening. Designed by Wood & Kendrick, a firm favoured by the brewery, The Towers was opened for trading on May 22nd 1936.

In order to swing a new full licence past the magistrates, Mitchell's and Butler's had to surrender three licences in other parts of the area. The licences of The Red Lion at Quinton, the Rose and Crown in Ryland Street and an outdoor in Greenway Street had a combined valuation of £4,964. 3s. 2d.

The Towers combined many of the facilities found in the large inter-war houses, the bowling green taking pride-of-place amid the garden and terrace.

The Towers was always a managed house, the first licensee being George Ayers. Born in November 1891, he had grown up in Havover Street at Highgate. He and his wife Clara had married at Smethwick in 1911 and had three children. He was the gaffer of the Old Bull's Head on Digbeth prior to moving out to the newly-constructed Towers Inn. I think he may already have been living with another partner by this time. Certainly, in July 1940 he petitioned for divorce, alleging that his wife, Clara Elizabeth, had committed adultery with Charles Albert Allport. The suit was undefended.

George and his second wife Alice remained at The Towers until 1948 when they handed over to Harry and Ellen Greatex, a couple who, after marrying in October 1931, had managed the Sun Inn on Bristol Street when William Elwood was the licensee before the Second World War.

Harry and Ellan Greatrex remained for a decade. Indeed, all of the early licensees of this house tended to remain for a decent term, suggesting that they were happy with their lot out in the suburbs. 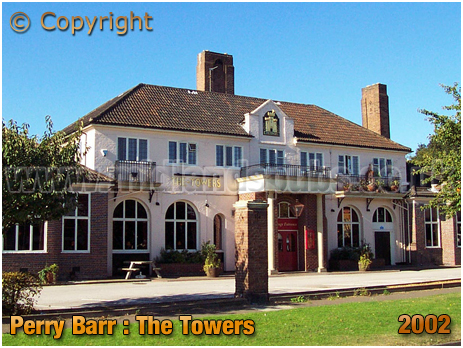 If you have a genealogy story or query regarding The Towers at Perry Barr you can contact me and I will post it here in addition to including your message within the website pages for Birmingham Genealogy.