History of the Rose and Crown on Ryland Street at Ladywood in Birmingham in the county of Warwickshire.

Some history of the Rose and Crown 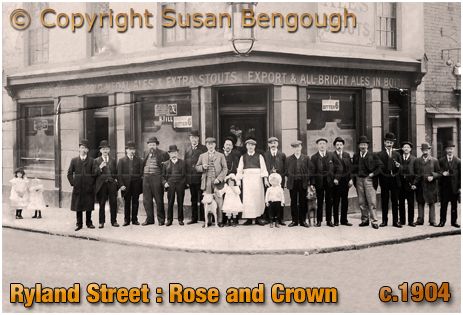 My interest in the Rose and Crown was ignited by Susan Bengough who, in April 2020, sent me this wonderful image of the Rose and Crown. She was researching a family member and going through a box of old photographs. She was not sure of the location of the public-house so sent it to me. I was excited to receive such a lovely photograph, particularly as it was the first time I had seen the Rose and Crown trading as a pub. Until this point I had only seen images of the building when it was trading as a café in the late 1950s and early 1960s. 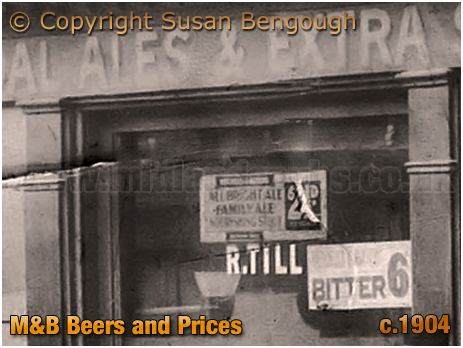 Mitchell's and Butler's advertised their ales and stouts on the wall of the Rose and Crown. However, it is interesting to note that the publican was very keen to promote the Cape Hill products by advertising the prices in the windows of the house. He was possibly trading in what was a very price-conscious locality. The All-Bright Ale was 2½d. per bottle and draught bitter 6d. In the main window on the Ryland Street frontage the publican had stuck his name on the glass .... R. Till. 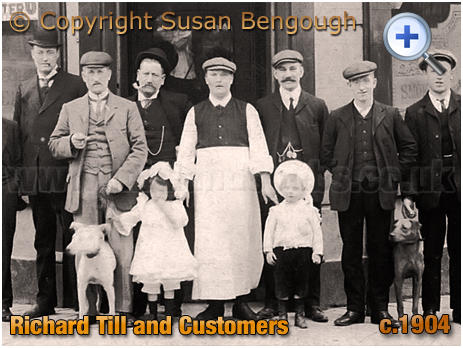 The publican in the photograph was Richard "Dickie" Till who worked as a manager for M&B. Indeed, during his career he racked up over forty years service with the Cape Hill Brewery. According to trade directories for Birmingham, he kept the Rose and Crown between 1901-14. Bowler hats were slowly replaced by caps as a head fashion at the end of the 19th and early 20th centuries. Being as some of the men are still sporting hats rather than caps I would say that the photograph was taken near the start of Dickie Till's time at the pub. I think I can perhaps see his wife in the reflection of the glass. The two children are almost certainly Doris and Harold Till. Doris was born in 1900 and Harold two years later. Looking at the girl, I would say that the photograph dates from around 1904-5. Featuring many of the pub's regular customers, it is a wonderful image.

Richard Till was born on 28th June 1871. He kept the Rose and Crown with his wife Kate throughout the Edwardian era. The couple moved to another building that was once a beer house known as the Rose and Crown before becoming an off-licence. This became the Crown Stores and was located nearby on the corner of Morville Street and Ruston Street. Richard and Kate Till kept the offie until the Second World War, a remarkable term of service working for the Cape Hill brewery. 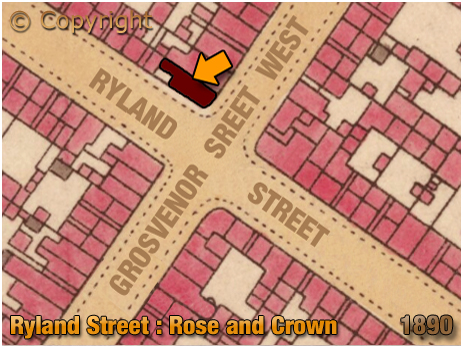 Looking back at the Rose and Crown, the beer house was one of just three businesses listed in Ryland Street North within White's Trade Directory published in 1845. The original address of the tavern was No.1 Ryland Street North. Joseph Such was trading as a boot and shoe maker at No.8 and Samuel Richards was listed as a shopkeeper at No.10. The directory lists the licensee of the Rose and Crown as Richard Higgs. He was listed as both builder and beer retailer. However, I believe that this was a typo by the publishers as the Rose and Crown had been run by Lewis Higgs since at least 1841. As a builder, he had been in partnership with Samuel Teague and, together, they were based in Grosvenor Street West. However, in January 1839 the partnership was dissolved, possibly as a result of Lewis Higgs needing capital to invest in his own licensed property.

Hailing from Worcester, Lewis Higgs was born in 1805 and married Susannah Sprague in November 1827 at Claines. After his partnership with Samuel Teague was dissolved, Lewis and Susannah Higgs kept the Royal Oak in Essington Street for a short period before moving to the Rose and Crown.

In July 1841 Lewis and Susannah Higgs organised a collection to donate to a fund for the widow and children of Frederick Skelding who had died when a wall fell on him when actively assisting with a fire in Broad Street. Lewis Higgs himself died of an ulcerated throat in June 1848 aged 43. His wife Susannah took over the running of the tavern and, in the census of 1851, was recorded as a retail brewer. She may have already been the brewster of the house before Lewis Higgs passed away. She would have been helped by some of her six daughters, particularly Eliza who was the eldest. Susannah Higgs also had two sons, Lewis and William. The family would later move to Ledsam Street. Lewis Higgs the younger would later become a noted glass cutter and operated a works in Icknield Port Road.

Thomas Harding was the publican of the Rose and Crown in the late 1850s. In August 1860 he was fined for having the beer house open at unlawful hours during a Sunday. He was succeeded by Henry Guise who upheld the tradition of the Rose and Crown being run by those who hailed from Worcestershire. Born in Bromsgrove in 1822, the former joiner married Elizabeth Johnson at St. Martin's Church in 1846. She originally came from Kidderminster. Henry Guise was a prominent member of the Birmingham Retail Brewers' Association but his career was cut short at the age of 42 when he died in February 1864. Widow Elizabeth Guise married the boat-builder Joseph Cotterall and, like the Higgs family, moved to Icknield Port Road.

Thomas Chandler, licensee of the Rose and Crown during the late 1860s, was also a builder by trade. Born in Stroud in Gloucestershire, he kept the beer house with his wife Jane throughout the 1870s. The couple had previously run the Horse and Groom on Digbeth. After their lengthy spell at the Rose and Crown, the family moved to Lloyd Street where Thomas Chandler enjoyed a long retirement.

The licence of the Rose and Crown passed to George Twell on April 5th, 1894. However, he did not remain long as he was one of those publicans who moved around a bit. The licence was transferred to Albert Smith in September 1895.

In the early years of the 20th century the Rose and Crown attracted the attention of Mitchell's and Butler's. Ellen Owen held much of the corner plot and it was with her that the Cape Hill brewery agreed a lease for the tavern in June 1902. The company renewed the lease with C. H. Eaves on September 1st, 1914, for a term of 24 years ending in December 1938. The public-house almost made it to the end of the lease agreement but the licence was surrendered by M&B in order to obtain a full licence for The Towers on Walsall Road between Perry Barr and Great Barr.

The Rose and Crown closed on May 21st, 1936. In the early years of World War Two the building had been converted into a café and was being run by Mrs. Mary Reay. 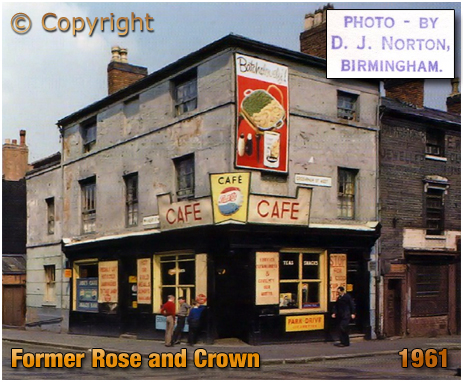 This photograph is displayed courtesy of the Photo by D. J. Norton website maintained by his son Mark Norton. This shows the building being used as a café named Joe's. He had put up a sign stating "STOP for a good cup of tea!" Joe's Café offered freshly-cut hot and cold sandwiches, along with hot meals. Plus, of course, Park Drive fags. Note the ghost lettering on the wall of the property next door. The traditional sign of three gold balls can be seen to the right of the Edwardian photograph. In that year the pawnbroker's shop was run by Mrs. Elizabeth Gateley. The ghost lettering has the name of the pawnbroker, jeweller and clothier E. W. James. This business occupied both 75 and 77 Grosvenor Street West. 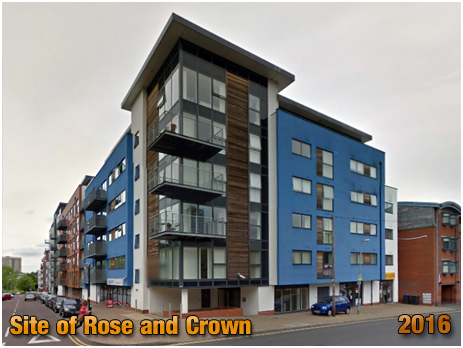 If you have a genealogy story or query regarding the Rose and Crown on Ryland Street you can contact me and I will post it here in addition to including your message within the website pages for Birmingham Genealogy.