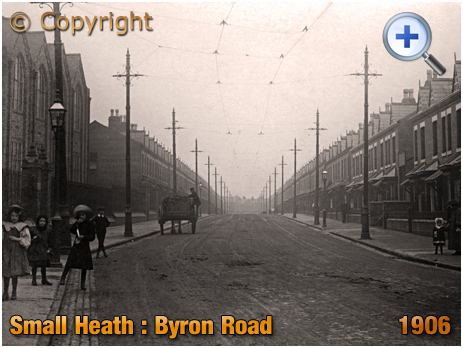 Captured in 1906, this photograph shows Byron Road in Small Heath, an extension one could say of Bolton Road that continued down to Waverley Road. The building on the left, the former Council School survived into the 21st century as the Small Heath School Sixth Form Centre. The pinnacled brick supports for the entrance gate seen here behind the children also remained. Everything else of Byron Road that can be seen in this image has vanished.

Just beyond the children is a horse and cart loaded with what looks like coal. The coal man is possibly Charles Henry Hodierne who operated as a coal merchant from premises close to the school. There is some wall lettering advertising this business on the end wall of the terraced housing. Charles had earlier traded in Lawley Street. Like his father, he had earlier worked as a carter when living in Garrison Lane as a young man. He lived there when he married Annie Nearey in 1894. 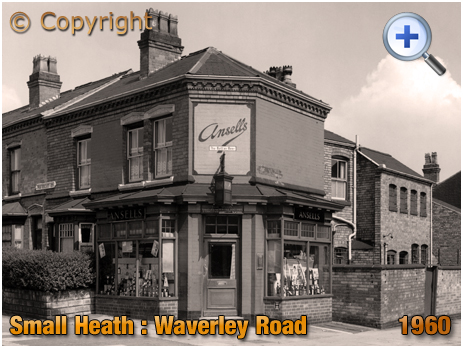 The corner of Waverley Road and Oldknow Road, including this off-licence, was lost when the Small Heath Highway was constructed. When this photograph was taken on August 8th, 1960, the shop was operated by Ansell's Brewery Ltd. and managed by Elsie Stubbs. The premises had formerly been used as a bakery and in 1908 this business was run by Frank Thornhill. In the Second World War the off-licence was run by Samuel and Florence Smart. The couple married at Aston's parish church in October 1907. Hailing from Wordsley in the Black Country, he had brought his glass-making skills to Aston. After the couple were married they first settled in Park Road. 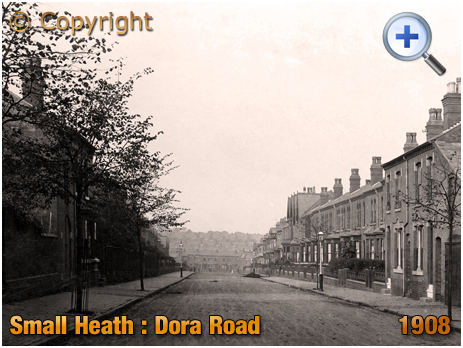 A photograph of Dora Road in Small Heath taken in 1908. The road ran from Coventry Road, opposite Victoria Park, to Somerville Road. The houses on the right that were built up to the pavement rather than featuring a small garden are still there and are Nos. 3 and 5. The property on the left has gone and a small block of flats stand on the site. At the time of this photograph Charles Worrall lived at No.5. However, shortly afterwards, the house was occupied by Herbert and Matilda Hawkins, and the couple's children Lillian and Wilfred. Sparkhill-born Herbert Hawkins worked as a lithographic transfer printer. Next door at No.3, the house closest to the camera, was home to Joseph and Freda Garner. Born in Stapenhill, Derbyshire, Joseph Garner worked as a shop assistant.

Further along the road the four tall gables on the right are also a key landmark of Dora Road. These are still standing and are Nos. 33 to 39. At the time of this photograph No. 33 was the home of Charles Henry Forster, a commercial traveller. His neighbour, Kent-born Thomas Long, was also listed with the same occupation. He lived here with his wife Emily and three children. No. 37 was occupied by the retired jeweller Alfred Cordingley and his wife Alice. The Cordingley family had previously lived on Warwick Road at Solihull. Here in Dora Road their next-door neighbour at No. 39 was Sidney Thomas Knowles.

"Dr. Alfred Kingsland, well-known Birmingham surgeon, at 477, Coventry Road, died at a nursing home in Edgbaston last night as the result of injuries sustained on Wednesday when he fell downstairs at his house and fractured his skull and collar-bone. Dr. Kingsland, who was about fifty year of age, was M.R.C.S. [Eng.], L.R.C.P, [London]."
"Fatal Accident"
Birmingham Mail : January 29th 1916 Page 4