History and Information on Snow Hill in Birmingham in the County of Warwickshire.

Some history of Snow Hill 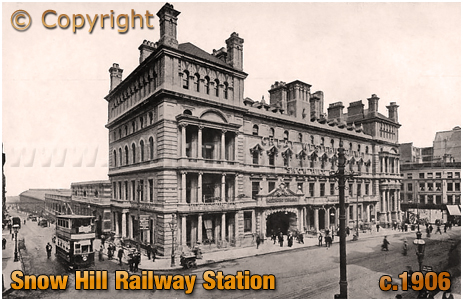 If you have a genealogy story or query regarding Snow Hill you can contact me and I will post it here in addition to including your message within the website pages for Birmingham Genealogy.

If you would like to share any further information on Snow Hill - Whatever the reason it would be great to hear of your stories or gossip. Simply send a message and I will post it here.

"The lingering death of Birmingham's Snow Hill Station was completed yesterday with one final blow from the shining sword of Mr. Peter Walker, the Environment Secretary. From the department's offices in Marsham Street. SW1. he announced his "unconditional consent" to the closure of the services between Birmingham and Wolverhampton Low Level and Birmingham and Langley Green. The station building has long since disappeared, but a handful of passengers can still be seen plodding to a remote platform from which Snow Hill has been conducting its last stand. From March 6th, even this skeleton facility will end. Mr. Walker stresses this aspect of the matter when he refers to "the poor patronage of the services and heavy financial losses." In addition to Snow Hill the following eight stations, already the haunt of vandals and scribblers, will be closed: Hockley, Winson Green, Handsworth, West Bromwich, Swan Village, Wednesbury, Bilston and Priestfteld. Wolverhampton Low Level will continue to function as a concentration depot for the area and will not be affected by the withdrawal of the passenger service. The British Railways Board has estimated that the cost of continuing the two services in 1972 would be £240,000, Wolverhampton accounting for £179,000 and Langley Green for £61,000. Earnings from fares have been put at £l3,000, leaving a deficit of £227,000 which would have had to be met by a grant. The board has also worked out what costs will be avoided in the future. In the first year after closure, it is estimated that £90,000 will be saved, which will rise to £125,000 in the fifth year. Additional costs of £22,000 for signalling and telecommunications will also be avoided. Mr. Walker's letter to the chief secretary of the British Railways Board sets out frequent alternative rail service between Birmingham and Wolverhampton, using New Street Street Station and Wolverhampton High Level and also the Stafford to Birmingham line."
"Walker Agrees to Close Snow Hill?"
Birmingham Daily Post : January 29th 1972 Page 18