History of the George and Dragon on Steelhouse Lane in Birmingham in the county of Warwickshire.

Some history of the George and Dragon 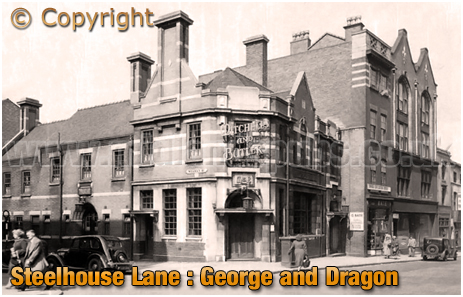 1953 - 1960 Frederick Thomas Stansbie
Note : this is not a complete list of licensees for this pub.

If you have a genealogy story or query regarding the George and Dragon you can contact me and I will post it here in addition to including your message within the website pages for Birmingham Genealogy.

"Mitchell's and Butler's Ltd. had conducted a canvass of 1,514 householders in an area of Small Heath and found that 62 per cent of those interviewed were in favour of a new public-house to serve the area, Mr. Eric Blain, for the firm, said at a public enquiry in Birmingham yesterday. An inspector of the Ministry of Housing and Local Government, Mr. J. D. Hossack, was enquiring into a proposal to remove the licence of the George and Dragon, Steelhouse Lane, to a site on the junction of Coventry Road and Mansel Road, Small Heath. There were more than 200 objectors to the proposal, including local residents, the United Kingdom Alliance and the Small Heath Baptist Church. Mr. F. D. Howarth said that the Licensing Planning Committee approved the scheme earlier this year. In the central redevelopment area a ratio of one public house to 750 people had been agreed; in comparable areas it was one to 900; one to 1,200 in the inner density zone and one to 1,700 in the outer zone. The proposed site was in the inner density area. Mr. Blain said that a quarter mile radius round the site had 4,800 people and no public house. The half-mile radius showed seven public houses to 18,010 people."
"Majority Claimed for New Public House"
Birmingham Daily Post : October 9th 1959 Page 21