Some history on Stratford Road at Sparkbrook, Sparkhill, Hall Green and Shirley in Birmingham in the County of Warwickshire 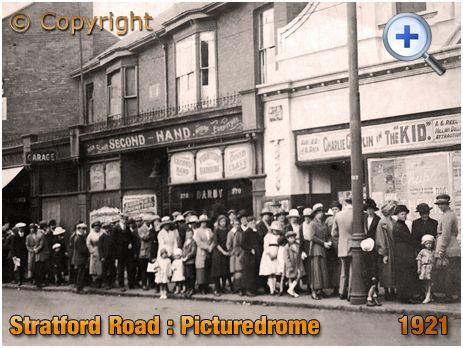 Although an original photograph, this image is a bit fuzzy so blame the person holding the camera in 1921. It was in August of that year that "The Kid," Charlie Chaplin's first full-length film as a director, was premiered at Birmingham here at The Picturedrome at Sparkhill, and also at the New Street Picture House and The Futurist. It was a fairly lengthy queue to get into the show, fuelled no doubt by the fact that the cinema has posted a sign stating "for 6 days."

The Picturedrome was opened around 1912-13 and stood on the north-east side of Stratford Road, close to the junction of Warwick Road. It was replaced by the larger Picadilly Super Cinema at the end of the 1920s, the new cinema opening in May 1930. It is possible to visualise the cinema as it was very similar to another Picturedrome at Liverpool, a building that has survived.

The manager of The Picturedrome at the time of this photograph was George Williams. He possibly got an earful from the trader next door as his customers could not get into his shop due to the queues! The furniture emporium was run by Fred Darby who sold both new and used furniture. The premises have survived into the 21st century. The last time I was along this stretch of the Stratford Road there was an Arabian grill called Damascus Legend trading here. At the extreme left of the photograph, the shop with a canopy extended over the pavement was that of the fishmonger William Homan.

"William Lester, butcher, 165, Stratford Road, pleaded guilty at Sparkhill this morning to having been drunk while charge of a horse and trap. On the night of the 14th May, Police Constable Bowcott, while on duty in the Stratford Road, heard a crash, and found that there had been a collision between the defendanf's trap and a cab. The door and windows of the cab were smashed, and one of the lamps broken. The occupant of the cab had his face cut. The defendant at the time admitted he was drunk, and offered to pay all the damage. A fine of 10s. and costs was imposed."
"A Stratford Road Collision?"
Birmingham Mail : May 28th 1906 Page 2