History of the Beehive on Suffolk Street in Birmingham in the county of Warwickshire.

Some history of the Beehive

The Beehive at No.38 and was located on the eastern side of Suffolk Street a few doors down from the junction of Cross Street, later Severn Street. 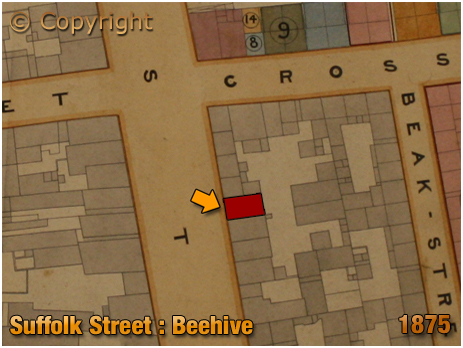 The Beehive was a beer house. The licence of the house was transferred from Solomon Cooke to Eliza Coldrick in April 1871. In the following month she was brought up in front of the Bench, charged with having her house open during prohibited hours. She was fined 20s. and costs.

Canadian by birth, Eliza Coldrick was a widow and lived on the premises with her sister, Mary Greaves, along with her six children. She re-married early in the following year to the brassfounder John Whelcher.

In December 1875 the licence of the Beehive was transferred from Jane Careless to George Haddleton. Jane Careless did not stay for a full year because she took over the licence in January. George Haddleton did two calendar years before handing over to William Daniels. In April 1877 he was found guilty of being drunk on his own licensed premises and fined 10s. and costs. His successor, William Vaughan, was also described as an "intemperate publican" when convicted of the same offence in July 1881. Four years later, in June 1885, he was once again hauled in front of the magistrates on a charge of being drunk on his own premises. The publican was fined 10s. and costs. Within a few months, in October 1885, Joseph Freeman was granted the licence of the Beehive.

If you have a genealogy story or query regarding the Beehive on Suffolk Street you can contact me and I will post it here in addition to including your message within the website pages for Birmingham Genealogy.

"Yesterday afternoon, Mr. Hawkes [Borough Coroner] held an inquest at his court, Moor Street, on the body of Joseph Studhulle Lupton, who met with his death by falling from a bedroom window in Suffolk Street early on Wednesday morning last. Sarah Ann Vaughan, landlady of the Beehive public-house, Suffolk Street, said the deceased had lodged at their house on and off for three years. He followed no regular employment. He attended auction sales, and got his living in a precarious way. Deceased was given to drink, and on Saturday night last he came home the worse for it. During Sunday he was taken very ill, and a doctor was sent for. He subsequently got better, and went to bed on Tuesday night in the same room as two other men. The next she heard of deceased was when someone came and kicked the door, and told her that he was lying on the pavement in the yard. George Brueton, 39 Suffolk Street, said he was going home about 12.30 a.m. Wednesday morning, and when he got to the top of the entry he heard a groan, and going in the direction from whence it came, he found the deceased lying insensible on the ground with only his shirt on. Witness called Mrs. Vaughan up, and then went in search of a crab, which he obtained, and deceased was taken to the Queen's Hospital, where he died a few minutes after admission. A verdict of "Accidental death by falling from a window" was returned."
"Fall From A Window in Suffolk Street"
Birmingham Daily Post : July 4th 1884 Page 7

"Henry Harcourt, alias Johnson, living at the Beehive Inn, Suffolk Street, Birmingham, and the author of "Prison Horrors," was charged under the Crime Prevention Act with failing to report himself whilst under police supervision. Superintendent Walker asked for a remand until Friday, as the officer who had charge of the case was at the Warwick Assizes. Prisoner: "Your worships, I have to say..... Mr. Rowlands [magistrates' clerk]: "We cannot go into the merits of the case at the present moment." Prisoner: "Well, your Worships, I say I'm not guilty, I ask for a telegram to be sent either to Bow Street or to Mrs. Weldon, whose late secretary I am, and they will tell you I am not guilty. I came out of penal servitude in 1877, and never was on ticket-of-leave or under police supervision. Telegraph. I say, to Sergeant Randall, of Scotland Yard, who will tell you that he met me at Ramsgate selling my pamphlets on the day of the fight between French and English fishermen, and he never said anything to me. Mr. Adcock, the solicitor, of Birmingham, who conducted Mrs. Weldan's case when she was expelled from the Town Hall during M. Gounod's visit will, I think, recognise me if you send to him. It is an easy matter to send to Scotland Yard, and you'll soon have an answer. I've very great reason to complain. I have three little Motherless children dependent upon me, two of whom are cripples. Am I to be considered an outlaw all my life? Is any drunken policeman to apprehend me in each quarter of this and other towns? Mr Rowlands: "We cannot go into that. The Bench are now considering the questions of a remand. Do you object to a remand?" Prisoner: "I do object, strongly object, emphatically object. It is outrageous, it is a disgrace to the most barbarous country in the world, much less to a country which is presumed to be the most civilised in the world." Mr. Rowlands: "Then we must call some evidence." Superintendent Walker stated that the prisoner was arrested on Monday night by Police Constable Hodson on a charge of failing to report himself, he being a convict on ticket-of-leave. Prisoner admitted to the constable that he had failed to report himself. Prisoner [interrupting]: "Oh dear, no, nothing of the sort." Superintendent Walker: "If it is the wish of the Bench I will send at once to Scotland Yard." Prisoner asked that if he was remanded he should be admitted to bail on his own recognisances. The police had £28. belonging to him, and also his bank-book. It was essential that he should have bail because of his children, and he was also in a delicate state of health himself. Mr. Baker : "The Bench will remand you until Friday, and will admit you to bail on your own recognisances." On being asked by the magistrates' clerk for his name and address, the prisoner stated that had had to use two names on account of his poor children, adding, in emphatic tones, "Otherwise they would have to suffer from the finger of scorn that is laid upon me. It is my poor motherless children that have to suffer." Mr. Baker: The Bench have done with the case now, and you can go." The prisoner then left the court."
"Charge Against Mrs. Weldon's Late Secretary"
Birmingham Daily Post : November 24th 1888 Page 3