History of the Red Lion on Suffolk Street in Birmingham in the county of Warwickshire.

Some history of the Red Lion

The Red Lion, or Old Red Lion, was located on the eastern side of Suffolk Street between Swallow Street and Navigation Street. The tavern, along with a swathe of housing, was demolished to make way for the Birmingham Municipal Technical School which opened in 1895. 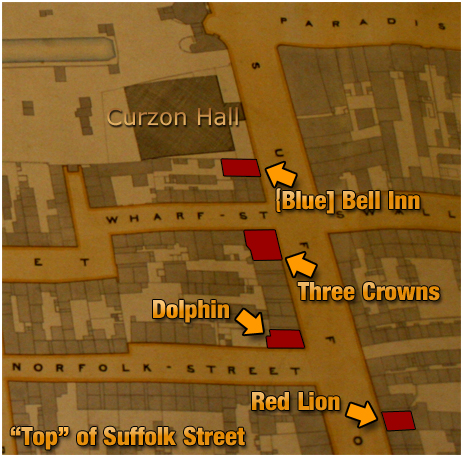 Born at Rock in Worcestershire in 1794, Thomas Southall was both victualler and coal merchant, no doubt the latter business was conducted across the road at the wharf. 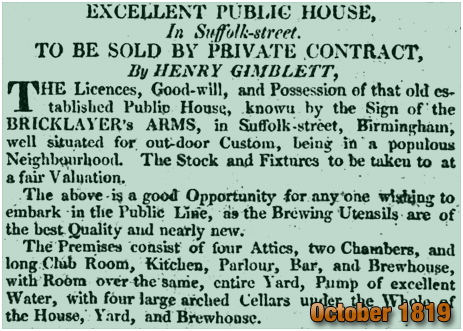 Benjamin Pearce was also a coal merchant when running the Bricklayers' Arms some years before. The above sale notice provides a glimpse of the business when he was publican. The brewing equipment for producing homebrewed ales were nearly new and the cellaring was extensive.

Thomas Southall, along with his wife Mary, kept the Red Lion for donkey's years. The couple lived on the premises with eight children and a domestic servant. In the early 1850s the latter role was served by Eliza Hemming.

Thomas Southall was still running the Red Lion in his seventies when he was described as a cripple. Hugh Murray, a 23 year-old coach-spring maker, took advantage of the publican's health in January 1866 when he walked into the Red Lion and stole the till-drawer and ran out. However, the police were quick to apprehend the thief and arrested him in the Star and Garter. Because of a previous conviction, he was sentenced to seven years in prison. 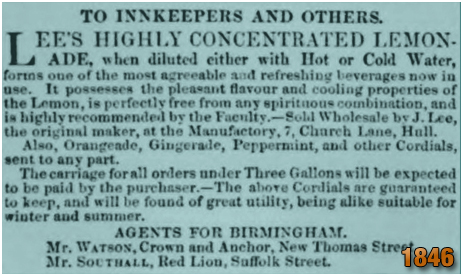 Frederick Hughes was the last licensee of the Old Red Lion. Before the building was demolished in order for work to commence on the Birmingham Municipal Technical School in 1893, he sold the fixtures and fittings of the house in September 1893.

If you have a genealogy story or query regarding the Red Lion on Suffolk Street you can contact me and I will post it here in addition to including your message within the website pages for Birmingham Genealogy.

"Thomas Davis [26], labourer, 22, Speaking Stile Walk, was charged with being drunk and using obscene language, and Thomas Rooney [21], boatman, 5 court, 8 house, William Street, was charged with being drunk and disorderly and assaulting the police. About half-past nine on Saturday night, defendants were turned out the Red Lion, Suffolk Street, and both of them used bad language in the street. On being removed to the lock-up, Rooney became very violent and assaulted two of the officers there, kicking one of them and biting the other on the hand. He was continuing the attack, when Davis interfered. In consideration of his interference on behalf of the police, Davis was discharged. Rooney, who bad been many times convicted, chiefly for assaults, was sent to gaol for three months."
"Assaulting The Police"
Birmingham Mail : November 14th 1881 Page 3

"John Delaney [25], Navigation Street, labourer, was charged with assaulting William Shipton on the 24th September. Mr. B. Hebbert appeared for the defence. Prosecutor stated that he was in the Red Lion public-house, Suffolk Street, when the prisoner asked him to stand him a drink. Prosecutor paid for a quart of ale, and immediately afterwards lost his pocket handkerchief. He charged prisoner with stealing it, and the latter replied by knocking him down, and after he got up and went out, followed him and struck him again. The defence was that the two men were drinking together in the public-house, and the row was caused by the prosecutor saying something disparaging about prisoner's wife. The assault being slight, a fine of 2s. 6d. and costs was imposed."
"Assault in a Public-House"
Birmingham Mail : October 1st 1883 Page 3