History of the Three Crowns on Suffolk Street in Birmingham in the county of Warwickshire.

Some history of the Three Crowns

Known to exist at the beginning of the 19th century, the Three Crowns Inn was located on the western side of Suffolk Street on the southern corner of Wharf Street. The latter thoroughfare would later form part of Holliday Street. The Three Crowns was certainly in existence by 1801 when Sarah Skelding was the licensee. I would like to think that she was also a brewster. Unusually, the licence of the public-house changed several times during the early years of the 19th century with some publicans staying only for one year. A high turnover of licensees was generally a trend that occurred in less successful and unstable periods in the Victorian era. 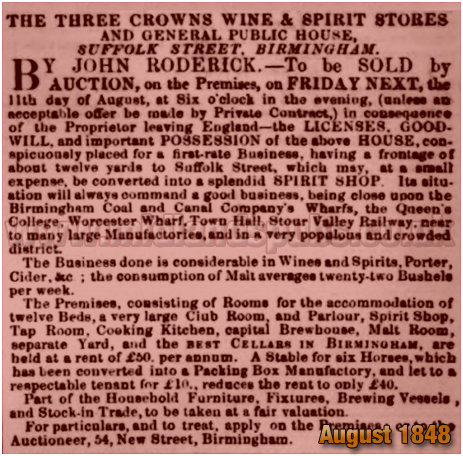 A glance of the map shows that the Three Crowns occupied a large corner plot. This advertisement for an auction of the Three Crowns Inn provides an excellent picture of the business in 1848. It is possible to gauge the amount of beer being sold in the tavern as the publican was getting through twenty-two bushels per week. This suggests that around 1,400 pints of ale were being sold, representing good trade by all accounts.

The auction notice provides a good description of the premises that included extensive accommodation space and what was claimed to be "the best cellars in Birmingham."

The Twist family were involved with the Three Crowns Inn from 1810 when Joseph Twist took over the licence. Other members of the family were running public-houses in Birmingham. Joseph Twist married Lucy Lawrence Price in October 1809. The couple leased the building and, although running the Three Crowns for spells, would install somebody else to manage the place. I think this may have been because of other business interests. I think Joseph Twist was involved at the Coach and Horses on Spring Hill. In the 1820s the Three Crowns was managed by John Swinburne.

Joseph and Lucy Twist, along with five children, were living at the Three Crowns at the time of the 1841 census. After a long illness Joseph Twist died in December 1843. A notice in the Birmingham Journal announced he was in his 63rd year and that he was "much respected by a large circle of friends." His wife Lucy, who was ten years younger, died four years later in December 1847.

William and Susannah Plume were running the Three Crowns in the early 1850s. Born in 1819 at Bermondsey in Surrey, William Carter Plume came to Birmingham as a young man and found work in the High Street. He married Susannah Thompson in 1850 by which time he had been running the Theatre Tavern on Lower Temple Street for a number of years. In later years, as a resident of Gough Road, William Plume became a brewery commercial traveller and agent. He died in December 1878.

George Hobson was licensee of the Three Crowns in the late 1850s and throughout the 1860s. In addition to running the public-house with his wife Elizabeth, he also worked as a brassfounder. Elizabeth Hobson was granted the licence of the Three Crowns in October 1871. Son James would also run the busy tavern that benefited from spin-off trade from the nearby Curzon Hall. 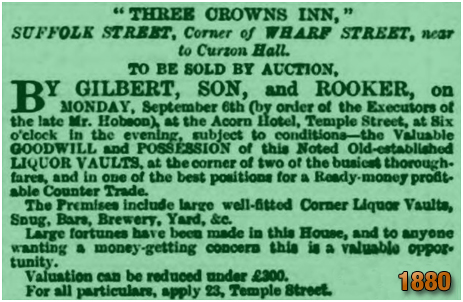 The last tenant of the Three Crowns was Thomas Albert Mee, who had taken over the tenancy in July 1884. However, he was one of many to be affected by the enlargement of the Worcester Wharf Goods Station operated by the Midland Railway. The company made an application to Parliament in 1881 to extend their line to New Street Station. When work on this project commenced, the Midland Railway then applied to compulsory purchase property and land between Suffolk Street, Severn Street, Wharf Street, and the Worcester Wharf. This resulted in the purchase of eight licensed houses in the affected area with four licences being abandoned.

As tenant, Thomas Mee applied for a transfer of the victualler's licence of the Three Crowns to premises being erected across the street on the corner of Swallow Street. This new building was owned by Ind Coope Ltd.. It would appear that Thomas Mee was refused his application.

If you have a genealogy story or query regarding the xx on Suffolk Street you can contact me and I will post it here in addition to including your message within the website pages for Birmingham Genealogy.

"John Perrott, residing in Suffolk Street, was charged with breaking into the warehouse of Mr. Fletcher, Fordrough Street, on the 20th of August. Mr. Soden prosecuted, and Mr. Dugdale [for Mr. Elers] defended the prisoner. In stating the case, Mr. Soden said, on the morning in question a policeman, on duty in Fordrough Street, saw a light in Mr. Fletcher's warehouse, and on going to the back he saw the prisoner and two others on the premises. One of the men got through the window, and the policeman apprehended him. The others escaped. Shortly after the policeman found a coat on a wall at the back of the premises, and in the pocket was book, containing letters addressed to the prisoner, John Perrott, Three Crowns, Suffolk Street. Mr. Soden then called Police Constable John Poynton, who was on duty on Sunday, the 20th of August, 1865, in Fordrough Street. About twenty minutes past two he saw a light in Mr. Fletcher's premises, and he then went to the back of the warehouse up Mr. Edmunds's entry in Navigation Street. He saw three men in the warehouse. The prisoner was one of them, and had his coat off, and one his shirt sleeves turned up. Witness sent for another policeman. The light in the warehouse was then put out, and one of the men came through the window, and witness apprehended him and took him to the police station. Witness then went back, and on a wall separating Mr. Edmunds's premises from those of Mr. Fletcher he found a coat produced, and in the pocket of the coat was a pocket-book. Last Saturday witness saw prisoner with several others in the lock-up, in Moor Street, and identified him as the man he had seen in the warehouse. Ezekiel Edwards, tailor, said he made the coat produced. He believed he made it for prisoner about eighteen months ago. Police Sergeant G. Stevens apprehended the prisoner at the Circus, in Suffolk Street, Tuesday last, and said: "You will be charged with breaking into the warehouse of Mr. Fletcher, in Fordrough Street, on the 20th of August last." Prisoner replied: "I know nothing about it." On the way to the station witness said: "We have found a coat of yours with a pocket-book and some letters;" and prisoner said: "I had two stolen from the stable." Joshua Haycock, warehouseman to Mr. Fletcher, locked up the warehouse all safe Saturday evening, and was called up on Sunday morning and found that a door had been broken up, but nothing was missed. Mr. Dugdale, in addressing the jury, urged that there was no evidence of the stealing, and as to the identity of the prisoner that rested on the unsupported testimony of the policeman, who that early hour of the morning might have been mistaken. The jury found the prisoner not guilty."
"Breaking into a Warehouse in Fordrough Street"
Birmingham Daily Gazette : April 13th 1866 Page 3