History of the Wheatsheaf Inn on Suffolk Street in Birmingham in the county of Warwickshire.

Some history of the Wheatsheaf Inn

The Wheatsheaf Inn, sometimes listed as the Wheatsheaf Tavern, was located on the eastern side of Suffolk Street on the northern corner of Cross Street, later Severn Street. 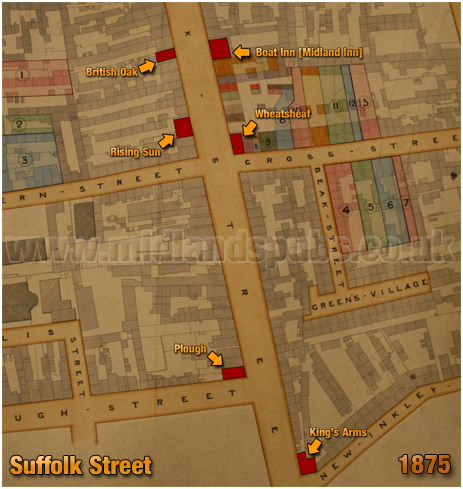 I have not researched the Wheatsheaf in great detail but I have posted a few bits and bobs here. The earliest record I have found for the Wheatsheaf Inn is the licence register for 1806 which recorded Paul Gardner as the licensee. As a widower he married Mary Yates at Saint Martin's Church in March 1825. 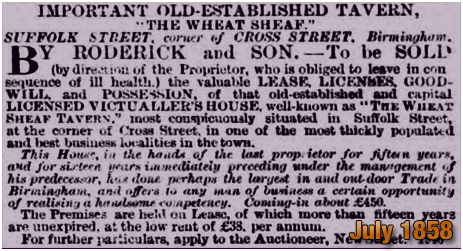 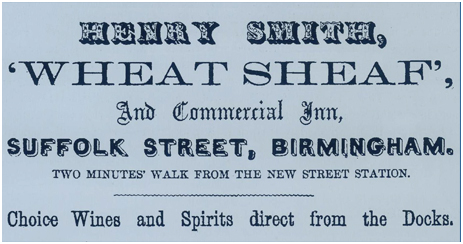 Henry Smith [see above advertisement] was mine host of the Wheatsheaf Inn during the early 1860s. He was robbed of jewellery and other articles in December 1863 by a labourer named James Smith who was committed to the Sessions for trial.

In the late 1860s the Wheatsheaf Inn was run by a couple from the East Midlands. Licensee Edward Bloodworth hailed from Loughbourough and his wife Harriet was from Lenton near Nottingham. They had previously lived at the Commercial Inn at Beeston where Edward worked in the printing trade as a compositor. Harriet died at the Wheatsheaf in April 1875. The publican gave up the pub and moved in with his sister at Great Colmore Street where he died within a few months. 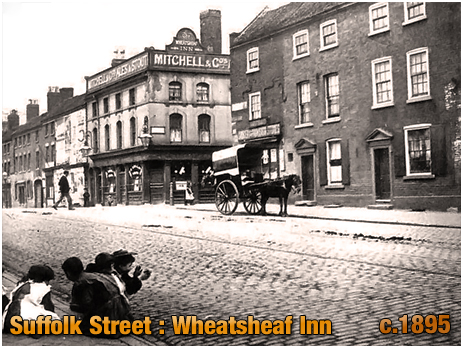 This photograph is thought to date from 1895. Advertisement boards can be seen for Henry Mitchell & Co. Ltd. The Cape Hill brewery leased the building in July 1875. Paying £6,000, the company acquired the freehold in December 1897. Once they had secured a long-term future for the public-house the company commissioned the architectural practice of Wood & Kendrick to make some alterations and improvements to the building. 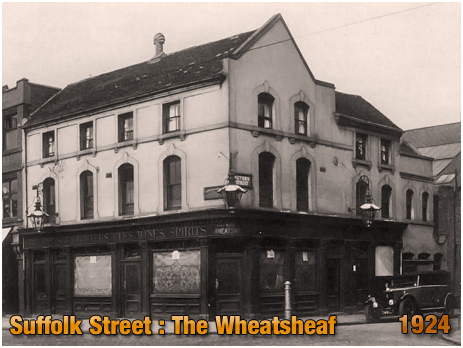 Phoebe Crockett stands out as she was a woman licensee in a long list of male publicans of The Wheatsheaf. Born Phoebe Ellen Harrison in Leamington in 1884, she married Percy Crockett at King's Norton in 1908. The couple managed several public-houses for Mitchell's and Butler's. In 1911 they were running the White Hart on Paradise Street. They later moved to the Crown Inn on Hill Street where Percy Crockett died in January 1933. As a widow, Phoebe moved to The Wheatsheaf and kept the public-house during the mid-1930s. She married Harry Garner in July 1937 and the licence of The Wheatsheaf was transferred to him in September of the same year.

Phoebe and Harry Garner remained at The Wheatsheaf until October 1938 before moving to The Granville on Broad Street. After the Second World War the couple were managing the New Talbot on the Hagley Road near Bearwood. They remained in the licensed trade and in 1958 they were running the Cross Keys Inn at Hagley in Worcestershire. Phoebe fell ill there in 1958 and died in the Corbett Hospital at Staffordshire in 1958. Harry remained as publican of the Cross Keys Inn. However, he died four years later at Wordsley Hospital. 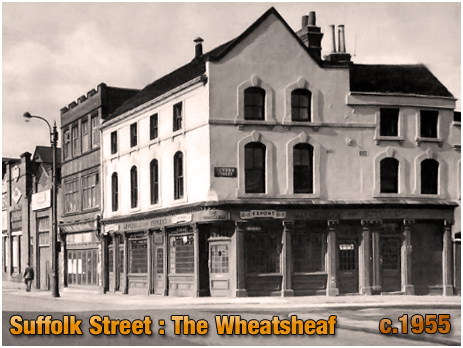 I have read that The Wheatsheaf closed in 1960. However, the building was still standing in September 1962 when it was reported in the Birmingham Daily Post that the public-house, along with Nos.43-45 Suffolk Street were due to be demolished. In 1965 the licence of the property was transferred to The Windmill on Hurst Street. 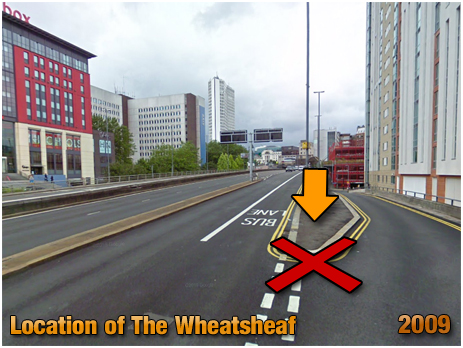 If you have a genealogy story or query regarding the Wheatsheaf Inn on Suffolk Street you can contact me and I will post it here in addition to including your message within the website pages for Birmingham Genealogy.

"On Tuesday last, an inquest was held at the Wheatsheaf Inn, Suffolk Street, on the body of a poor woman, named Mary Newey, who died suddenly on the preceding Sunday. From the evidence of the deceased's husband, who is a comb maker, residing in 19 Court, Suffolk Street, it appeared that his wife often complained of her head and did so on Sunday morning, when she said she would go and lie down. That was about twelve o'clock noon, and on his going upstairs, in the course of an hour, to see if she would have her dinner, he found her lying on the floor dead. Mr. Wilcox, surgeon, who had been instantly sent for, was of opinion that the deceased had died from apoplexy; and a verdict to that effect was returned."
"Apoplexy"
Birmingham Journal : December 13th 1845 Page 5