History and Information on Summer Lane at Aston Newtown in Birmingham in the County of Warwickshire.

Some history of Summer Lane 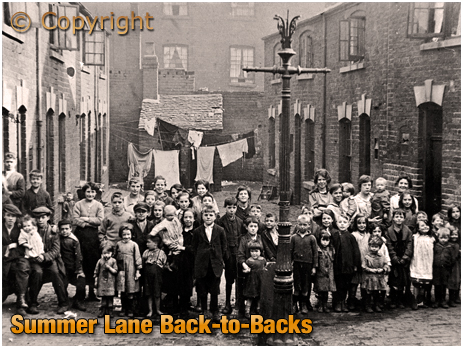 If you have a genealogy story or query regarding Summer Lane you can contact me and I will post it here in addition to including your message within the website pages for Birmingham Genealogy.

If you would like to share any further information on Summer Lane - perhaps you drank in one of the pubs in the past? Or maybe knew a previous publican running one of the boozers? Whatever the reason it would be great to hear of your stories or gossip. Simply send a message and I will post it here.

"Mr. Oliver Peberton [coroner] held an enquiry, yesterday, at the Victoria Courts, into the circumstances attending the death of John Clarke [42], 2 Court, 3 house, Brass Street, pearl-button maker, who was alleged to have been stabbed in Summer Lane on Saturday night. The man George Costello, who is charged with causing Clarke's death, was present in custody. Jane Clarke, the widow, said that at half-past nine on Saturday night Costello came into her house and said, "I have got into the right house at last." He accused witness of harbouring his wife. She denied harbouring Costello's wife, but said that she took her in as a friend. Costello then turned to witness's husband, and said he was as bad as his wife for harbouring Mr. Costello. Witness's husband picked up a poker from the fender, and Costello then knocked witness down with a blow from his fist. Costello left the house and shouted "witness" all down the yard. A little later witness went on an errand. She met Costello in Brass Street. He used bad language to her, and kicked her in the back. After going into a neighbour's witness went home, and informed her husband of what had occurred. He picked up a long poker, and on leaving the house remarked, "Oh, he's been at it again." The next thing witness heard was that the two men had been fighting, and her husband had been injured and taken to the General Hospital. Sarah Ann Kimberley, married, 2 Court, 5 house, Brass Street, said that Clarke's house was opposite hers. On Saturday night she was in Clarke's house when Costello came in and asked for his wife. Costello used foul language and struck Mr. Clarke. Deceased looked for a poker, and Costello left the house. About an hour later Mrs. Clarke came to witness's house. She fainted, and when she came round she said that Costello had met her in the street and punched and kicked her. Clarke, who was in the house, said "I cannot stand this any longer," and went out of the house. Jane Skidmore, wife of William Skidmore, baker, 251, Summer Lane, said that shortly after eleven on Saturday evening she saw Costello and Clarke coming from an entry in Moorsom Street. The men went into the horse road, and appeared to be fencing with what looked like pokers. Costello started to walk along Summer Lane, and Clarke followed him, using foul language. She saw Clarke strike Costello with the poker, and Costello then struck Clarke several blows. Clarke fell to the ground, and whilst lying there Costello struck him twice in the region of the shoulder. The blows were given like stabs. Clarke cried out, "I have done; you have done for me." Costello was drunk, and Clarke seemed the worse for beer. William Skidmore, the husband of the last witness, said that he was in his house on Saturday night, and heard a clashing noise in the street. On going to the front he saw Clarke and Costello quarrelling. The former was using threatening language, and attempted to strike Costello with a poker. The blow did not reach Costello, who thereupon made two "digs" at Clarke's shoulder. Clarke fell down, and was lying on his back when Costello struck him. Costello walked away, and Clarke got up and staggered across the road. John Chesshire said that he saw Clarke lying in the gutter, and Costello bending over him. Costello struck Clarke two blows with some instrument he had in his hand. Witness pushed Costello away. With assistance witness took Clarke to the hospital. Police Constable Thomas said that he arrested Costello early on Sunday morning. When charged he said, "I took something off him, and struck him with it. I don't know what it was." Inspector Alvey proved the taking of Clarke's dying depositions, which have appeared in the Post. Mr. Lewarne, surgeon, General Hospital, said that when deceased was admitted, he found he was suffering from a punctured wound between the ninth and tenth ribs, two inches from the spine. Later on witness found another small punctured wound on the right side of the chest, under the arm. There had been a large escape of blood. The man said that he had been stabbed in the back. He gradually got worse, and died on Tuesday morning. Mr. Henton, General Hospital, said that he made the post-mortem examination. The wound near the spine entered the chest cavity, and penetrated the lung. The cause of death was internal haemorrhage from the wound to the right lung. The wound could not have been inflicted by a poker; it must have been done by a pointed and cutting instrument. In reply to the coroner, Costello said that he did not wish to say anything. In summing up the Coroner said that they could not help thinking in the two cases which had been before that Court this week, in which life had been taken, that there was an amount of ferocity, cruelty, and even cowardice in the attacks that was lamentable, and aggravated the offence. A verdict of "Manslaughter" against Costello was returned, and the Coroner committed him to the Warwick Assizes."
"The Fatal Affray at Summer Lane"
Birmingham Daily Post : September 2nd 1892 Page 7