History and Information on Tower Street at Hockley and Newtown in Birmingham in the County of Warwickshire.

Some history of Tower Street 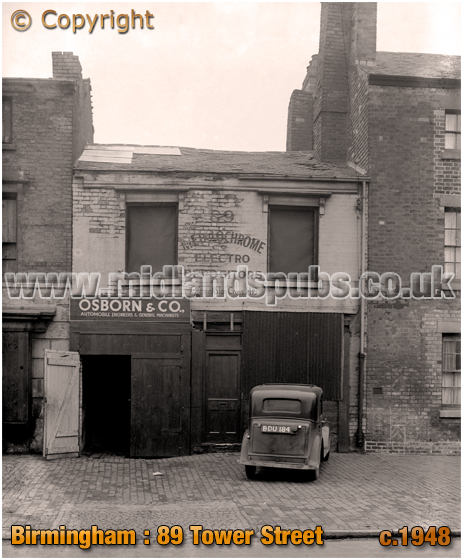 If you have a genealogy story or query regarding Tower Street you can contact me and I will post it here in addition to including your message within the website pages for Birmingham Genealogy.

If you would like to share any further information on Tower Street - perhaps you drank in one of the pubs in the past? Or maybe knew a previous publican running one of the boozers? Whatever the reason it would be great to hear of your stories or gossip. Simply send a message and I will post it here.

"An elderly roan of the tramp class was charged at Birmingham Police Court today with threatening to murder an old woman named Ellen Robinson, Tower Street. Prisoner's name is William Walder, and, as he is of tall and powerful physique, his appearance is somewhat disconcerting. Mrs. Robinson told a moving story. "Just gone ten o'clock on Sunday night," she said, "I was a-sitting at the table with a carving-knife in my hand, cutting a bit of meat for my supper, when this 'gentleman' walked in. He looked at me, I looked at him, and then says, with an oath, 'Missus. I'll murder you.' Last night he peeps through the door again, but I says, 'Oh, you dirty scamp, it's you, is it?' and he went away." It appears that the prisoner has been terrorising Tower Street and the neighbourhood by making faces through windows and otherwise behaving in a very alarming manner. He was arrested last night by Police Constable White 134C]. In default of paying the costs and finding sureties for good behaviour, the prisoner was committed for a month's hard labour."
"The Face At The Window"
Birmingham Mail : September 11th 1906 Page 2