The Crown and Anchor was located on the eastern side of Watery Lane, north of Keeley Street and close to the bridge spanning the Grand Union Canal. 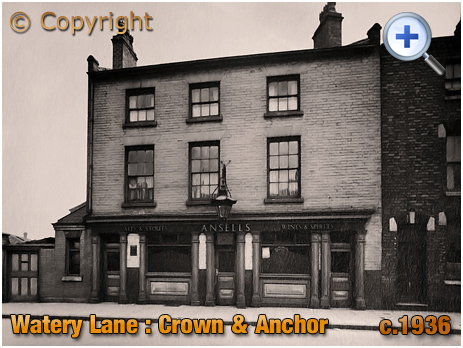 An inter-war photograph of the Crown and Anchor on Watery Lane at Bordesley, something of a "Peaky Blinders" pub where, at times, gangs fought and caused general mayhem. The name of the pub was derived from its close proximity to the Britannia Wharf on the Grand Union Canal.

The Crown and Anchor forms part of the story of Dare's Brewery.

Licensees of the Crown & Anchor

"Mr. Hawkes held an inquiry on Saturday at the Crown and Anchor, Watery Lane, on the body of a boy named James Isaac Barratt [9], 5 Court, Watery Lane, whose dead body was found in the canal near Watery Lane. On Thursday deceased was sent by his mother to collect coal which had been upset from the boats on the canal side. Shortly afterwards his basket was found on the side of the canal, but deceased could not be found. Information was given to the police, and the body waa found in the water. The jury returned a verdict of "Found drowned."
"Death From Drowning"
Birmingham Daily Gazette : November 19th 1877 Page 5