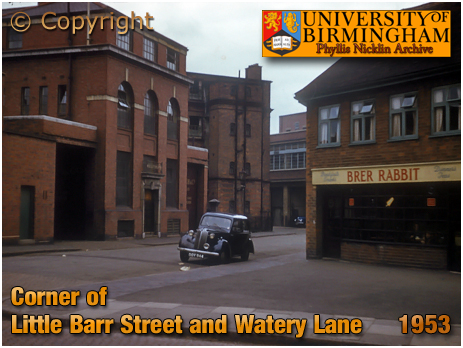 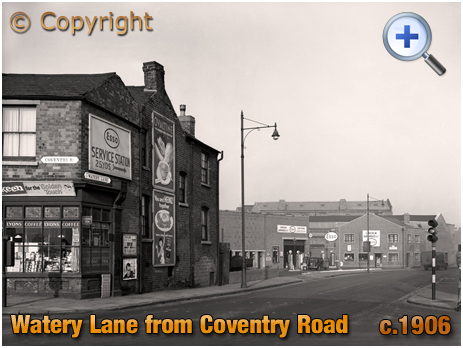 Captured in January 1958, this photograph shows Watery Lane from Coventry Road in Bordesley. Along Watery Lane on the left-hand side is the service station of Lincoln Garages Limited, the forecourt retaining Esso petrol. The grocery shop on the corner looks like a nice tidy store. The shopkeeper can be seen through the window. In 1940 the shop was kept by Alfred Henry Robinson. At the end of the Edwardian period the premises were run by the baker Edgar Kibby.

"A burglary, which has given the officers of the Detective department of the Birmingham Police Force an opportunity of displaying their sagacity in no mean degree, was committed early yesterday morning, at the house of John Condy, a tailor, carrying on business in Watery Lane. Only a few hours after the robbery had been reported to the police, Detective Sergeants Mountford and Seal, two shrewd officers, "scented out" and apprehended the burglars, recovered the whole, or nearly so, of the property, seized a number of house-breaking tools and implements, and took possession of a large amount of property, which to all appearance is the result of several robberies. The quiet and ingenious manner in which the burglary was committed shows that it was the work of those who were adepts at their trade. A piece of wood was taken clean out of the back kitchen shutters, leaving an aperture large enough to admit a man's hand. The bolts inside were then unfastened, and the window having been opened, free access was obtained to that part of the house. The robbers then worked their way slowly but surely to the front shop, where they packed up a number of ready-made over and under coats, trousers, waistcoats, rolls and remnants of broad and other cloth, and a number of other articles connected with the business of a tailor. This having been done without even disturbing the inmates of the house, the burglars watched a favourable opportunity, and then removed their plunder safely to their rendezvous before three o'clock. Mr. Condy rose between six and seven o'clock, and on entering the kitchen discovered that his house had been broken into. A clock, which invariably stopped when acted upon by a draught of air had, he also observed, ceased to tick, and had stopped at a few minutes after two, and he at once concluded that the thieves had opened the window at that time, Having missed his goods from the shop, Mr. Condy gave information of what had occurred to the police. Detective Sergeants Seal and Mountford thereupon at once instituted enquiries, and after scouring the well-known haunts of Birmingham thieves for a considerable time, came upon Mr. Condy's property in a house in Skinner Lane, occupied by a "professional" known to the police as "Pussy Cat," and a woman with whom he cohabits, named Mary McDonald, who is also known as a "shop lifter," "Pussy," whose real name is Rogers, the officers were informed was gone to church, but the woman in his absence "allowed" them to examine the house. They had not been engaged in this operation long before they found, in addition to the coats, cloth and other property, which had been just taken from the shop in Watery Lane, a carpet bag concealed beneath the bed. Judging that it contained something in the house-breaking line, they opened it, and found it filled with almost every implement useful to burglars. There were skeleton keys of all sizes, screw drawers, centre-bits, jemmies and a variety of other tools too numerous to mention. Continuing their search, the officers found a clothes box, which contained, amongst other things, a double-lined dress skirt, used by professional shop-lifters, a number of ham bags, pieces of silk, bed linen, wearing apparel, brooches, scarf pins, watch chains, silk handkerchiefs, bracelets, and a number of pawn tickets. These goods were all seized, as likely to be the proceeds of different robberies. Seal, leaving Mountford in charge of the woman and house, then obtained the assistance of Detective Inspector Kelly, and went in search of "Pussy Cat" whom they discovered sitting with a very demure countenance in the chapel at Witton Cemetery, where he had been attending a funeral. He was beckoned to come outside, and at length did so, He was then handcuffed without any form of ceremony, and conveyed to the Moor Street lock-up as soon as possible. Seal then went to relieve Mountford, who in the mean time had gathered enough from the woman's conversation to known that one "Toddy Lister" or Thomas Chapman was "in the mess." Having safely lodged the woman McDonald in prison, "Toddy" who is a well-known, but not very highly respected character, was apprehended by the officers in a house in Masshouse Lane. No stolen property, however, was found upon him, but the police have some information in their possession, which will no doubt connect him with the burglary in Watery Lane. The prisoners will be brought up before the magistrates this morning."
"Daring Burglary in Watery Lane"
Birmingham Daily Post : November 23rd 1863 Page 2