History and Information on Wharf Street at Birmingham in the County of Warwickshire.

Some history of Wharf Street

Wharf Street is something of a 'lost' thoroughfare, though in name only - the road would later form part of Holliday Street, between Bridge Street and Suffolk Street. However, rather than listing its half dozen taverns and brewery within Holliday Street, I am giving a new lease of life to the former name of this old Birmingham thoroughfare. Indeed, to conveniently forget about its time as Wharf Street would be doing a disservice to the importance of the canal, the inland waterway being the reason for the old name.

Supervised by James Brindley, the Birmingham Canal was constructed between 1768 to 1772 and a wharf, dubbed Paradise Wharf or Old Wharf was created in the town centre - the wharf can be seen in the map extract below. 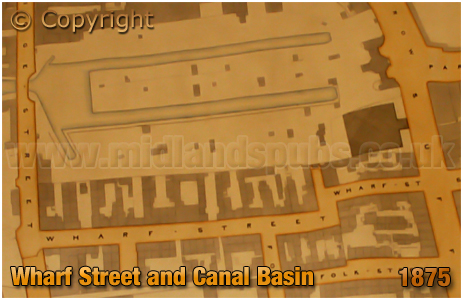 The importance of the wharf increased significantly when the Worcester and Birmingham Canal was constructed. Work at the Birmingham end of the navigation was started in 1792. It was slow progress and the canal only reached Selly Oak after three years of digging. Things would only get tougher when the long tunnel had to be dug out at Wasthills, along with an extensive flight of locks at Tardebigge. However, the waterway to Worcester was completed towards the end of 1815. It was inevitable that a thoroughfare, complete with taverns, should be laid out close to the wharf. Here you can see Wharf Street starting from Suffolk Street [directly opposite Swallow Street], following a dog-leg route to Bridge Street. 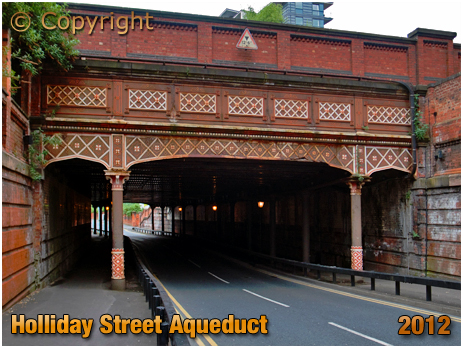 The continuation of Wharf Street necessitated an aqueduct crossing of the canal. This was completed in the mid-1860s and remains the only historic brickwork here. This impressive work may have replaced an earlier, less sturdy structure that the local authorities demanded be made safer to the public. The aqueduct is mentioned in 1868 when a robbery took place. The majority of the taverns in Wharf Street were located on the southern side but most of the buildings here were lost to the development of the Worcester Wharf Goods Station.

"Annie Sullivan, 19 years of age, a prostitute, living at a court in Moor Street, was charged with stealing a watch from the person of John Bennett Weeks, living at 106, Tennant Street. The prosecutor, a simple, unsophisticated young man, who created much merriment by the manner in which he gave his evidence, stated that on the previous Thursday night he met the prisoner in Broad Street, and after a little conversation, he went with her for a walk along the aqueduct by the Worcester Wharf. A little way along the aqueduct, the prisoner asked Weeks to put his arms around her waist, and the prosecutor being in an amorous state of mind promptly complied; but he had not enjoyed his position above a minute or two, when the prisoner made a snatch at his watch, which broke off at the bow. He tried to recover his property, but at that moment two men appeared upon the scene. They jostled him, and the prisoner got away. She was, however, pursued by a lad whom prosecutor had informed of his loss, and he came up with her in Brasshouse Passage, where she was sitting upon a door-step, with her bonnet and jacket off. He asked her to give the watch, but she denied that she had one. When the prosecutor came up, and demanded his watch, a man stepped forward and said "That's not the girl," and he pulled off his coat to fight in the prisoner's defence; but a "bobby" - as a witness called the officer - coming in sight, his valour suddenly forsook him, and he disappeared. The watch had not been found. The prisoner was committed to the Sessions."
"Robbery From The Person"
Birmingham Journal : September 19th 1868 Page 3

"Annie Sullivan, 19, penmaker, was charged with stealing a watch, from the person of John Bennett Weeks. Mr. Pigott prosecuted. On the night of the 10th September, the prosecutor fell in with prisoner in Broad Street, and at her solicitation went for a walk with her under the Aqueduct, Holliday Street. There, as he alleged, she snatched his watch from his pocket, and made off with it. She was foliowed by prosecutor, and given into custody. She denied all knowledge of the robbery, and a mao interfered on her behalf, but on seeing the police he made himself scarce. The Jury convicted the prisoner, who then pleaded guilty to a previous conviction for felony. The Court sentenced her to seven years' penal servitude."
"Fools And Their Property"
Birmingham Daily Post : October 29th 1868 Page 2

If you have a genealogy story or query regarding Wharf Street you can contact me and I will post it here in addition to including your message within the website pages for Birmingham Genealogy.

If you would like to share any further information on Wharf Street - perhaps you drank in one of the pubs in the past? Or maybe knew a previous publican running one of the boozers? Whatever the reason it would be great to hear of your stories or gossip. Simply send a message and I will post it here.

"Last week we noticed the appearance at the bar of a gun implement maker, named Bust, living in Wharf Street, on the grave charge of assaulting his wife so as to endanger her life. From the precarious state of the injured woman it was deemed advisable to adjourn the case for a few days. The prisoner was brought up today, and the policeman in charge of the case handed in this certificate. "I certify that Sarah Bust is still in a very dangerous state of health; so much so that I did not expect to see her alive this morning. J. Wilmshurst, surgeon. Workhouse, 7th December." The Magistrates ordered the prisoner to be further remanded until Monday next."
"Brutally Assaulting a Wife"
Birmingham Daily Post : December 8th 1857 Page 2

"About midnight on Saturday a fire broke out on the premises of Mr. Stephens, hay and straw dealer, Worcester Wharf. The premises consist of a large shed, with a loft running along two sides, in which the hay and straw was placed, whilst the body of the shed was occupied by the various articles of machinery used in the business. At the time the fire broke out, the premises contained three wagons, one loaded with Indian wheat, the second with hay, and the third [a perfectly new one] empty. Round the loft a large quantity of hay was stored, together with a quantity of horse beans. Mr. Stephens had also two horses in the stable; but on the first alarm they were taken out without the slightest injury. Upon the arrival of the engines a plentiful supply of water was thrown upon the burning mass, but seemingly without effect, owing to the combustible nature of the material on the premises. Two of the engines, however, drew water from the Birmingham and Worcester Canal, and threw more than a hundred gallons per minute, which was kept up for some time, a number of boatmen attracted to the spot assisting the firemen in the labour of pumping. It was four o'clock yesterday morning, however, before the fire was thoroughly extinguished and the engines withdrawn. The damage is inconsiderable when compared to what might have been anticipated from the close proximity of several large wharves; in fact, the premises of Mr. Stephens are surrounded by those of timber merchants, hoop makers, hay and straw dealers, etc. The back portion of the building adjoins a number of small tenements, the entrance to which is in Wharf Street. A number of people living in these houses removed their goods into the street, upon the fall of the roof, which sent a few blazing logs and a terrific shower of sparks upon the buildings within twenty or thirty yards. Fortunately, however, no damage has been done beyond the premises where the fire originally commenced. Both premises and stock are insured in the Birmingham. Fire Office. The reflection from the fire was visible for miles round Birmingham, and consequently large crowds of town and country people visited the spot yesterday, probably expecting that a very extensive destruction of property must have attended a fire appearing at a distance one of great magnitude. Superintendent Shepherd, and a body of police, were very active during the fire, in preventing any danger or obstruction from the pressure of the crowd."
"Alarming Fire On The Worcester Wharf"
Birmingham Daily Post : May 21st 1866 Page 7