History of the Navigation Inn on Wharf Street in Birmingham in the county of Warwickshire.

Some history of the Navigation Inn

The Navigation Inn stood on the corner of Wharf Street and Bridge Street [see map]. The pub traded at this location until it was demolished to make way for the Boatmen's Rest, a building that opened in 1885.

Bearing an inn sign that would appeal to those plying their trade on the canal or, indeed, those employed in the warehouses next to the Old Wharf and Worcester Wharf, the Navigation Tavern, as it was originally known, opened in the 1820s. Benjamin Cope was the publican in 1828. I am not sure if he is the same Benjamin Cope who would later run the Rose and Crown Inn on Moor Street.

Certainly, the development of Wharf Street was stepped up after the sale of the leasehold parcels of land during the mid-1820s. The thoroughfare was laid out on the estate of Sir Thomas Gooch, the whole of the south side of the street being auctioned off in 1825 when the properties still had 61 years left on the original lease agreements, suggesting that the earliest buildings were erected in the late 18th century.

Oliver Shaw was mine host at the Navigation Inn by 1829. There is a trade directory listing for a Oliver Shaw as a victualler in Islington Row during 1818 but it is not certain if this is the same person. He seems to have been involved in the boat trade and several auction sales of boats, plant and equipment were conducted on the premises of the Navigation Inn during his time as publican.

The Avins family were running the Navigation Tavern during the 1840s. They were timber merchants and operated a saw mill both at the Worcester Wharf and in Broad Street. Crates and barrels were manufactured by the family.

Joseph and Lucy Bennett were mine hosts of the Navigation in the early 1850s. Born at the turn of the 19th century, Joseph Bennett hailed from North Stoke in Oxfordshire. Lucy, however, was an Edgbaston woman. The family would later run the Crown Inn on Villa Street at Lozells.

William Wright took over the Navigation Inn during the mid-1850s. Born around 1796 at Margaretting in Essex, he kept the public house with his wife Sarah. She hailed from Colwich in Staffordshire, suggesting perhaps that this couple met on the canal network, her home being a short distance from Haywood Junction, where the Staffordshire and Worcestershire Canal meets the Trent and Mersey Canal.

Prior to their move to Birmingham, William and Sarah Wright had run a pub on Stoke-on-Trent's High Street. Bear in mind that the Navigation Inn was at No.36 Wharf Street - the couple's son Thomas took over a beer house called The Anchor at No.36a. Competition was tough at this end of the street for the Bull's Head was at No.37.

Following the death of William Wright the licence of the Navigation Inn was transferred to his son William in May 1875. He was born in the Staffordshire village of Wychnor, the canal connection being that the Trent and Mersey Canal passes through this place. His wife Elizabeth hailed from Leicestershire.

This item appeared in the Birmingham Mail on Wednesday October 25th 1882. It was the beginning of the end for the Navigation Inn. Within three years the public house would be pulled down and the site redeveloped with a new Boatmen's Hall. The old hall, if you could call it old, had only opened a few years earlier in 1879. It was the gift of Miss Louisa Ryland, a significant benefactor to Birmingham. She inherited the Ryland family fortune and donated land for parks and recreation, paid for the Women's Hospital in Sparkhill and contributed towards many institutions including the School of Art. 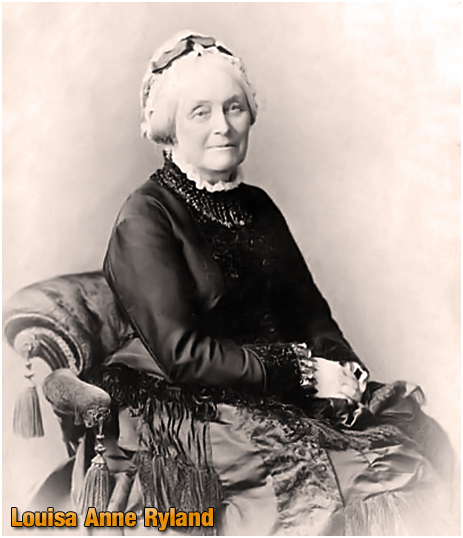 The Boatmen's Friend Society was founded at London Docks in 1846 in order to promote the spiritual, moral and religious welfare of boatmen and their families. A branch opened at Birmingham in 1863 within a converted hay-loft at Worcester Wharf. Louisa Ryland learned of this Boatmen's Bethel, as it was known, in 1877 and decided to visit the wharf to see the work for herself. It was reported that she took an interest in a blind girl on one of the boats, and had her educated at an institute in Carpenter Road. She also resolved to act as a benefactor to the boat folk and to provide them with a new building.

The Worcester Canal Company offered a site on the wharf for a new hall. It was in March 1879 that the substantial red-brick building was opened and placed at the service of the Seamen's and Boatmen's Friend Society for use as a mission. Providing instruction, recreation and refreshment, the ground floor of the three-storey building contained a large coffee room for men, with lavatory and drying room; coffee room for women, with lavatories and a kitchen. On the second floor there was a lofty hall, capable of seating up to 200 people, a vestry for bible classes and temperance meetings, and a parlour for the caretaker who had bedrooms on the third floor. Designed by the architectural firm of Messrs. Osborn and Reading, the structure cost £2,600.

The work of the temperance grew steadily and it was reported that, on average, 30 children attended the day school each day. Around 80 children attended the Sunday School. An annual report of 1879 stated that upwards of 400 cases of distress amongst boatmen in Birmingham and Wolverhampton were relieved during the frost. The report also stated that 7,214 visits had been paid to cabins of boats.

Within a few years of the opening of the mission, the site was required by the Midland Railway. The company offered compensation and a new site - the corner of Bridge Street and Wharf Street where the Navigation Inn stood. The public house was demolished and another decorative building, complete with a pointed ecclesiastical-style door and Gothic windows, went up in its place. Featuring a chapel upstairs, this building also featured a coffee room on the ground floor, along with a school in the basement. The building opened in 1885. When Louisa Ryland died four years later, a sum of money was bequeathed to the society. 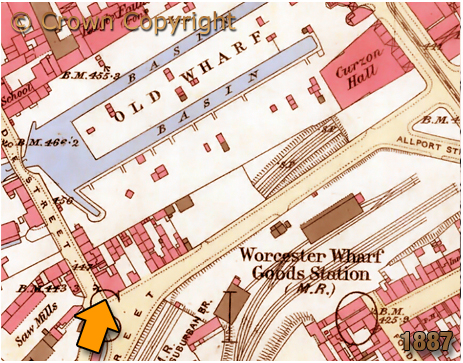 This map was drawn up a few years after the Navigation Inn had been demolished. However, the site of the pub and location of the 'new' Boatmen's Hall can clearly be seen on the corner of Wharf Street and Bridge Street. Only a few buildings that fronted Wharf Street remained after the construction of the railway, tunnel and goods station. The whole of the south side of Wharf Street was cleared. Note also the creation of Allport Street which created a triangular plot on which the offices of the Midland Railway Central Goods Station were erected. You can find photographs of the railway sidings and offices on the excellent "Photo by D. J. Norton" website. 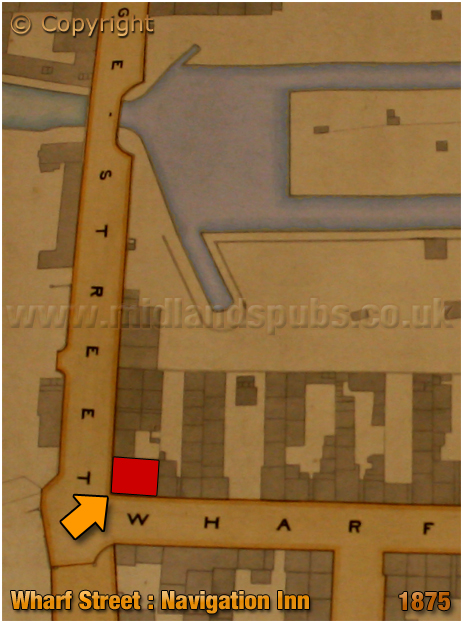 This extract from a 1875 plan of the Gooch Estate shows the location of the Navigation Inn on the corner of Wharf Street and Bridge Street. Note part of the Old Wharf to the north of the public house. The plan was already outdated when published as the line of Wharf Street was realigned to connect to Holliday Street.

If you have a genealogy story or query regarding the Navigation Inn on Wharf Street you can contact me and I will post it here in addition to including your message within the website pages for Birmingham Genealogy.

If you would like to share any further information on this pub - whatever the reason it would be great to hear of your stories. Simply send a message and I will post it here.

"On Monday last, an inquest was held at the Navigation Tavern, on the body of a man named Joseph Dunn, a crate maker. It appeared from the evidence, that the deceased had been in the habit of excessive drinking, and was so irritable in consequence, that his wife and family had been obliged to leave him. He lived in a house by himself, in Sherbourne's buildings, Worcester Wharf, where he was found dead on Saturday morning, sitting on his side, with his handkerchief tied round his neck fastened to the bed post."
"Suicides"
Birmingham Journal : January 18th 1840 Page 5

"At nine o'clock on Wednesday night, Robert Beard, a fine young man of twenty, arrived in Birmingham with his boat from Gloucester. He was accompanied by the captain, a man named Parrott. On reaching town Parrott went to a public house, leaving Beard lying on a seat in the cabin. Upon returning at midnight he found him lying on the floor quite dead. He had apparently fallen off the seat, his temple was slightly contused, but was perfectly sober and apparently well going to sleep. An inquest on the body was held yesterday at the Navigation Inn, Wharf Street, when it seemed that the deceased was subject to fits. He was on good terms with the men in the boat. The evidence of Mr. Bull, surgeon, who examined the body, went to show that nearly every organ was highly congested; the lungs and brain especially. The stomach was enormously distended by large undigested lumps of food. In his [Mr. Bull's] opinion, the deceased had been taken sick and had fallen head foremost in rising for the purpose of vomiting. He was convinced that death had resulted from congestion of the brain. No blame was supposed to attach to any party. The Jury returned a verdict in accordance with the medical evidence."
"Sudden Death Of A Boatman"
Birmingham Journal : March 8th 1856 Page 7