History of the Prince of Wales in Wharf Street in Birmingham in the county of Warwickshire.

Some history of the Prince of Wales

The Prince of Wales was located at No.31 Wharf Street, on the northern side of the thoroughfare, a few doors away from the Navigation Inn on the corner of Bridge Street. With its own brewery to the rear, the Prince of Wales was a homebrew house. The beer house was later known as the Queen's Arms.

Charles Baylis was probably responsible for obtaining a beer house licence for the property. He was recorded as a shopkeeper at No.31 Wharf Street in 1845 but in the following year he is listed in Wrightson and Webb's trade directory as a beer retailer. It remained a combined business with Charles Baylis, principally a shopkeeper, flogging some beer to the boat folk concentrated around the wharf.

By 1851 John and Ann Smith were running the beer house. The couple both hailed from Nottingham. During the day John Smith worked as a whip thong maker, a business that may have been operated in the court behind the pub as his daughter Beatrice and son George were also engaged in this field. I am not sure what happened to this family, except that a decade later John Smith was living alone in Caroline Street where he continued to work as a whip thong maker.

Catherine Riley was the licensee by 1855 and she remained at the helm for much of the decade until the Taylor family took over the business. John Taylor was a hay and straw dealer, suggesting a close relationship with the canal trade. He was born in Alvechurch in 1812 but moved, along with his family, to Birmingham to work as a labourer on the wharf. The family initially a few doors away next door to the Navigation Inn. 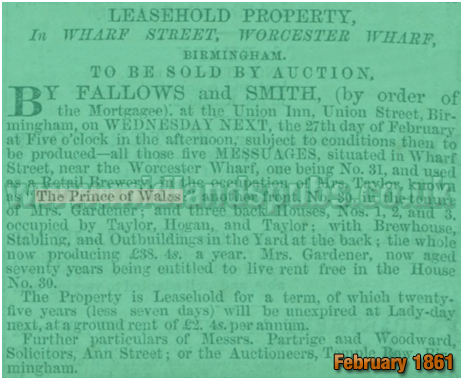 The Taylor family, like most of the folks living in Wharf Street, rented the property. Bundled together, the leasehold properties consisting of Nos.30 and 31, along with the rear court, were sold by auction in February 1864. The advertisement for the auction indicates that Elizabeth Taylor was operating both the Prince of Wales and a brewery to the rear of the beer house. Two of the back houses were being used by the Taylor family, the other being occupied by the salt hawker Patrick Hagan, along with his wife Ann and daughter Alice. There was no income to be had from No.30 for the prospective buyer because Emma Gardener, a retired provision dealer, was entitled to live rent free in her house next to the Prince of Wales.

The Taylor family moved on and from the sale notice below it is possible to get a slight impression of the brewery that operated behind the beer house. The sale came about as a result of the death of Thomas Clarke who I assume was the purchaser of the leasehold properties in 1861. The other key change was the change in trading name from the Prince of Wales to the Queen's Arms. Prince Albert of Saxe-Coburg and Gotha died in December 1861 and was buried at Saint George's Chapel at Windsor Castle. Keeping things current, the proprietor's of the house changed the name to honour his wife, Queen Victoria. 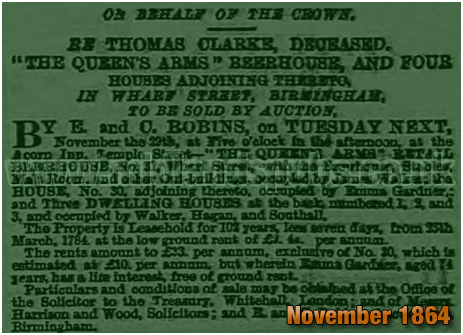 The auction that included the Queen's Arms also detailed a stables, malt room and other associated out-buildings occupied by James Walker. He is recorded as a beer retailer at this time within Jones's Mercantile Directory. By 1871, however, Thomas Wright was the licensee of the Queen's Arms.

More information on the Prince of Wales in Wharf Street to follow...... 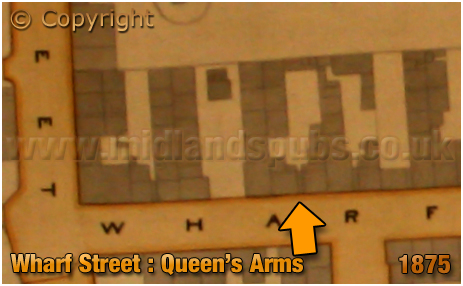 This extract from a 1875 plan of the Gooch Estate shows the location of the Queen's Arms in Wharf Street. The pub was at the front of a small court, in which one of the buildings contained the old Prince of Wales brewery, the former name of the tavern.

If you have a genealogy story or query regarding the Prince of Wales or Queen's Arms in Wharf Street you can contact me and I will post it here in addition to including your message within the website pages for Birmingham Genealogy.

If you would like to share any further information on this pub - whatever the reason it would be great to hear of your stories. Simply send a message and I will post it here.

"At the Public Office, yesterday, before Mr. T. Cox, Moses and Sarah Callow were brought up on remand, charged with maliciously stabbing and wounding John Thomas Martin, a neighbour, residing in Wharf Street, on Christmas Day, under circumstances already detailed in the Post. It will be remembered that the prisoners were taken before the Magistrates on the Tuesday following Christmas Day, but remanded for the attendance of the complainant, who was lying dangerously i11 at the Queen's Hospital. They were again taken before the Magistrates, and further remanded till yesterday, on account of the complainant still being unable to attend. He managed, however, with great difficulty, to attend yesterday, and the case was proceeded with. The following evidence was given: John Thomas Martin stated that he lived 15 Court, 2 House, Wharf Street; the two prisoners also resided in the same street. On Christmas Day, in the afternoon, he, in company with another man, went with the prisoners to the Prince of Wales beer house, in Wharf Street. After being there some time they adjourned to the prisoners' house, where they continued drinking until most of them were in a state of intoxication. Shortly afterwards Callow and his wife quarrelled, and the female prisoner called out, "Look out, he's got a knife." Martin stated that he then went towards Callow, but had no further recollection of what had occurred till on going out of the house he discovered that he was stabbed. He went back into the house, and saw White holding Callow by the shoulders. Martin told him that he was stabbed. Martin then went home, and from thence to the Queen's Hospital. Mr. Jones, surgeon at the hospital, stated that he examined Martin on his admission, and found that he had been stabbed several times in the abdomen, apparently by some sharp-pointed instrument. The wounds were of an exceedingly serious nature, but the only danger to be feared at the time was inflammation. The man White, was asleep in the room at the time of the occurrence, said that before they left the Prince of Wales beer house, he had seen the female prisoner cutting some tobacco with a long-bladed knife, which could not afterwards be found. Police Constable Patrick McCormack stated that he was on duty in Paradise Street, about half past six on the day mentioned, when he was apprised of the occurrence by the mother the complainant. He went to Wharf Street, and apprehended the male prisoner at the beer house where they had previously been drinking. The officer then went the prisoner's house, where he searched in vain for the knife. He however saw a quantity of blood in the room, and also some outside the house. He told the prisoner he would be changed with stabbing the complainant, but the prisoner persisted in asserting his innocence, and said if the officer took him he would take the wrong man, and if he was to be hung he should die innocent. The officer afterwards visited Martin at the hospital, and found him partially insensible. In consequence of his statement, the officer took the female prisoner into custody the following Tuesday. There was no evidence against her now, as the complainant stated that it must have been the male, and not the female prisoner, who struck him, he was not near her. She was therefore released from the dock. On being asked what he had to say in answer to the charge, the male prisoner said he was drunk at the time, and had no recollection whatever of what took place. He was committed to take his trial at the ensuing Quarter Sessions."
"The Wharf Street Stabbing Case"
Birmingham Daily Post : January 4th 1865 Page 3