History of the Rose Tavern on William Edward Street in Birmingham in the county of Warwickshire.

Some history of the Rose Tavern

The address of the Rose Tavern was No.43 William Edward Street. Despite some tinkering with the street numbering, the beer house had this number from the 1860s until its closure. However, something very odd occurs in the trade directories in that it was originally listed on the eastern side of the street but, in later years, it was included on the western listings. I do not think the licence was moved across the road. I have seen cases of this in other streets of Birmingham but I do not think it happened here. What is really bizarre in the trade directory listings for William Edward Street is the fact that the Vaughton Works of James Tombs is listed on the west side of the street when mapping clearly shows it is on the eastern side and extended in a dog-leg fashion to another frontage on Dymoke Street. All very odd.

It is worth mentioning the Vaughton Works as the people who toiled in this factory no doubt enjoyed a few drinks in the Rose Tavern. The manufactory, along with the beer house were featured in early trade directory listings for this street. In 1868 only ten traders are listed in the thoroughfare : the greengrocer Francis Constant, a rule manufacturer named Charles Inman, John Trevis worked as a fire-iron maker, the building yard of Rudge & Hartley, a haberdashery run by Matilda Morrell, the baker Edward Bridger, and two general shops run by Arthur Rudge and Mary Warner respectively. Along with Reuben Beddows at the Rose Tavern and James Tombs making bedsteads, these people made up the commercial element of William Edward Street.

The Vaughton Works expanded as the business of James Tombs prospered. Born around 1838 at Hanley Castle in Worcestershire, he came from humble beginnings but moved to Birmingham as a young man to improve his lot. He had worked as a pot boy in the Unicorn Inn at Great Malvern before heading to the town of industry. When he married Ellen Bidder at Yardley in 1856 he was working as a packer. He may have had received a leg-up from this family for she was the daughter of the confectioner David Bidder. James Tombs certainly would have benefited from some financial help as his business was up-and-running within a few years. 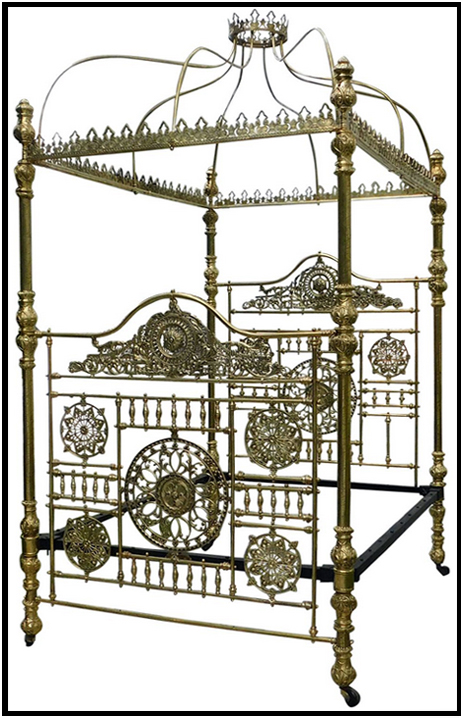 This is one of the more expensive bedsteads manufactured at the Vaughton Works operated by James Tombs. In 2020 this restored Victorian all-brass crown and canopy four-poster frame and bedstead was retailing at £32,000. The elaborate frame was made for the export market and the manufacturer's nameplate was still on the front cross-iron bearing the name of "James Tombs Manufacturer, Vaughton Works, Birmingham." Not all of the bedsteads made by James Tombs were this ornate but it demonsrates the level of craftsmanship of those employed at the Vaughton Works.

Demand for the bedsteads manufactured by James Tombs seems to have been good from the start. By 1865 he was advertising and offering 'liberal' wages for further skilled labourers, including smiths, painters, lacquerers and ornamental japanners. Sales seemingly went through the roof and by 1871 he was employing 36 men, 12 women and 12 boys. His sudden wealth meant that he and his wife Ellen could afford a house on Moseley Road. The upward trend continued and he moved to leafy Edgbaston.

In May 1877 James Tombs was badly wounded in an accident when his horse was frightened on Alexandra Road. The horse was spooked by somebody beating a carpet and the animal bolted, throwing the bedstead manufacturer. He managed to hang on to the reins but received wounds to the scalp and face from one of the animal's hoofs.

James Tombs could, by the sound of it, be a bad-tempered man. He was once charged and fined for assaulting his father-in-law who had disturbed him during his dinner. He threw a bottle of claret at David Bidder before forcibly ejecting him from his house, breaking three of his ribs. 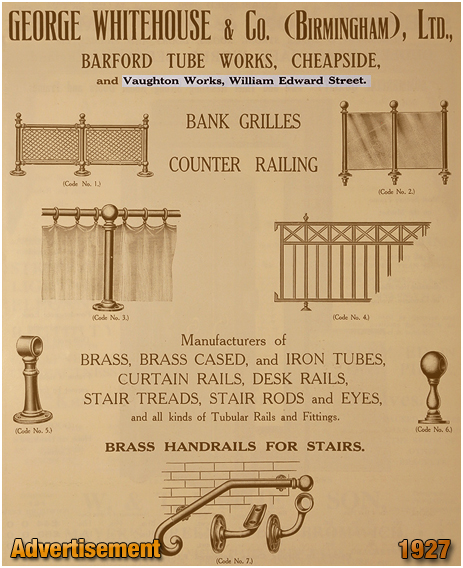 Ellen Tombs died at a relatively early age and her husband, who had retired from the business, married his domestic servant and moved to Malvern Wells. When he died in November 1903 part of his effects went to the tube manufacturer John Earle. As it happened, the Vaughton Works became a tube works, an extension of the Barford Tube Works at Cheapside operated by George Whitehouse & Co.

Winding the clock back to the period when James Tombs was establishing his business, the Rose Tavern was being run by Reuben and Eliza Beddows. Born in Birmingham in 1830, Reuben Beddows was the son of a bricklayer and grew up in Lancaster Street. In his early career he worked as a japanner. In July 1854 he married Eliza Slater at Aston. She was the daughter of the shoemaker John Slater. In 1861 Reuben and Eliza Beddows were living in Park Street where he was recorded as a provision dealer.

The census returns place the Rose Tavern, sometimes known as the Rose Inn, between Courts 3 and 4, meaning that the beer house was opposite the Vaughton Works of James Tombs - and yet trade directories list the building on the east side of the street. This makes me wonder if the directories perpetuated an error first made in the 1870s?

Reuben Beddows died on February 28th 1886 and Eliza went to lodge with the Heath family at Adderley Road in Saltley. The Gloucestershire-born cabinet-maker Oliver Pinfield kept the Rose Tavern for a short spell. As an employer, he was forced to concede to the demands of his workers who had gone on strike in 1890. He moved a few doors away when George Homer took over the licence of the Rose Tavern.

In the early 1890s the Rose Tavern was being run by Arthur and Eliza Cox. They were managers for the Sykes Brewery Company Ltd., a firm based at Union Street in Burton-on-Trent. The business was short-lived and the brewery was leased by Everard's by the end of the Victorian era. Arthur and Eliza Cox got into a dispute with the brewery and took flight with the licence of the Rose Tavern in 1892 [see newspaper article], following which Sykes Brewery Company had to apply for a new licence for the house. Arthur Cox left the licensed trade and worked as a tool maker in the screw trade. He and his family lived in York Road at King's Heath.

A rate book compiled in 1901 shows that the Rose Tavern had been acquired by Mitchell's and Butler's. In addition to the beer house, the premises included a bottling stores with machinery. I believe that this was used for producing bottled mineral water.

At the end of the Edwardian period the Rose Tavern was kept by Elizabeth Price. Born at Stoke Bliss on the border of Worcestershire and Herefordshire, she had previously traded as a coal dealer in Heath Street.

"Samuel Waltnew, 44, greengrocer, residing at 2, Darwin Street, was charged with attempting to commit an indecent assault upon a little girl, 10 years of age, named Sarah Chatley. The prosecutrix was engaged at the Rose Tavern, William Edward Street. Yesterday the prisoner went there for some refreshment. After staying there some time he saw the prosecutrix go into the stable. He followed her and attempted to commit the offence with which he was charged. The prisoner was sent to gaol for two months. Directly the sentence was passed the wife of the prisoner rushed before the dock, crying bitterly, and begging the Stipendiary not to convict the prisoner, saying she should become a beggar if he was. Mr. Kynnersley said he was very sorry, but he could no otherwise."
"Attempt To Commit An Indecent Assault"
Birmingham Daily Gazette : July 28th 1865 Page 3

"Mr. J. Moore Bayley made an application on behalf of the Sykes Brewery Company [Limited], under somewhat peculiar circumstances. He informed the Court that the company had as the manager of the Rose Tavern, William Edward Street, a man named Arthur Edward Cox. A fortnight ago Cox informed the company that it was his intention to leave the house. He left the house, and took with him the license. An application was immediately made to the Bench for power to compel Cox to give the licence up, but the magistrates thought the better course would be to give Cox due notice to return the licence, or give the reason why he detained it. Cox had not done either, and all efforts to trace his whereabouts during the last week had failed. He [Mr. Bayley] now asked the Court to grant the company power to continue the business of the house under Section 41 of the Licensing Act of 1872. Mr. Barradale [magistrates' clerk] stated that when the case was before the Court a week ago it was admitted that Cox had some claim on the company, and that he retained the licence as security. Mr. Bayley said that instead of the company being indebted to Cox he was in their debt to the extent of £156. The Bench granted the application."
"Licensing Application"
Birmingham Daily Post : November 4th 1892 Page 3

If you have a genealogy story or query regarding the Rose Tavern on William Edward Street you can contact me and I will post it here in addition to including your message within the website pages for Birmingham Genealogy.