History of the Warstock Inn at Yardley Wood in Birmingham in the county of Warwickshire.

Some history of the Warstock Inn

Rebuilt by Ansell's Brewery Ltd during the inter-war years but demolished for the redevelopment of the site in the 21st century, the Warstock Inn stood on the edge of the parish. Indeed the name Warstock, first recorded as Le Harstock, is thought to derive from an Old English term for a boundary marker, possibly a stone but maybe a post. 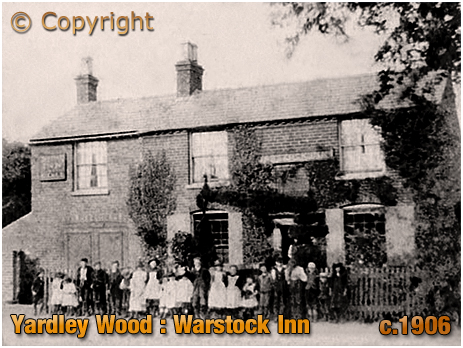 The pasture land around the Worcestershire hamlet of Warstock straddled the neighbouring parishes of King's Norton and Solihull, the latter being in the county of Warwickshire. A 14th century revolt against Roger Mortimer, Earl of March, maintained a tradition of this pasture land being communal. Warstock was not enclosed until the early 19th century.

If the old tavern that stood here had not been replaced they would probably be slapping some sort of preservation order on the building and patrons calling at the inn would be able to bask in the character of old Yardley and try to picture the area with leafy lanes crossing shallow waterways. This would all change when the first major development of the Daisy Farm Estate was laid out and initiated after World War One. More housing development would follow with the subsequent loss of the surrounding rural charm. 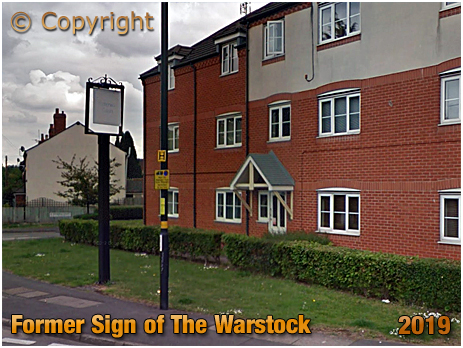 The old inn sign has been left as a reminder of the pub which stood on an old junction which we recognise today as Yardley Wood Road and Prince of Wales Lane. The south-easterly section of Yardley Wood Road from the Warstock Inn to the High Street retained its name of Stoney Lane into the 20th century. As the name suggests, this road was built on suitable land amid the marshy landscape. Stoney Lane continued northwards across Billesley Common and on towards Showell Green - just the sort of route for a small wayside inn. 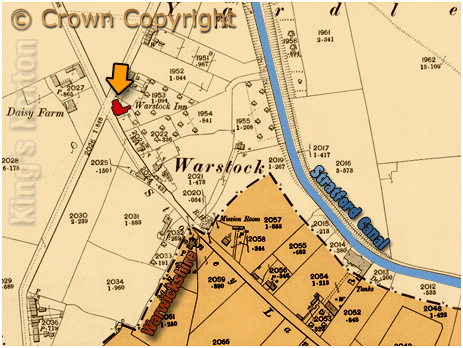 This map shows the close proximity of the county border to the Warstock Inn, along with the boundary with King's Norton. Built between 1793 and 1816, the Stratford-upon-Avon Canal passed quite close to the Warstock Inn but the lack of a footpath between the tavern and the waterway suggests that no attempt was made to profit from any potential boat trade. Designed by Josiah Clowes, and continued after his death by Samuel Porter and William Whitmore, the canal originates from the King's Norton Junction of the Worcester & Birmingham Canal and passes through 56 locks on its way to Stratford-on-Avon. Following the valleys of Chinn Brook and the River Cole, the section close to the Warstock Inn was opened in 1796.

Samuel Dedicoat was publican of the Warstock Inn during the early 1850s. There are records of Dedicoat[e]'s living at Yardley Wood during the 18th century but Samuel hailed from Tanworth-in-Arden. He is mentioned as an owner of land in the inclosures of 1844. The former farmer was recorded as a grocer and retail brewer so it would seem almost certain that the Warstock Inn sold homebrewed ales.

Samuel Dedicoat died on December 27th, 1862. His wife Ann succeeded him as licensee before concentrating on the grocery business. The commercial activity at the Warstock Inn changed when the whitesmith George Sale became the publican. He combined his metal trade with running the Warstock Inn along with his wife Eliza. The couple were both Yardley born-and-bred and had lived close to the tavern for many years.

The years of hard work caught up with George Sale and he passed away in May 1887, leaving the pub to his wife Eliza. She continued to run the Warstock Inn with her daughters Eliza and Rosina. The brewer Henry Sale lived close to the pub and was possibly responsible for the ales sold at the house. The old grocery shop once run by Ann Dedicoat was now being kept by Ann Tuby who was also a chocolate maker. Her son Arthur was a baker. Cakes, chocolate and beer - a heady mix of calories in this part of Warstock!

Eliza Sale died on the last day of October in 1892, leaving a small estate to her daughters Eliza and Rosina. Two spinsters running a pub was probably akin to bees around a honey pot at Warstock. However, soon afterwards James and Eliza Smith were running the establishment. This was a different Eliza as she had married the son of a local blacksmith in 1894. The couple had three children living at what was now called the Warstock Hotel. This was, however, a branch of the old family as their eldest son's middle name was Sale.

James Smith would remain at the helm for many years. In the early Edwardian period he applied for a Sunday licence for the Warstock Hotel as he wanted to capitalise on the increase in trade from day-trippers, particularly those combining an excursion to the nearby Happy Valley at Chinn Brook. 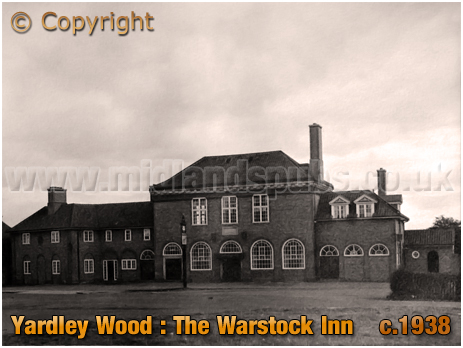 This photograph of the Warstock Inn was taken during the 1930s, not too long after it was rebuilt by Ansell's Brewery Ltd. Running the place in this period was Albert and Dorothy Smedley, a couple who moved to the Stonehouse Inn on Stonehouse Lane. Albert, who had served in the military during the First World War, did not witness WW2 as he died in October 1939.

The 'new' Warstock Hotel was ambitious in scale even with hundreds of homes being constructed nearby. The gardens featured a bowling green and the pub had a regular team playing in the local league. A pigeon-racing club also met at The Warstock.

The Warstock had a large organ as an attraction in the 1960s. Harry Miller was the man who tickled the keys.

The Warstock faced another large building which has the appearance of a former public-house but was in fact a shopping development for the housing estate. One of the four retail units was a sweet and tobacconist's shop run as a partnership with Arthur and Jean Currier owning half of the business. The adjoining shop was once a bakery shop called Trevor's. Norman Avery also operated a butcher's shop here and the fourth unit was a greengrocery store.

If you have a genealogy story or query regarding the Warstock Inn at Yardley Wood you can contact me and I will post it here in addition to including your message within the website pages for Birmingham Genealogy.

"Ernest Haynes [18] who lived at 129 Stoney Lane, Sparkhill, has been found drowned in the canal, near Yardley Wood. He left home last Thursday, saying that he was going for a walk. He failed to return, however, and Inspector Griffin. of the Sparkhill Police, was informed, and caused descriptions of deceased to be distributed around the district. Nothing was heard of him, and learning that he had been in the habit of going boating on the canal at Yardley Wood during the summer, the inspector decided to have the canal dragged, and on Sunday deceased's body was recovered from the water by Police Constable Gray and the foreman of the canal, and was removed to the Warstock Inn, Yardley Wood, where an inquest will be held today. It is not known how deceased got into the water, but it is stated that some time since he received a serious injury to his head, and since then had been somewhat strange in his manner.
"Found Drowned at Yardley Wood"
Birmingham Daily Post : January 2nd 1900 Page 5

"A threatening letter written by a young man to his employer led to the appearance of the former at Birmingham Police Court today on a summons for being a disturber of the peace. Defendant Benjamin Halsey [aged 18], a tall, muscular youth, of Warstock Road, who had been employed as a grinder at the works of Mr. Alfred Cleaver, Weyman Street. Mr. M. P. Pugh, who prosecuted, said Halsey had earned an average weekly wage of £4 15s. During his employment he refused to do fire-watching duties and was fined. He had dropped and damaged a micrometer and subsequently he offered a week's notice. Instructions were given to him to fill in a form for his release. He did so, giving as his reason that £1 2s. 6d. had been stopped from his wages. As a result a communication was received from the Employment Exchange, and Mr. Cleaver sent Halsey £1 17s. 6d. 15s. pay for March 20 and 22s. 6d. which had been wrongly deducted. On April 13th, said Mr. Pugh, Mr. Cleaver received a letter from Halsey in which he said: "Cleaver, you have every reason to be ashamed of yourself and will be before I have finished with you ... You are a rotten mongrel and I hope you get blown off the face of the earth in the next air raid ... I was fined three guineas this week for not fire-watching at your rotten hole, where you supply a dirty, verminous bed for the men whom you treat as slaves. You must pay the fine this week, as you are the one to blame. If you don't, I will kill you." Witnesses spoke of Halsey's fighting attitude. The foreman said Halsey had threatened to kill him. Halsey, invited to give his explanation, said, he had no statement and nothing to say. The Stipendiary: "You had better keep a watch on yourself or you will get yourself into very serious trouble. You must find two sureties in £10. and yourself in £20, to be of good behaviour, and if you don't find them you will have to go to prison for three months." The Clerk: "Have you got the sureties?" "I am not going to try." Halsey was then taken into the dock and down the steps leading to the cells."
"Threats to Employer"
Birmingham Mail : May 14th 1942 Page 3