History of the Yardley Arms on Yardley Fields Road in Stechford at Yardley in Birmingham in the county of Warwickshire.

Some history of the Yardley Arms 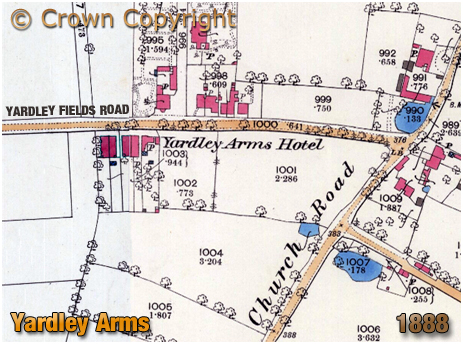 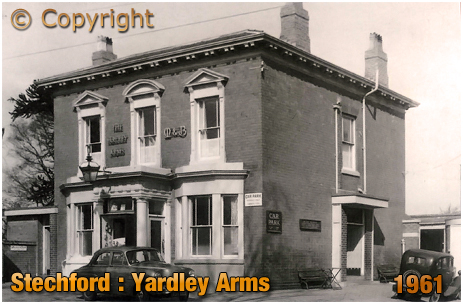 If you have a genealogy story or query regarding the Yardley Arms on Yardley Fields Road in Stechford at Yardley you can contact me and I will post it here in addition to including your message within the website pages for Birmingham Genealogy.

"Alfred Roberts, Watery Lane, Birmingham; Frederick Yorke, 28, Warner Street, Birmingham; and Arthur Gibbons, 2, back of 23, Allcock Street, Birmingham, were charged at Acock's Green Police Court yesterday with breaking and entering the Yardley Arms Hotel, on March 21st, and stealing articles of the value of £40. Roberts and Gibbons pleaded guilty, but asserted that Yorke was innocent. Yorke was discharged, and the other two prisoners were committed to the Worcester Sessions. Joseph Vincent Jones, licensee of the Yardley Arms Hotel, said on March 21st he locked up as usual at ten o'clock. During the night witness and his wife heard noises. When witness got out of bed for the third time to see what was the matter, he saw Gibbons on the landing coming towards the bedroom door and about to enter. Witness went for him, but the man ran downstairs and got away. He then found that the place had been thoroughly ransacked. In the bar two windows were open, and also the side door. The articles missing included a gun, grandfather clock face and works, bottles of brandy and port wine, silver spoons, metal cups, cigarettes and tobacco, a quantity of electro-plate goods, boots and other articles. Witness afterwards found some of them in an adjoining field, and some on the bowling green at the rear of the house, where a jemmy was also found. On March 26th he identified Gibbons among a number of other men as the one he saw at his bedroom door. The total value of the stolen property was about £40 Inspector Milsom, after being informed of the affair, made a search, and in the adjoining field he found a bicycle hidden amongst some cabbages and a number of articles under the soil. He removed the bicycle, but left the other things with Sergeant Brunton in charge. At eight p.m. the same day Roberts and Gibbons were brought to Hay Mills Police Station and detained, and the next day Yorke was brought in to join them. In reply to the charge Roberts said: "I know nothing about it." Gibbons said: "I am perfectly innocent," whilst Yorke said nothing. In the cells, however, Roberts said he would tell witness all about it. Prisoner was warned, but made a statement and signed it, and said he wished Gibbons to know what he had done. Witness told Gibbons, who said, "What Roberts has said is nothing to do with me. If he has done the job let him go through it. We went on the field at Robert's suggestion. Yorke is innocent. That stuff was pointed out to us when we got on the field by Roberts. Yesterday morning Roberts and Gibbons both said, "We shall plead guilty, but Yorke is innocent." Police Sergeant Brunton spoke to arresting Yorke, who pleaded innocence. Police Constable Oakey, who was set to watch the articles in the field, described how Roberts came on the scene and was joined by Gibbons. Roberts went towards where the stolen property was hidden and started turning up the soil. Eventually, with the assistance of Police Constable Gall [Stechford] the two were arrested. On the way to the station Gibbons said, "I thought we should have been had the same morning. When we got into the Yardley Arms I drank a bottle of port wine and it made me bad. I went to sleep for an hour while Roberts took a clock to pieces. He woke me up and I went upstairs, where I met Jones, the landlord. I did not stop to walk down - I tumbled." Gibbons and Roberts now said Yorke was innocent and that it was a shame he should be kept in prison. Yorke called a witness to prove an alibi that he was in bed at the time of the burglary."
"Yardley Hotel Robbery"
Birmingham Daily Gazette : April 1st 1910 Page 4