Blog for June 2015 with Photographs, Travel Notes and Local History

We hooked up with a few friends today to ride the "Over The Hills" audax. Starting and finishing at Tewkesbury, this was a most pleasant 110km cycle ride around the Vale of Evesham and Malvern Hills. The event was organised by Mark Rigby, who is noted for his "West Coast, Highlands and Inner Hebrides" cycling marathon featured on television. I think he organises the "Over The Hills" audax every June so this short blog item featuring just a few highlights may encourage you to sign-up for a future cycle ride. 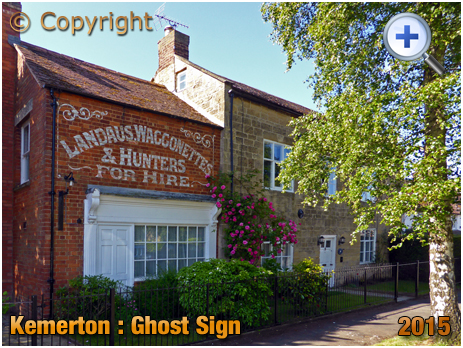 The start and finish was at Wetherspoon's so in order not to dampen everyone's spirits, I had to keep schtum and not launch into a vitriolic diatribe regarding Tim Martin's vision of the British pub. On the plus side, the building has plenty of history and was used by Charles Dickens as a location for his "Pickwick Papers."

The audax route started off by passing through some picturesque villages on the Gloucestershire and Worcestershire border. Our group were only rolling along at around 21kph so I was able to stop and take photographs and catch them up again. The above ghost sign caught my eye in Kemerton, a lovely reminder of a former business that gave way to a motor garage. The property is now a private house. Named after the German city where they were first produced, landaus are elegant carriages in which passengers face one another across a centrally-positioned foot well - the sort of vehicle still used for ceremonial occasions by the likes of the Lord Mayor of London. 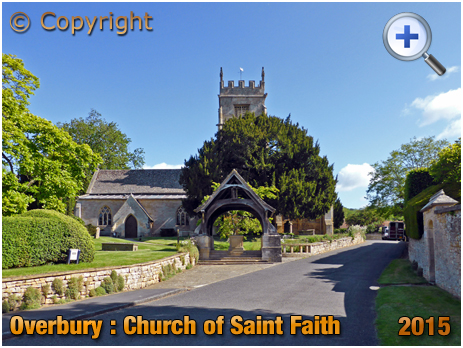 A short distance further along the route saw us enter the pretty village of Overbury and past the parish church of St. Faith that dates from the 12th century, though erected on an existing church site. The building was modified in the 13th and 15th centuries and completely restored in 1879-80 by Richard Norman Shaw for Robert Martin, member of the banking family. 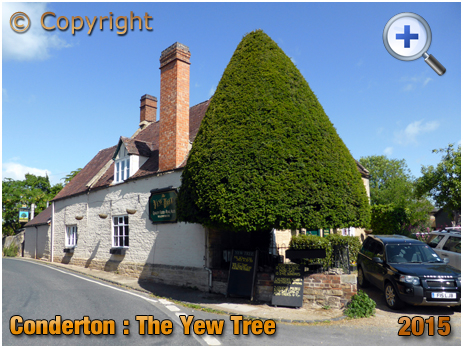 The Yew Tree at Conderton is part of the Overbury Estate and a very popular public-house. The Yew Tree itself is a lovely specimen. Operated by Wadworth's, the gentrified hostelry has a less salubrious past. When the licence of the old beer house was being transferred in the 1880s the Yew Tree had quite a bad reputation and many local residents opposed the granting of a licence. It was a tadge early for us to call into the establishment but I believe it was still being run by Dale Allison who had scooped the Retailer of the Year and Tenant of the Year gongs at the annual Wadworth awards ceremony a few years earlier. 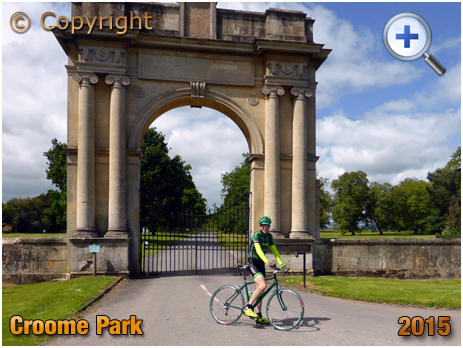 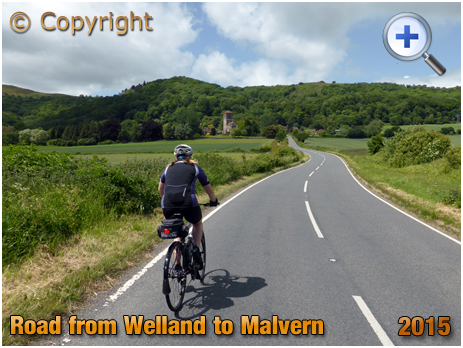 The audax skirts around Croome Park before heading through Welland towards the Malvern Hills. Croome Park is normally a good pit-stop but today lunch was up on the hill so we just stopped for a quick photo before heading along the flatlands. I will talk about Croome Park in detail on another blog post. In the meantime there is a bit of uphill to negotiate. Actually, the ascent from Welland is fairly easy and, as you can see, the road is fabulous. 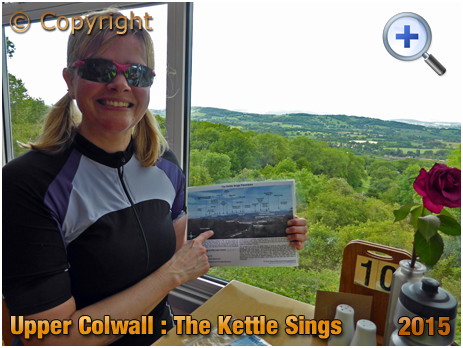 Lunch was enjoyed at the Kettle Sings at Upper Colwall. First opened in 1928, this place seems to get mixed reviews but our lunch was good and we had a great seat that provided panoramic views of Herefordshire. Each table has a laminated guide to the view and it is easy to pick out Marcle Hill, Hay Bluff and the Black Mountains in the distance. 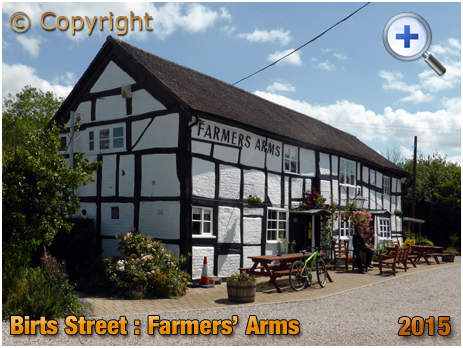 Fully fortified we rolled off the Malvern Hills and across Castlemorton Common, a particularly lovely part of the world and seemingly unspoilt. The route passes the ever-so-wondeful Farmers' Arms at Birts Street which demands your patronage. A tremendous old pub. Crossing the county boundary into Gloucestershire we became embroiled with another friendly group of women cycling at the same pace. We met lots of nice folks on the ride. The scene outside the parish church at Forthampton is particularly charming. We were heading to the river and a quick stop at the Lower Lode Inn, a pub thought to date from the 16th century. 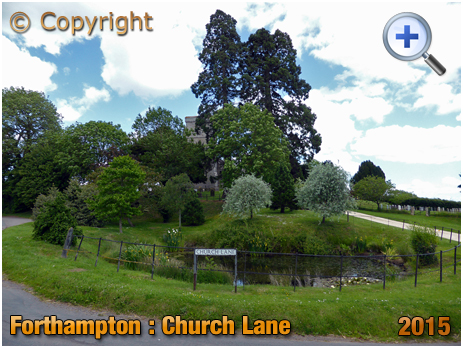 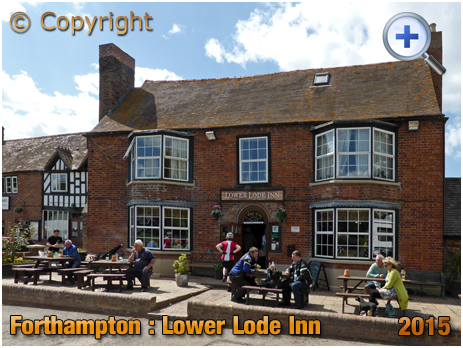 The choice of beer in the Lower Lode Inn was good - Great Western Brewing Company Meerkat Mild had been delivered from Bristol, Malvern Hills Black Pear had been rolled down the hill, there was a rich chocolately mild in the form of Monument Ale by Severn Vale Brewing Company, and from upstream there was the Bewdley Brewery Worcestershire Way. With all this locally-produced beer, you can forgive the presence of Doom Bar, probably some sort of cellar maintenance agreement with Coors. 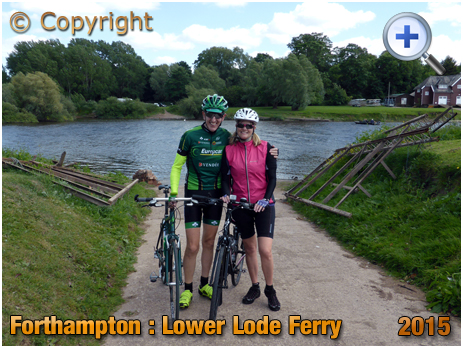 The pub enjoys a fabulous location. The ferry is thought to have belonged to Tewkesbury Abbey and operating in the 14th century. After the reformation, the ferry was in the ownership of Forthampton Court. The Mythe Bridge diverted traffic away from the site but the ferry service survived until the barge sank around 1920. However, a ferry for foot traffic crossed the river for some years afterwards. 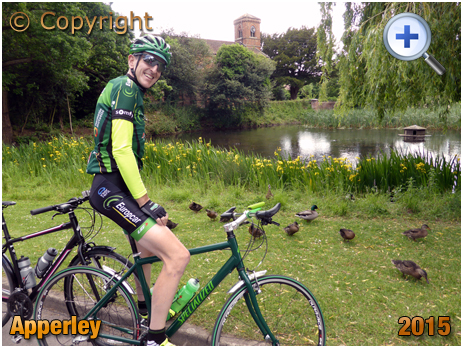 After cycling past St. John the Baptist at Chaceley, we crossed the river at Tirsley close to the Haw Bridge Inn. The route then passed through the quiet village of Apperley where there is a great duck-feeding opportunity. And so it was time to head northwards back to Tewkesbury where the Hop Pole was serving Bard, a 4.6% beer from the Cotswold Spring Brewing Company, a brewery founded in 2005 by John Worlock and Warren Bryant. This beer was billed as a " quixotically crisp, dry and nutty ale, with a poetic fruitiness." On this evidence, William would have enjoyed this fine tipple. The Bard was a fine end to a grand day out. 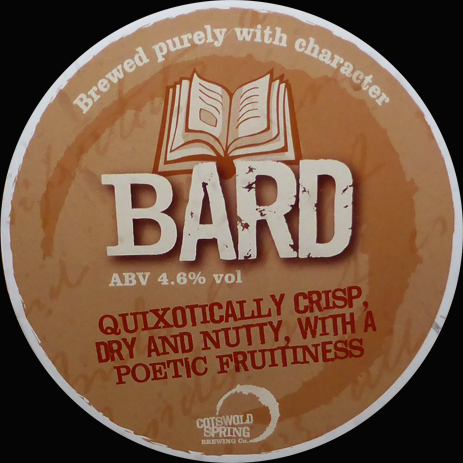 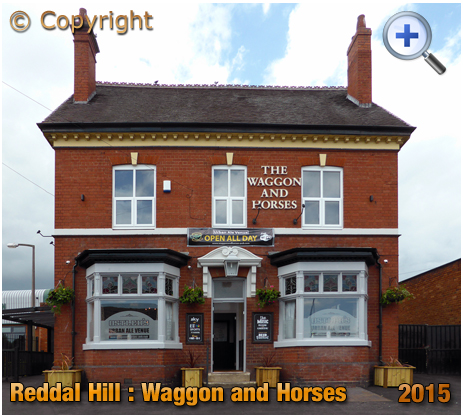 We tried out the new-look Waggon and Horses at Reddal Hill on Thursday evening. The pub is also now known as Ostler's Urban Ale Venue and, I am told, it is the second outlet of the guys running the White Horse at Harborne and where they occasionally brew their own ale. Do we like the refurbishment? Er, no. Two reasons : I am an old fuddy-duddy and like pubs to be traditional. Secondly, I have fond memories of the old place as I grew up a few doors away from this hostelry. Gone are the old bar and lounge, ditched in favour of one large room. It is a bit like a sports bar with lots of televisions. We struggled to conduct a conversation because of the volume of the music. This was turned down later and much appreciated. A bit like Brum's Welly, the beers are on a monitor screen. There were two beers from Kite, the first was like vinegar and returned promptly. In their defence the pump clip was turned around. The other beer was very good, a nicely balanced ale served very well. So all was not negative and it is good to see the pub trading rather than going the way of others in the town.

"I must try it out. I too grew up only a few doors away and never liked the place. I used the Bridge Inn on the corner of Newtown Street, Rose and Crown at the top of Brook Lane and the Gate Hangs Well, all and many more now gone. We should be glad that modernisation is keeping those that are left open for future generations. Old I may be, fuddy-duddy I am not."
Trevor Rafe

It seems as though there are zillions of different takes on the "Downfall" bunker scene. Some are good but this one takes the biscuit. Easily the best version I have seen of this film clip - it made me cry with laughter .... 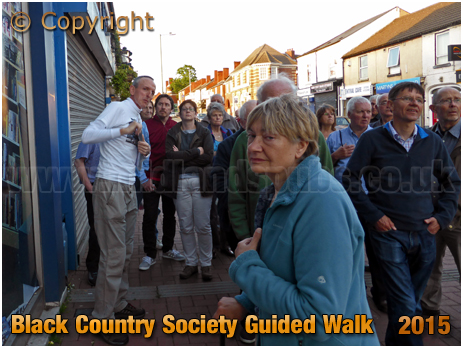 Proof that I am not always in cycling kit! Last night I led members of the Black Country Society on a walking tour of Cradley Heath. Apart from the woman at the front of this shot, I seem to have everyone going "cor, look at that!" Of course, former pubs featured on the tour and the evening went very well. Incidentally, the woman in the foreground is somehow looking a bit grumpy but this is not her normal demeanour. She is married to an Albion nutter who has been to every game for a couple of decades and is known for his loyal following. He even went to Italy to watch The Baggies despite having a broken leg! 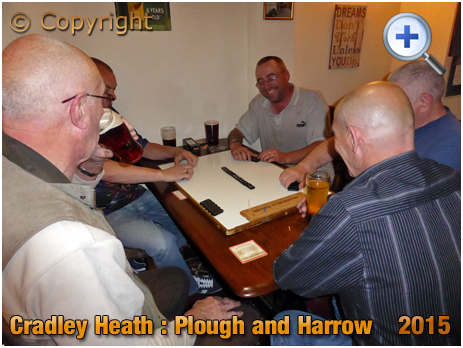 Following the walk we nipped into the Plough and Harrow for a beer. I am getting worried that dominoes is on the way out so I was pleased to see a group of regulars in the pub enjoying a game. They play in a local league made up of 14 other teams, the news of which cheered me up no end. The Plough and Harrow was very busy for a Thursday evening and we enjoyed our visit tremendously. The beers from the pub's operator Worcestershire Brewery were very nice, particularly the Copper Hopper. Abbeydale Absolution was also available as a guest beer. I wish the pub still had its old room layout but it's great to see the place thriving.

We enjoyed our visit to the Swan Inn at Halesowen yesterday evening. We had intended to go for a while, well, since its recent renaissance. And I am delighted to report that this is a venue for good beer. From the eight hand-pulls on offer, we tried five beers that we had not previously supped - and all were in very good condition, one in particular being quite majestic. I like to see at least one dark beer on offer so I was chuffed to find Welbeck Abbey's Portland Black, a nice rounded porter to start off proceedings. 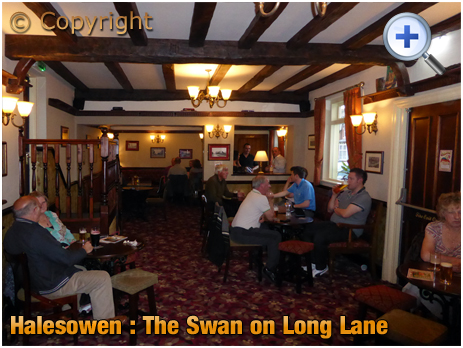 I have seen on the pub's page that they had an extremely lively cask of Session IPA brewed by The Hop Stuff at Woolwich. I can forgive the brewery for using the term IPA when the beer is only 4.2% because it packs quite a punch - quite similar to Brewdog's Punk IPA. Though stronger, Intrepid's IPA was more rounded but still highly quaffable. Worfield Brewery's Severn Gorgeous was lighter and very pale in comparison but did not disappoint, just didn't have the wham-bam effect of the previous drinks.

We didn't realise that we had left the best 'til last - probably a good job as we would have stuck on RCH's Double Header for the duration. Perfectly presented by the pub, this was a lovely dark golden hoppy beer with a superb malt balance. A terrific drink. The tariff is reasonable - £3 was the maximum price for beers of 5.4%. As you can see from the photograph, the Swan Inn has been quite well appointed by Black Country Ales. The walls feature a collection of local history photographs for added interest. Darts is also very much alive and kicking in the Swan, a pub we look forward to visiting again in the near future. 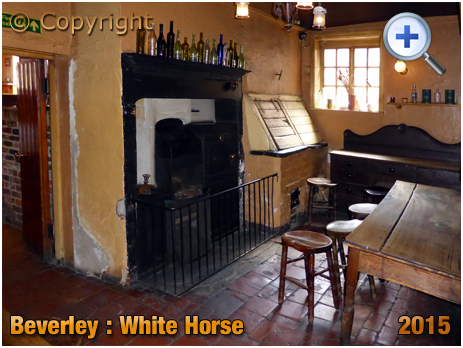 We have returned from another epic pub crawl adventure during our 355-mile coast-to-coast cycle ride across Cumberland, Lancashire, North Yorkshire, East Riding and Humberside. Although out of the Midlands region, there will be quite a bit to report. We have spent years looking for that next great pub experience and, of course, the search will continue. However, it is possible, perhaps, maybe, that we may not find a tavern to top Nellie's at Beverley. What an epic pub! It states in "Yorkshire's Heritage Pubs" that this "vernacular gem has evolved into a warren of stone-flagged and wood-floored rooms, still with gas lighting and warmed in winter by blazing fires in the old hearths." Hardly changed in over a century, the White Horse remains a busy hostelry. We pondered whether we had died and gone to the great boozer in the sky."