Blog for November 2021 with Photographs and Information

We cycled into Birmingham this morning so that we could show support for the Cop26 Coalition's global day of action for climate justice. We both feel strongly about the rise in temperature across the globe and the consequential suffering of those living in the lesser-developed world. We could sit on our arses moaning about the failure of politicians to properly address these issues at Glasgow or we could march. We chose to march. 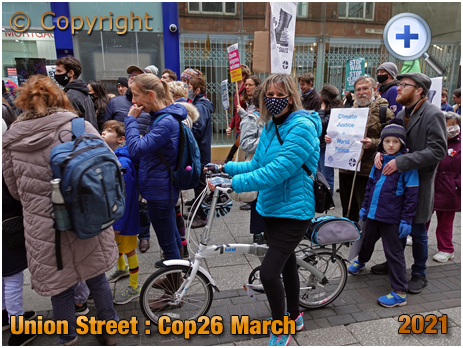 We cycled to Oldbury and, loaded up with delicious samosas and besan from Charlie's, pedalled into Birmingham along the canal. We hoped that those attending the march chose not to fly by private jet but also rode into the city or at least used public transport. We planned to cycle around the city along the canal network but were thwarted at the end by work on the HS2 project, an undertaking that is resulting in the loss of irreplaceable habitats, including ancient woodlands. And for what? Shave a few minutes off the time it takes for commuters to travel to London rather than create more jobs in the hinterland that is Birmingham. I boldly predict that the line will never be extended to the north and, consequently, is a complete white elephant. 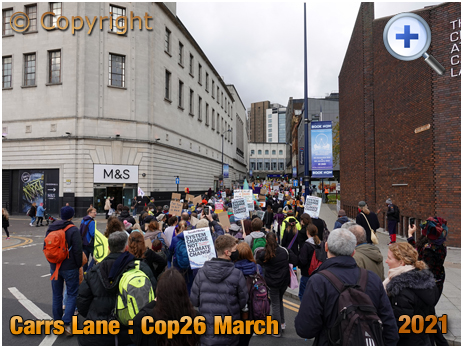 We joined the march not long after it had set off from Millennium Point at Eastside. As far as we could tell, we were the only cyclists to walk along the route pushing our machines, though another couple joined the march close to St. Philip's where a few individuals hurled some abuse at the activists. The Birmingham Live website estimated that the attendance was around 500, a tadge low in our estimate and I would have said closer to 1,000. This, it has to be said, demonstrates some apathy amid one of the most densely populated areas of the UK. Moreover, scanning the marchers the vast majority were white and, judging from the voices around us, many were middle class. No doubt the Moseley brigade were in evidence, the same people who help to make the leftfield music festival a success. Good people no doubt but the movement needs activism from all sectors of society to transcend preaching to the converted. 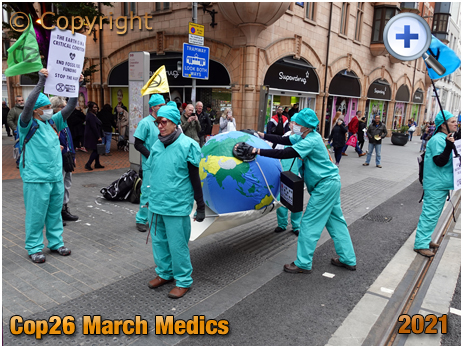 The Socialist and Communist movements were in evidence with their agenda of exposing the global corporations such as ExxonMobil, Shell, BP and Chevron, organisations that have extracted most of the fossil fuels over the last few decades. One man who cannot be criticised for his lack of conviction is the bible-wielding preacher in the High Street who lambasted marching participants by shouting: "You cannot save the planet, we are all going to die so repent." In my humble opinion it is not too late for the population to feel remorse for their lifestyles and make some game-changing decisions that can help save the planet. The march may have been aimed at the corporate and political world but it could be argued that some of the message should be aimed at consumers. Eating less meat, choosing not to fly, buying less clothing, and reducing car use are four things that could really make a difference. The corporate world thrives on consumerism so a reduction or rethink in spending would have considerable benefits for our climate.

We are glad that we supported the march but all we seemed to achieve was holding up the traffic for an hour and disrupting some people's Christmas shopping. The march was not even mentioned on Midlands Today. In February 2002 nearly two million people marched in London to oppose the imminent Iraq War. Tony Blair ignored them and still went to war. It is inconceivable that 1,000 people marching in Birmingham will make any difference to the planet.

We cycled home in the rain and close to home some bloke in a massive SUV gas-guzzler shouted some abuse out of his window. The sky was starting to be lit up with bonfires whilst rockets were sent into the deteriorating atmosphere leaving a trail of spent cartridges across the landscape. It is hard to change the world.