I am not a gardener, just a plodder trying to keep on top of the weeds. I view gardening as outdoor housework and would rather be riding my bike. However, over the years I have made an attempt here and there to bring a little colour to the garden and, most importantly, made it a place in which birds and frogs, along with other wildlife, can thrive and be happy. I have also tried to prepare for old age by making it a low maintenance garden. 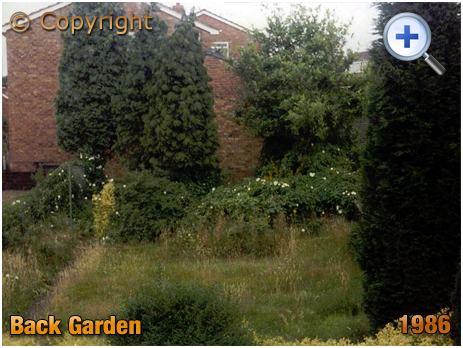 This is how the garden looked when I bought the house in August 1986. What a pile of weeds! No matter how much I let it slip I can always remind the neighbours of how it once looked. Things did not improve for a few years and it probably got worse. But I was only living here occasionally at the odd weekend as I was still in the army. I think it may have been my military background that deterred the neighbours from complaining. 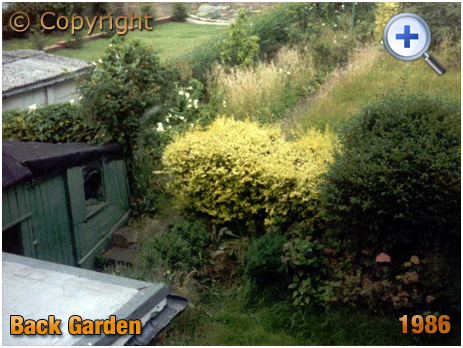 Another view of the back garden after purchasing la maison. Check out the bindweed. This has taken years to remove as the root structure, rather like spaghetti under the soil, is so extensive. Even today, a little bit pops up during the summer. It is a pity it is a nuisance as the trumpet-like white flowers are quite nice. However, once I see one pop up in July it is time to go to war and I go and get my digging equipment out. For the Gardener's Question Time devotees the plant is known as Calystegia sepium. 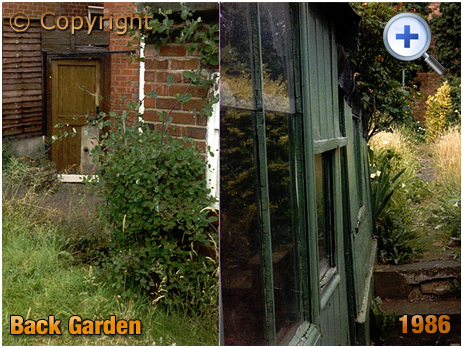 This is a couple more photographs of my garden just before moving in. Why did I think it was a good idea to take on this place - it is horrific. Moreover, the interior of the old house was in need of a total overhaul. The secret is in the price - does anybody remember the old MIRAS scheme? The limit was £30k and with the hideous interest rates in the mid-80s it was foolhardy to stretch the purse too far. I could have had a semi-detached in good nick for the same price but I wouldn't have been able to crank up the stereo and that was key facto numero uno - nothing can get in the way of music.

Pre-dating the war, the homemade shed was pretty horrendous and one Sunday I took great delight in approaching the building with a sledgehammer - oh, the fun you have when you have a sledgehammer in your hand. It's "Lethal Weapon" but with more carnage.

Believe it or not there was a greenhouse at the top of the garden - I didn't realise myself at first because it was hidden beneath the weeds. That patio had to be lowered as some idiot built it up above the damp-proof course. I undertook that job during the summer holidays of 1987 when I also dropped a field drain around the house. I removed 11 tons of clay in a skip and the driver refused to take it away claiming it was too heavy. To be fair it was, but I told him to take it away before he ended up in the skip with the clay - could have made an excellent "Breaking Bad" scene. When he used the chain-lift mechanism to hoist it onto the truck the feet that stabilised the vehicle went through the tarmac!

There is a spring on the hill that flows down through everyone's garden and with clay subsoil you can imagine the water retention. As a result, there is a lot of drainage work to be undertaken in order to relieve the situation. So more digging to create herringbone drains. This garden has been like a keep-fit exercise, or boot camp. 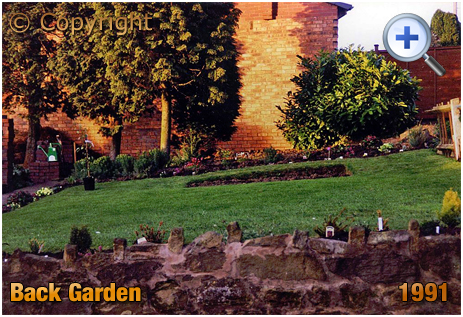 By the early 1990s the garden was at least tidy. Not that I take all the credit for this. Yes, I had done plenty of earth-moving but the day-to-day weeding etc. was getting difficult to keep up with as I was working all hours running the record shop. As a result I advertised in the Halesowen News for somebody to do three hours per week undertaking chores like mowing, hedge-trimming and a bit of weeding. I think this was around 1991 and I was offering £25, probably double the minimum wage at the time. Consequently, I was flooded by applicants and I had to hold interviews. It was odd to find people with ideas way above what was required. One woman would have been more in place at the Chelsea Flower Show.

I took on Reuben Billingham, a retired chain worker from Fatherless Barn. A lovely bloke with a quiet disposition, he was perfect. I felt a bit for him as he had worked hard all of his life and here he was having to do gardens for other people to earn a bit extra on top of his pension. This was his first undertaking but he took on other work and would cycle around tending to other gardens. Indeed, he cycled to most places. In the winter there was hardly anything to do but, unlike his other clients, I did not lay him off until the Spring. He would still come over and do a few chores. I would tell him not to come and I would still pay him. On the odd occasion I would be around when he turned up and I would make him a cuppa and have a chat. He spoke in the old Black Country dialect and I would find myself rolling back the years and using phrases that were disappearing from the region's language. We got to know each other and became well acquainted. Eventually, Rueben was getting on and finding it tiring so we came to the sensible decision to wind things up. I would go and visit him at Christmas and other times - his own garden was always immaculate. I miss him.

There are a lot of new plants in the above photograph. I used to buy them from a garden centre in Cradley, just up from the Why Not Inn. The site has since been developed for housing. It was handy but another important factor was the fact that, as a local outlet, they were using soil similar to that in the garden. Consequently, there was a good chance that the plants would fare well when transferred a short distance. The flower bed was used by the previous occupiers for roses. Not long after this I dug it out and put in moulded pond. 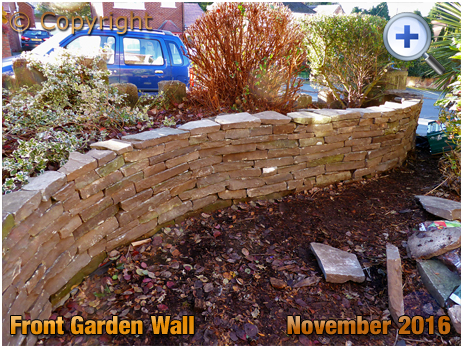 My new dry-stone wall in the front garden is complete. I am pleased with the result after humping tons of stone which I picked up on e-bay for £140 - this lot would have cost nearly £2,000 if I had gone to a garden centre, this view being only half of the stone. It is painstaking work as you lift a piece in place, no not quite right, lift it out, put another in etc. you can end up trying 20 pieces [the bottom or base stones weigh up to 35kgs] before finding the one that is just right. And then it is on to the next stone. I must have lifted some of the stones a zillion times! And it was all to find a new home for the soil I dug out for a new pond.