History of the Junction Tavern at Derby in the county of Derbyshire.

Some history of the Junction Tavern

The Junction Tavern was located on the eastern side of Junction Street, almost directly opposite the Great Northern Inn. The pub was next to the Baptist Chapel, a place of worship since demolished and converted to residential use.

The application for the the transfer of the licence in January 1903 illustrates the relationship of the Junction Tavern with the adjacent Baptist Chapel. The application was made by Walter Lester who wished to take over the licence previously held by Joseph Bramwell. Instructed by Mr. J. Priestley, Mr. Blaiklock appeared on behalf of the Derby Temperance Federation. In addressing the magistrates, he objected to the renewal of the pub's licence on the basis that it was next to the Baptist Chapel, along with the fact that the licence had changed hands several times in the previous few years and that it was near other licensed houses. Mr. Blaiklock told The Bench that "he had been instructed that the Baptist Chapel was there first, which made a considerable difference." He also argued that "almost immediately opposite to the Junction Tavern was the Great Northern Inn, and then just along at the corner there was an off-licensed house and other houses in the immediate neighbourhood." He therefore contended that the Junction Tavern "could not be needed, and the fact that of the repeated transfers and its position were reasons why it should be refused."

In representing the applicant, Mr. Joseph Ducker informed the Bench that "the house was held by a Joseph Blore up to 1900 for period of about 10 years, and at the end of that time had left it for a much larger house, not because he could not get a living at the Junction Inn, but because the prospect was better at the larger house." He went on the say that "the next tenant's wife did not think the licensed business was suitable for her husband, and she persuaded him to give it up at the end of ten months." Joseph Ducker then told the Bench that "the house was then transferred to Joseph Bramwell, who occupied it from January 1901 to December 12th," asserting that "Bramwell did not give up the house because it did not pay, but decided to go to the Marquis of Hastings Inn, of which he was now the tenant."

Joseph Ducker went on to tell the magistrates that "Mr. Blaiklock had stated that in this case the public-house came to the chapel, but that was not so. The foundation stone of the chapel showed that it was laid by Mr. Abell, ironfounder, on 10th April 1871." This, he told the Bench, "was long after the Junction Tavern was used as a licensed house." He went on to remark that "neither was there any evidence before the Bench to say whether the Junction Tavern or the or the Great Northern Inn was the older house; but the opportunity would arise on a subsequent occasion of going into all those questions, and determining which were the lesser required houses." Some merriment was created when the solicitor pointed out that "the new tenant of the house, Walter Lester, waa an old member of the chapel where he received his religious education." It transpired thta the beat testimonial that Walter Lester submitted to the Bench was written by Mr. W. J. Sergeant, superintendent of the chapel. Joseph Ducker argued therefore that "Walter Lester's early training would mean that he conducted the house so that it should not be a nuisance to the chapel authorities." The superintendent's only query regarding his application was that he should not keep pigeons, as the former tenant had.

Walter Lester's application was further strengthened by the fact that his brother was still a teacher at the chapel. The Bench were told that that "in the locality of the Junction Inn there were chemical manufactories and iron foundries where the men could not have their meals on the premises. A good many of the workmen went home to their dinners, but between 20 and 30 of the men had their dinners at the Junction Tavern." Moreover, it was stated that "they had their half-pint or pint beer, nothing was charged them for sitting accommodation, they sat about half an hour and then returned to their work, and when required food which they brought was hotted up for them free of expense. The magistrates were convinced that Walter Lester was a sound applicant and therefore granted the transfer of the licence.

The foundation stone of the chapel referred to in the sessions was in fact the one placed on a new church in April 1871. There had been a chapel in Junction Street since August 1860 when a small building was constructed. With the growth of the congregation, the trustees acquired an adjoining plot of land and, after pulling down the old chapel, erected a completely new church in 1871.

Like the Jolly Soldier across the street, the Junction Tavern started as a beer house. An early publican was Ralph Mordick who died in 1868, the licence passing to his wife Ellen. In March 1870 she re-married to Jonah Bestwick at St. Werburgh's Church. Two months later, on May 3rd 1870 the licence of the Junction Tavern was transferred to her husband. 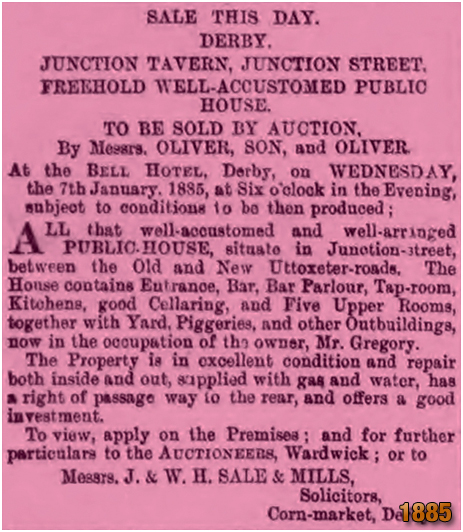 Benjamin Gregory was the owner-publican in the 1870s. He had married in the Bestwick family in December 1865. He and his wife Agnes advertised the property at the start of 1885 and the above notice provides a glimpse of how the old place looked in the Victorian period. The property was sold for £770. 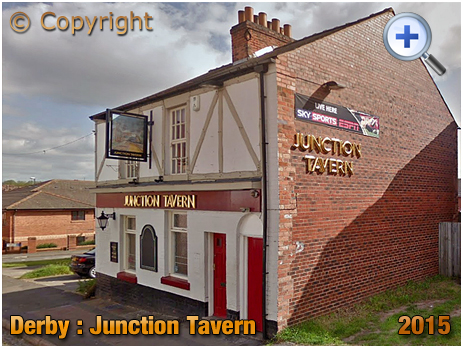 Along with his wife Kate, the aforementioned Walter Lester, a former cabinet-maker, kept the beer house for many years. They remained here until the mid-1930s before retiring and moving to Shardlow. Walter was the son of the policeman Francis Lester.

Licensees of the the Junction Tavern

If you have a genealogy story or query regarding the Junction Tavern at Derby you can contact me and I will post it here in addition to including your message within the website pages for Derbyshire Genealogy.

If you would like to share any further information on the Junction Tavern - perhaps your ancestors drank here in the past? Or maybe knew a previous publican? Whatever the reason it would be great to hear of your stories or gossip. Simply send a message and I will post it here.

"Benjamin Gregory was charged with having his house open for the sale of liquor at improper hours on the 23rd July. Defendant, pleaded guilty. Police Constable Dexter said whilst in plain clothes he visited, in company with, in company with Police Constable Flanders, the Junction Tavern, Junction Street. Whilst in an outhouse he saw the landlady take "something" four times into the next house. She had the "something" covered over with an apron. On entering the house he encountered the landlady coming from the cellar with a two gallon vessel of ale. Two men were on the premises but with nothing before them, and in the next house there were seven men. The defendant was in bed at this time, but said on coming down stairs that it was a good job it had happened, for it would put a stop to it. The Bench fined the defendant 20s. and costs, telling him that he would have his licence endorsed if he came again."
"Friday"
Derby Mercury : August 2nd 1876 Page 3.

"At the Derby Borough Police Court, on Tuesday [yesterday], before the Mayor, H. F., Gisborne, Esq., and J. Turner, Esq., James Cunnningham, on remand from Monday, wwas charged with stealing a duck, the property of Benjamin Gregory, of the Junction Tavern. The duck, dead, was now produced, and identified by Mr. Gregory, and the evidence given on the previous day was repeated. The duck, it appeared, was bought by a man named Samuel Brailsford, for the sum of 3s. Prisoner's excuse was that he was out of work, and that his children were "clamming." The Chief-Constable said that the prisoner had bean charged with leaving his children chargeable to the parish, and with other offences. Sentenced to two months' hard labour."
"Stealing a Publican's Duck"
Derby Mercury : November 26th 1879 Page 5.