We finally got around to watching The Revenant last night. To be honest, I felt a little guilty sitting in a warm living-room watching Leonardo DiCaprio suffer for his art. He went down with a flu a couple of times during horrifically cold temperatures on location in the unforgiving landscape of Alberta. Perhaps we should have dragged the telly into our frosty January garden and endured a little discomfort just for a reality check. In a former life I have spent periods in freezing conditions and slept in snow-covered forests during the winter. During one particularly cold week the temperature dropped to minus 12 and I couldn't feel my hands or feet at all. However, this was nothing to the minus 30 degrees the film crew battled through to get this story on film. I imagine a good number of them had some sort of personal crisis during the shoot. The cinematography is, of course, quite epic and deserving of the subsequent Oscar award. Was Leonardo DiCaprio worthy of the statue? Well, I find in favour of Bryan Cranston's performance in "Trumbo" but recognise that "The Revenant" was a tough movie for the main actor who had little dialogue. His grunting and facial expressions however were pretty authentic. Not so with the story unfortunately - not that the real-life biography of frontiersman Hugh Glass will ever be verifiable amid the many accounts and legends that circulated during the 19th century. One thing is for sure, he sounded like one tough cookie. He was a man that even Bear Grylls would doff his adventurer's hat to. Tom Hardy was excellent as the despicable John Fitzgerald and, together with DiCaprio, he battled through one of the most realistic fight scenes on celluloid. No plot spoilers here but it was as grizzly as the frightening bear. "The Revenant" is not a film to be enjoyed but one to be endured.
Watched on January 20th 2017 | Rating : 9 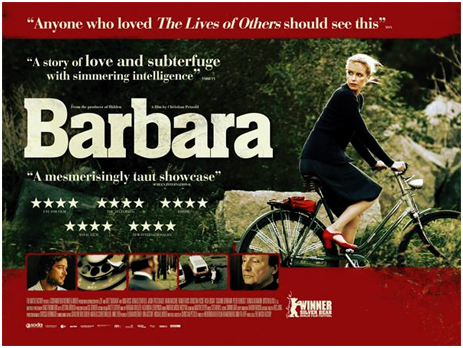 Generally known for his suspense thrillers, German film-maker Christian Petzold on this occasion has filmed a story from a small town close to the northern coastline where escape to Denmark is the dream of those oppressed by the Stasi regime in 1980. Nina Hoss is excellent as Barbara, a doctor banished to the provinces after applying to leave for the west. Her escape route is seemingly via a West German businessman but she faces a dilemma by her growing affection for a colleague with idealistic morals and a passion for the arts. The period is authentically captured on film by Petzold and the sparsity adds to its magnetism. Highly recommended.
Watched on May 5th 2017 | Rating : 9 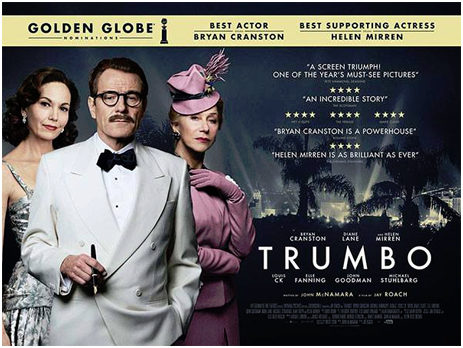 This was my first viewing of Bryan Cranston since "Breaking Bad." It is a measure of his performance that I completely forgot about Albuquerque's most famous chemistry teacher. He was nominated for an Oscar for his portrayal of Dalton Trumbo, one of the Hollywood Ten who served a prison sentence for refusing to testify in front of the Un-American Activities Commission. Black-listed by the film industry, he won two Oscars using different pseudonyms before his name was restored to celluloid by Otto Preminger and Kirk Douglas in "Exodus" and "Spartacus" respectively. The New Zealand actor Dean O'Gorman pulls off the role of Kirk Douglas with aplomb, though the best co-starring performance is that of John Goodman playing the baseball bat-wielding B-Movie mogul Frank King. This chapter of Hollywood's shameful past has been dealt with previously, most notably with George Clooney's excellent "Good Night, and Good Luck" in which David Strathairn was superb in the role of Ed Murrow, the journalist who fearlessly went after Joseph McCarthy. "Trumbo" falls short in that it is less gritty and arguably glosses over some of the protagonist's barbed traits. Some of the detail is lost in the production - for example, in the blacklisted period, he appears to be working in a suburb of Los Angeles when in fact he was operating out of Mexico City. Viewers can however prime themselves by watching the 2007 documentary written by Christopher Trumbo, the son who forged a successful career in film and television. There are some Hollywood big-names who, if the viewer had been previously been unaware, come out of "Trumbo" with their reputations in tatters. And if Helen Mirren had delivered some of her acidic remarks in Cranston's Crystal Meth days she would no doubt have ended up in a plastic barrel and shipped out to the desert. "Trumbo" is a significant film for movie fans and well worth your ticket at the box office. It could have been better but there is much to enjoy and learn. Bryan Cranston is remarkable, particularly in his delivery of Dalton Trumbo's emotional 1970 speech to the Writer's Guild of America encapsulating the period in which "the blacklist was a time of evil and that no one on either side who survived it came through untouched by evil."
Watched on September 12th 2015 | Rating : 8 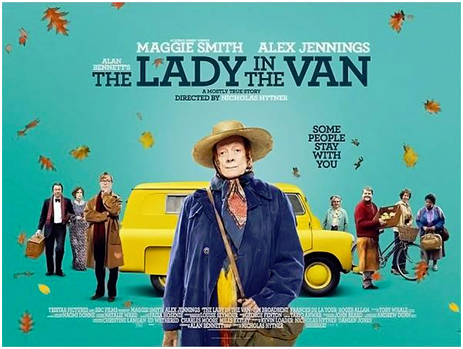 We watched Nicholas Hytner's screen version of Alan Bennett's "The Lady In The Van" on Christmas Eve. We enjoyed the film though the portrayal of Mary Shepherd [or Margaret Fairchild] was very sympathetic given that she reportedly made Nigel Farage seem like an extreme left-winger. Still, Maggie Smith played the part wonderfully and Alex Jennings was a pretty convincing Alan Bennett. I particularly liked his dual personality, or inner self, being in the same shot for much of the film. 15 years on his front drive - it must have been quite a test for him, particularly when he trod in her shit on the paving slabs! I burst out laughing when he went into cleaning mode after he let her use his toilet. I noted that the playwright's house in Primrose Hill cost just over £13,000 in the early 70s - these properties now sell for over £3m There is some lovely piano music in the film [she was a concert pianist in her early life] and I will possibly buy the soundtrack. A film certainly worth watching.
Watched on December 24th 2016 | Rating : 8 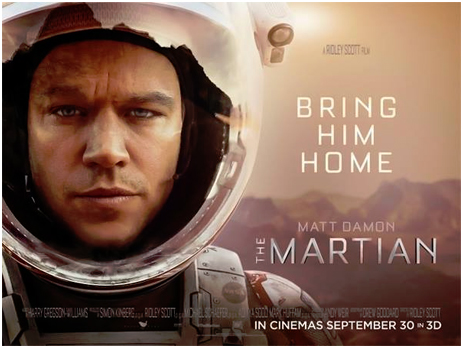 The DVD of this film was retailing for £5 so I stuck it in the trolley when doing some shopping in Sainsbury's. I thought it might be entertaining Christmas fodder as it did get good reviews on release. From time-to-time I can tolerate a blockbuster for a bit of leisurely distraction. Unfortunately, I found this space saga rather tedious. There is a limit to how far one can be expected to stretch the imagination. This went way beyond any form of credibility. Even the little details such as the time delay for video signals from Mars to Earth were eschewed so that the audience could watch in real time with no thought of buffering even though they cannot even get a decent connection with their ISP at home! Somebody like Robert de Niro would have starved himself for two years and shot the scenes in reverse in order to convey the reality of having to live on a potato diet for several years. Matt Damon was, on the other hand, looking buff throughout his ordeal. And having present-day cars and mobile phones in a film set way, way into the future was silly. So that I do not do a plot-spoiler I better not describe the utterly ridiculous mission strategy in order to save the astronaut. And I haven't even started on the 1970s disco soundtrack. The Martian won a Golden Globe and was nominated for 'Best Picture' in the Oscars. Really? The film poster says "Bring Him Home" ... I say "Leave Him There!"
Watched on December 27th 2016 | Rating : 5 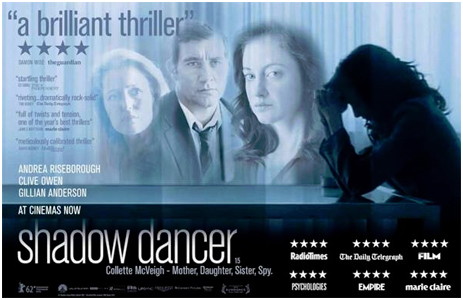 With a bargain price tag of 90p, finding the Blu-Ray for "Shadow Dancer" in a charity shop resulted in us watching this unsentimental film set in Northern Ireland during the run-up to the Peace Agreement in the 1990s. The story focuses on a Catholic family and the turmoil in which they find themselves when M15 turn up the pressure, leading to confused allegiances being formed. If I describe anything more it will spoil the plot but I would recommend you watch simply for a fairly convincing portrayal of life in Belfast during this period. Both the isolated meeting place held at the same time every week and the interrogation process were flawed but most of the story just about hangs together. The best performance was by David Wilmot as an IRA enforcer searching for treachery within. Gillian Anderson plays her role coolly and spares the audience of the titillation of Detective Superintendent Stella Gibson in her other tour of duty in Northern Ireland.
Watched on January 19th 2017 | Rating : 7 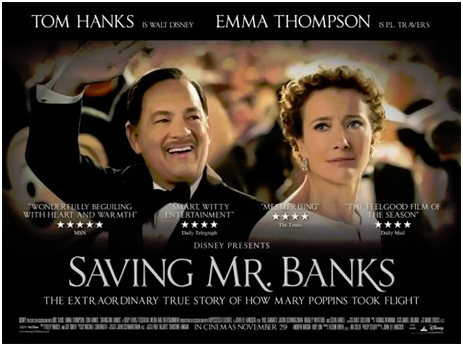 The Christmas schedule doesn't usually throw up many films that I want to watch but this year there was a little treasure in "Saving Mr. Banks." To be honest, I was not sure if I would like the film but I thought I would give it half-an-hour. It turned out to be quite lovely. Tom Hanks played the part of Walt Disney quite credibly, though he is one of the Hollywood superstars that can really act. I wondered if Emma Thompson was over-playing the haughty Pamela Travers [or should I say Ms. Travers] but when you hear the tape at the end of the film you realise she really was one conceited Aussie. I have to confess to having a particularly close relationship to the original musical as it was the first film I ever saw at the cinema. My elder sister took me to The Royal in Cradley Heath to watch this colourful extravaganza [remember we only had black-and-white at home in those days]. On returning home my mother asked me what I thought of the experience and, as a young innocent boy, I said "Mum, you won't believe the size of the telly they've got!"
Watched on December 23rd 2016 | Rating : 8