History and Information on Churcham in the County of Gloucestershire.

More information on Churcham to follow. I probably created the page as I had a link to Churcham from another page. When building the site it is easier to place links as they crop up rather than go back later on. I realise this is frustrating if you were specifically looking for information on Churcham. There is information on Gloucestershire dotted around the website - click here for a suitable starting place. 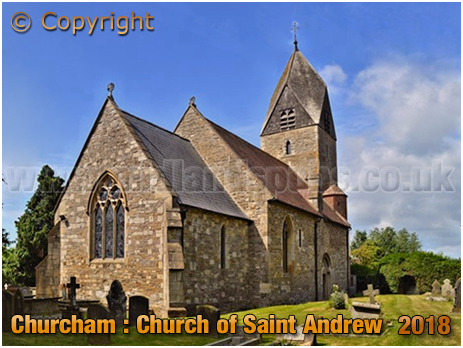 If you have a genealogy story or query regarding Churcham you can contact me and I will post it here in addition to including your message within the website pages for Gloucestershire Genealogy.

If you would like to share any further information on Churcham - perhaps you drank in one of the pubs in the past? Or maybe knew a previous publican running one of the boozers? Whatever the reason it would be great to hear of your stories or gossip. Simply send a message and I will post it here.

"A remarkable case of death from burning has been reported to the police. On Sunday a man named Samuel King called at the house of William Barnes, Oakle Street, and found the charred remains of the housekeeper, Mary Price, who was about 80 years of age, together with what was left of a burned sofa, in the kitchen. Deceased sometimes had fits, but the exact circumstances under which she and the sofa were set on fire remain to be investigated coroner's jury. William Barnes, who is 98 years of age, was in bed upstairs, and was not aware of the tragedy below; he did not know there had been a fire, nor did he hear anything. It is easy to conceive that the fire might have claimed two victims instead of one had it not burnt out without spreading. The damage to the kitchen and room over is estimated at £100. The premises, which belong to Mr. Frederick Harvey, of Highgrove House, Minsterworth, are insured in the Norwich Union Fire Office."
"Burned to death at Oakle Street"
Gloucester Citizen : December 26th 1893 Page 4

"At an inquest held by Mr. M. F. Carter, Dean Forest Coroner, at the Oakle Street Hotel on Thursday, on the body of an unknown man whose badly mutilated body was found on the Great Western Railway in the neighbourhood of Oakle Street Station on Tuesday evening, a verdict of suicide was recorded. John Harold Clifton, signalman at Oakle Street Station, said he went on duty about 8 o'clock on Tuesday night. At 8.20 he saw a goods train approaching from Gloucester, and saw yards away a man cross the up line. The engine-man blew his whistle a number of times. The man walked across quite slowly. The driver blew his whistle again but the man seemed to step onto the rails right in front the engine. Ernest G. Ireland, the driver of the train, said that as he came to the down distance signal at Oakle Street he noticed a man coming towards the train. He blew one long blast on the engine whistle, but the man seemed to take no notice. He gave another longer whistle, and then lost sight of the man. He turned to his mate and asked if the man had come or jumped to his side. but his fireman replied "No." He [witness] immediately applied his brakes and informed the signalman. The first he saw of the man was to see him walking up the line about 150 yards away. The fireman. Thomas William Bassett, gave corroborative evidence. The deceased, it was stated, was about 45 to 50 years of age well built with black hair and moustache, badly decayed teeth, and full faced, wore a dark suit. He was of the tramping class."
"The Railway Fatality at Oakle Street"
Gloucester Citizen : June 2nd 1922 Page 6