Inn Signs from around Great Britain 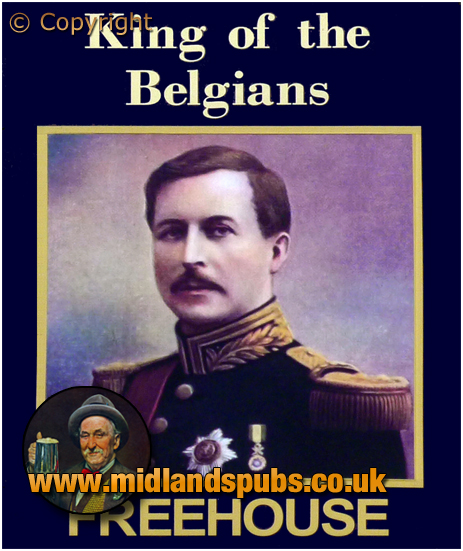 This inn sign at Hartford near Huntingdon depicts Albert I who reigned as King of the Belgians from 1909 to 1934. However, this historic tavern was formerly known as the King of Prussia, a sign that generally referred to Frederick The Great who was viewed as a hero in England following his alliance against the French in 1756. There were other public-houses bearing his name but, following the outbreak of the First World War, the sign became rather awkward for publicans and would no doubt be bad for trade. Most changed the name of their house and this pub converted to King of the Belgians. Ironically, this monarch had close connections with Germany. However, he opposed German forces entering Belgium in 1914 and subsequently served in the Belgian army, particularly during the Siege of Antwerp and the Battle of the Yser. King Albert I died in 1934 at the age of 58 when mountaineering in the Ardennes region of Belgium near Namur. He was succeeded by his son Leopold. 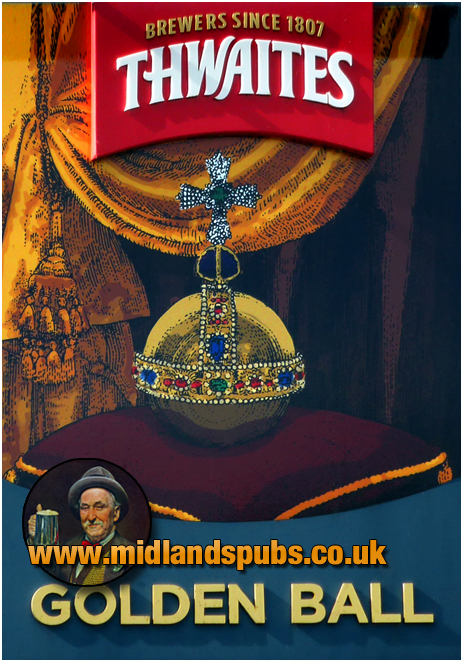 The signboard of this Thwaite's-operated hostelry at Pilling was displaying an image of a royal orb in 2017. Such an orb was used in Christian symbolism and is thought to have originated with the Roman emperor Constantine the Great. Following his conversion he is supposed to have added a cross to a golden ball that he had already adopted. The land on which this Golden Ball Hotel was built was formerly owned by Major Edmund Hornby of Dalton Hall near Burton-in-Kendal. A branch of the Hornby family were engaged in the silk trade. A golden ball was once traditionally displayed by silk merchants. A possible explanation for this inn sign on The Fylde, particularly as the property is not too far from the once-important ports of Glasson and Lancaster. 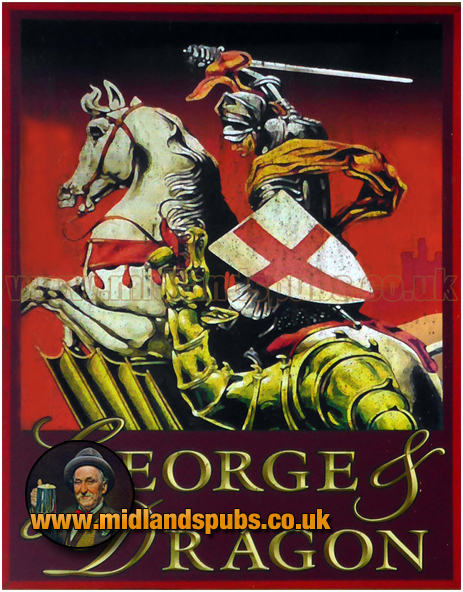 It was perhaps inevitable that a boozer on St. George's Quay should be named after the patron saint of England who is celebrated on the feast day of April 23rd. Although there is no historical record of his existence, he was venerated from at least the 6th century as a soldier who had been one of the early martyrs. His killing of the dragon to rescue a maiden is a medieval invention. In 1969 the Vatican, with a greater regard for historical truth than for English sensibilities, removed him from the official calendar of saints. 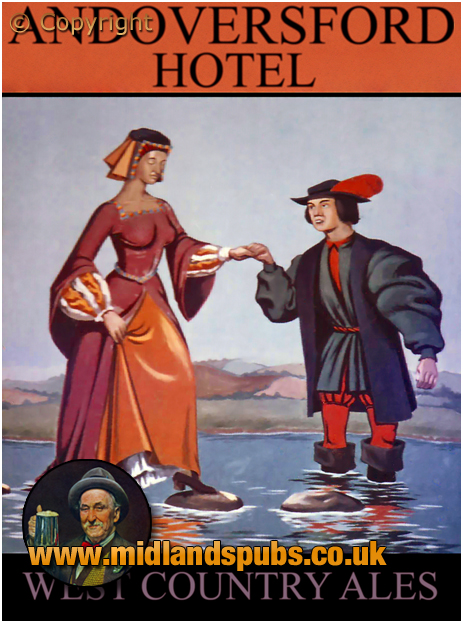 Photographed in 1971, this is a charming interpretation of this place-specific sign. The name Andoversford is thought to mean Anna's Ford so the artist illustrated an Elizabethan courtier helping a lady across the stepping stones. Sadly, the Andoversford Hotel closed in 1988 when the pub's passing trade was lost to a new by-pass. The site has since been redeveloped with new housing. However, the post for this sign remained in place and was later used for the village sign. Featured in a trade directory for 1889, the hotel was described in an advertisement: "Pleasantly situated on the Cotswold Hills, six miles from Cheltenham, five minutes from the railway station, and within easy reach of four good packs of hounds. Post horses and carriages for hire. Good stabling and loose boxes for hunters. Hunters summered. Excellent bed rooms and private sitting rooms. Special terms for boarders. Good trout fishing. Tennis courts, swings, etc. Dinners and teas provided for picnic and pleasure parties. Splendid drives from the hotel to Chedworth woods, Roman Villa, Foss Bridge, etc. C.A. Arkell, proprietor." 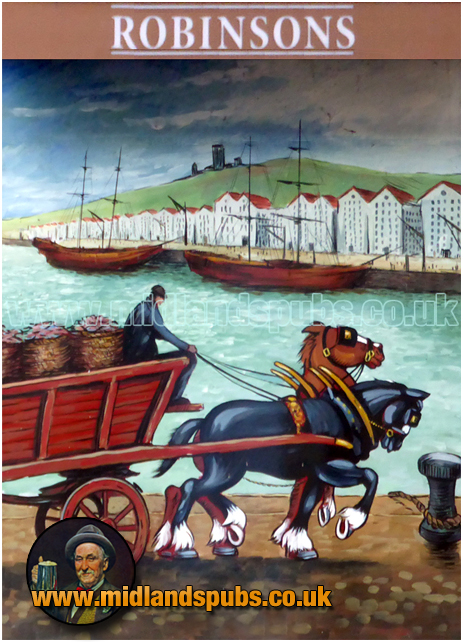 Robinson's tend to have nice inn signs outside their houses and this one is lovely. The artist has painted an old image of Lancaster's port with the Castle and Priory in the background. A wagon is hauling goods along the quayside. The Wagon and Horses name is naturally very common as they were the principal means of transportation before the advent of the railways. Moreover, it was not just beer deliveries that involved pubs and inns - many publicans acted as agents and all manner of goods could be left there where they would either be forwarded or collected by locals to whom they were addressed. The Oxford Dictionary prefers the spelling waggon, but wagon has also been in use for many years and is the modern term favoured here in Lancaster. 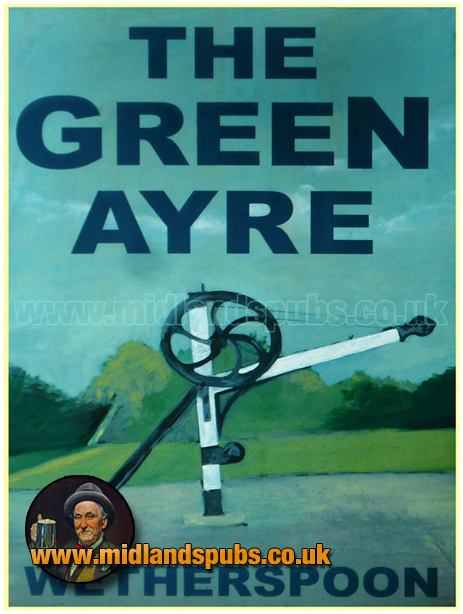 When I took this photograph in September 2017 this branch of Wetherspoon's had been closed for over a year. The floods that hit Lancaster in December 2015 caused substantial problems in the cellars of these former shop premises. Other public-houses in the locality were also affected. The Bobbin, a large pub close to the bus station, was under three feet of water during the flooding. This signboard shows an old goods crane, the type of which was used at Green Ayre wharf by the Quaker merchant John Lawson. The site of the Green Ayre Railway Station was also a short distance from the pub. The station was opened in 1848 by the Morecambe Harbour and Railway Company and the line originally ran from Lancaster to Morecambe Harbour. Following the amalgamation of the MH&R and the Little North Western Railway, the line was extended to Skipton by 1850. The railway was later acquired by the Midland Railway and this company electrified the Morecambe to Lancaster line in 1908. The line was a victim of the Beeching Cuts and closed to passengers in 1966. Much of the line now forms a cycle path, part of which is the Coast-to-Coast route between Morecambe and Bridlington. 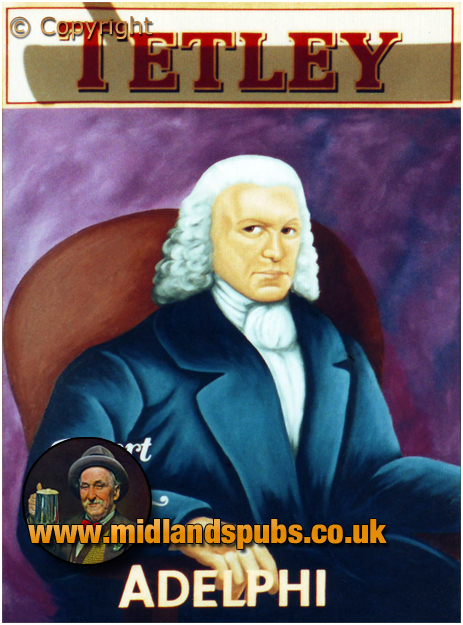 The Adelphi became quite a popular pub name in the 19th century but is hardly seen these days. Adelphoi is the Greek word for brothers and this explains the sign's origin. Pictured here is Robert Adam, the most celebrated of four architect brothers. With his siblings John, James and William, he designed an ambitious development between The Strand and the River Thames and, proud of their achievement, they named it after themselves. Sadly, hardly any of the buildings remain - many of which were riverside houses raised on arches. The son of the architect who designed the Edinburgh Royal Infirmary, Robert Adam was born at Kirkcaldy and educated at Edinburgh University. Influenced by his studies of Classical architecture in Europe, he was appointed architect to the realm in 1762 but resigned when returned to Parliament as member for Kinross-shire. Working closely with his brother James, his work includes the Glasgow Royal Infirmary and the Register Office in Edinburgh. He died in London on March 3rd 1792. 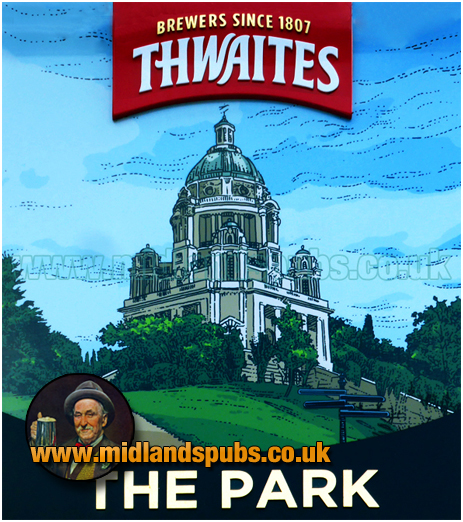 I took this photograph of The Park's inn sign in 2017 as we walked up to Williamson Park but, being as it was early in the day, we were unable to venture into the pub. The Thwaite's sign features an illustration of the Ashton Memorial in the park, a building commissioned by Lord Ashton as a tribute to his late wife. Overlooking the city and surrounding countryside, the memorial was designed by John Belcher, the work being completed in 1909. The former Palm House next to the Ashton Memorial has been transformed into a tropical oasis and houses a large collection of butterflies. 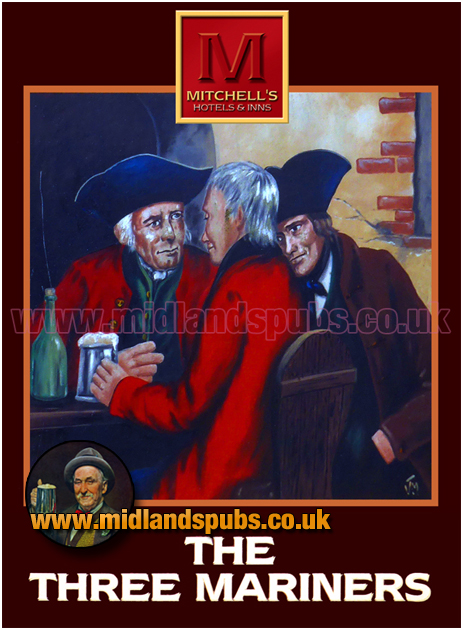 Does this inn sign for the Three Mariners at Lancaster show merchants striking a deal or a trio hatching some sort of smuggling plot? The pub, formerly known as the Red Lion and the Carpenters' Arms, dates from the late 17th century though it is thought that a tavern has existed on the site since the 1400s. As the Carpenters' Arms, the house had a shocking reputation in the 19th century. In 1849 the licence was only renewed after owner had "got rid of all the disorderly characters who occupied the upper part of the premises." In the same year the publican, Charles Swithenbank, was summoned for allowing prostitutes to gather in the pub. In earlier times, it is claimed that prisoners at the castle were given their 'last drop' at this public-house before their execution. Given all this, it is a very tame inn sign, one that could have been daringly shocking to passers-by. 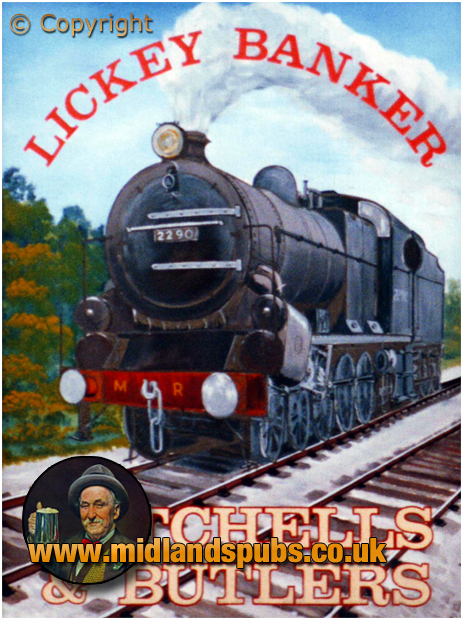 An inn sign to excite steam buffs. This Rubery boozer celebrates the steam locomotive that was built in 1919 by the Midland Railway. Designed by James Anderson, the sole purpose of this locomotive was banking duties on the Lickey Incline in Worcestershire. Here the 0-10-0 steam locomotive can be seen in its original Midland Railway colours and bearing the number 2290. Under the London, Midland and Scottish Railway it became 22290 and then 58100 when operated by British Railways. Railway workers dubbed the locomotive "Big Bertha" or "Big Emma." After years of service, the engine was withdrawn in May 1956 and scrapped at the Derby Works two years later. As if to prove that modern pub companies cannot do anything right, the signboard of 2015 [shown below] had a generic illustration showing the GWR 7800 Class 7822 Foxcote Manor which operated in Shrophire and Wales for much of its working life. 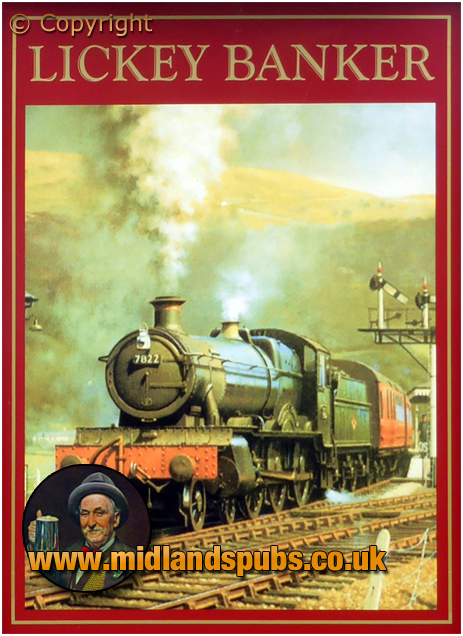