History of the Shamrock Inn in Orchard Street at Leicester in the county of Leicestershire.

Some history of the Shamrock Inn

The Shamrock Inn was located on the north side of Orchard Street on the northern corner of Royal East Street. In 2017 [see photograph below] a car park occupied the site of this public house. The Shamrock Inn had competition for custom in the neighbourhood, notably with the Red Cow on the corner of Belgrave Gate. There was also a beer house at No.15 Orchard Street called the Red, White and Blue, a patriotic reference to the Union Jack. This could have been a response to the Irish character of this inn sign. 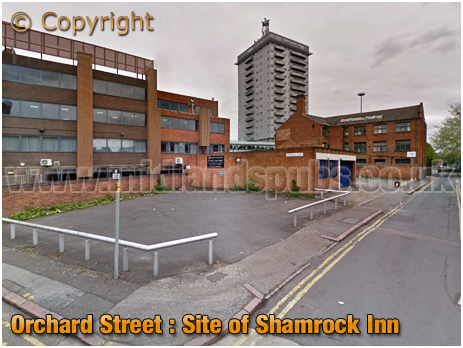 For some reason James Lander only held the licence for a month. In February 1882 the licence was transferred to Joe Noble. Along with his wife Rose, he had previously kept the Sir Robert Peel on Bedford Street.

Joe Noble was providing music entertainment for his customers at a time when new legislation was introduced whereby publicans had to apply for a music licence in order to continue with such activities. Consequently, he went before the magistrates in November 1884 where his solicitor told the Bench that there was no special room set apart as a music hall, but the publican had installed a piano three years earlier and engaged a musician to play the instrument. The piano had initially been placed in the vaults of the Shamrock Inn but more recently had been moved to a billiard room upstairs where there was more room to accommodate music nights. The magistrates heard that, although Joe Noble engaged people to sing, they were amateurs who received no payment. The Chief Constable objected to a licence being granted to the Shamrock Inn on the grounds that the room in question was too small and not adapted for the purpose. Accordingly, the magistrates refused the application.

The decision of the magistrates was perhaps a key factor in the decision to move. In May of the following year the licence of the Shamrock Inn was transferred from Joe Noble to Henry Joynes. The Noble family moved to the Magazine Inn at Newarke Street before taking over at the Globe Inn on Silver Street. Given his penchant for music entertainment, I suspect that this Joe Noble or his son, also named Joe, was later the manager of the Boulevard Electric Theatre in the High Street.

Thomas Orton was publican for a short period at the Shamrock Inn. He kept the pub with his wife Sarah. However, although he later managed the Old Bowling Green Inn on Oxford Street, he was not with his wife as the couple had separated in 1898. Indeed, this became the subject of a court case in March 1899 when the 49 year-old mechanic of Roslyn Street was summoned by his wife for desertion. Sarah Orton applied for an order under the Married Women's Act of 1895. She told the Bench that she was married in May 1886. She and her husband afterwards became tenants of the Shamrock Inn, Orchard Street. A valuation subsequently took place, by which her husband benefited to the extent of between £200 or £300. She added that "he was also the owner of house property and building shares." He left her in December 1898. He then gave her £10. Since that time, she told the Court, that "he had contributed nothing towards her support, although she had repeatedly asked him to do so." When cross-examined, Sarah Orton said she was not applying for a separation, but a maintenance order for herself and child. She denied that she had given way to drink, and that this was the cause of her husband's alleged desertion. Thomas Orton's solictor pointed out that all went well between the two until 1896, "when Mrs. Orton had taken to drink. On this account her husband was obliged to leave the house." Dr. Thomas was called, and he said that "when he attended Sarah Orton she was suffering from gastritis and insomnia, due to alcohol." Thomas Orton wanted both separation and custody of their child. The magistrates, after deliberating for some time, granted a separation order, ordering Thomas Orton to pay his wife 15s. a week, and the mother was to have the custody of the child.

Frederick Doody was mine host at the Shamrock Inn during the Edwardian period. Born in 1849 in Birmingham, he married Elizabeth Louks in 1871 and the couple established a home in Hockley where he worked as a bone button turner. Frederick and Elizabeth moved to Leicester by 1888 where they both continued to work in the bone button trade.

Frederick Doody died in 1915, the same year in which daughter Charlotte married George Sharman. He succeeded Frederick Doody as licensee of the Shamrock Inn.

"On Saturday morning last, an elderly man, named John Worth, was found hanging by the neck in an outhouse behind the Shamrock Inn, Orchard Street, in this town. When cut down he was quite dead. The deceased began life as a farmer in comfortable circumstances. He was a man possessing some property, and he married a wife with a fortune of £4,000. But his life was passed in reckless conduct, and he evinced a quarrelsome temper. His relations had discarded him in consequence, and he had latterly lived by casual employment and on the uncertain charity of acquaintances. He had more than once declared an intention to destroy himself. At an inquest held on the body, on Saturday last, before John Gregory, Esq., coroner, a verdict was returned by twelve of the jurors that "the deceased destroyed himself when labouring under a temporary fit of mental insanity."
"A Sad Story"
Leicester Chronicle : July 2nd 1859 Page 3

"Thomas Chamberlain, landlord of the Shamrock, Orchard Street was charged with refusing to admit a police constable, on Sunday morning. Mr. Chamberlain appeared for the defence. P.C. Kendall said he was on duty about one o'clock on Sunday morning, and heard a great disturbance in defendant's house. He went and knocked at the door, but defendant refused to open it and said he would have no policeman there that night. It was argued for the defence that the defendant had just turned out a noisy company, and that the policeman first went to the back and then to the front door several times, without saying who he was, from which it was inferred that one of the people who had been turned out desired again to be admitted, consequently defendant refused to open the door. Fined 10s., or one month's imprisonment."
"Refusing To Admit A Constable"
Leicester Chronicle : June 24th 1865 Page 5

"John Garrity, labourer, A Court, Woodboy Street, and Martin Garrity, labourer, Green Street, were summoned for assaulting William Bradford, licensed victualler, Shamrock Inn, Orchard Street, on the 12th March, and further with being disorderly and refusing to quit the premises. Martin Garrity did not appear. Complainant said on Saturday last the defendants were in his house and wanted to "spar" with one another. He told them they must be quiet or else go out. They would not desist, and he put John out, but he returned and assaulted witness. He requested them to leave several times, but they refused, and witness had to send for the police. Inspector Hawkins said he was called to the Shamrock Inn last Saturday night. He saw the defendants in the vaults in a very excited condition. Bradford complained to witness that he had been assaulted by the two men, and showed witness his left arm, which was bleeding, as the result of a bite. The landlord requested witness to turn them out, but they went on being requested to go. John had been before the Court seven times previously, the last occasion being in 1882. He was fined 10s., or seven days. Martin had 26 charges against his name, and he was ordered to psy a fine of 20s., or go to prison for 14 days."
"A Public House Row"
Leicester Chronicle : March 19th 1887 Page 6

"An inquest was held before Mr. G. F. Harrison, at the Shamrock Inn, Orchard Street, on Wednesday morning, touching the death of Albert Hughes, aged 28 years, a framesmith. The deceased, who lodged at the Shamrock Inn, had been unwell, and kept his bed during Saturday and Sunday. On Monday morning Mr. Newcombe, the landlord of the inn, sent a man named Cross to attend to Hughes, who died in his presence about 11.30 that morning. Dr. Dixon, wbo saw the body after death was of opinion that death had resulted from failure of the heart's action, and a verdict of natuiai causes was returned."
"Sudden Death"
Leicester Chronicle : January 5th 1889 Page 6 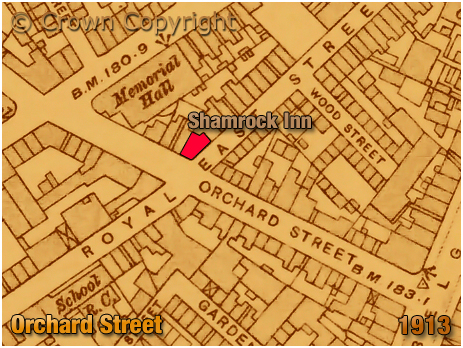 This map extract shows the location of the Shamrock Inn on the corner of Orchard Street and Royal East Street.

If you have a genealogy story or query regarding the Shamrock Inn you can contact me and I will post it here in addition to including your message within the website pages for Leicestershire Genealogy.

If you would like to share any further information on this pub - whatever the reason it would be great to hear of your stories or gossip. Simply send a message and I will post it here. 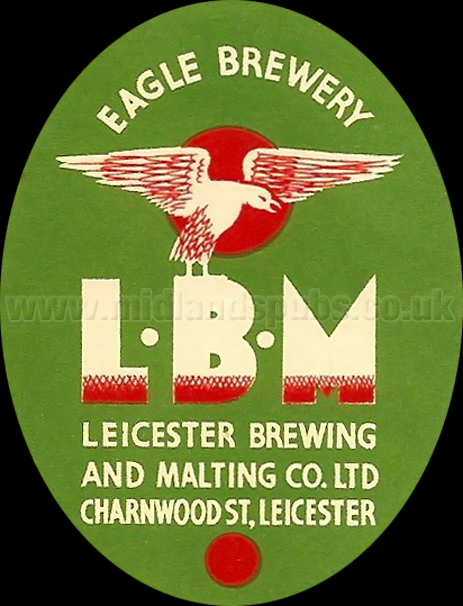 "About eleven o'clock last night a man named William Cowton, aged 59, a tailor, who lodged at the Shamrock Inn, Orchard Street, died very suddenly at that house. Medical assistance was procured on his being taken ill, but it proved of no avail. The cause of death is not known, but an inquest will be held."
"Sudden Death"
Leicester Chronicle : July 16th 1881 Page 8

"Mary Hielding, 25, Orchard Street, was summoned for assaulting Elizabeth Robinson, on the 22nd March. Complainant, who appeared with her head in bandages, stated that she saw the defendant in the Shamrock Inn on the date named with another woman's husband. Complainant spoke to her about it, whereupon defendant struck her three times on the head with a tumbler, rendering her unconscious. She was ultimately taken to the Infirmary. Defendant said Mrs. Robinson struck her first and "pulled her nose." This was borne out by the evidence of a little girl named Ellen Parr. The Mayor said the assault, although an unwarrantable one, was to some extent provoked by the complainant's conduct. A fine of 10s. and costs, or 10 days, was imposed."
"A Dangerous Assault"
Leicester Daily Mercury : March 26th 1890 Page 3