History and Information on Packington in the County of Leicestershire.

Some history of Packington 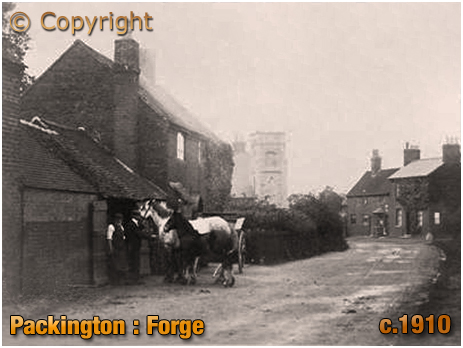 If you have a genealogy story or query regarding Packington you can contact me and I will post it here in addition to including your message within the website pages for Leicestershire Genealogy.

If you would like to share any further information on Packington - perhaps you drank in one of the pubs in the past? Or maybe knew a previous publican running one of the boozers? Whatever the reason it would be great to hear of your stories or gossip. Simply send a message and I will post it here.

"A lamentable instance of the results of over-indulgence in drink has occurred during the past week at Norton. It appears that a woman, named Frances Elizabeth Miller, aged 51 years, and her husband, both of whom live at Norton, went to Ashby on Tuesday, the 21st Jan., to draw Miller's pension money. They started on their return journey about a quarter past two in the afternoon. The woman was very drunk, and her husband, after vainly trying to get her home, left her on the road, he making the best of his way home to look after the four children. It appears it has usually been the woman's practice to drink heavily on pension pay days, and her husband had on several previous occasions left her on the road, but she usually reached home safely, though on one occasion she got in the pigsty. and left her boots there. On Wednesday morning about half-past ten she was found dead in a ditch by a man named Arthur Pass, who was going from Packington to Meacham. From appearances on the side of the ditch it seemed that the woman had stumbled about before she fell in, and her bonnet was found a distance from where she lay, but her cloak was beside her in the ditch. She was removed to Packington and on being searched a bottle containing whiskey and two pipes were found in her pocket. She was last seen alive by a woman named Martha Poxon, of Packington, who saw her run after a wagon and try to get hold of the cratch, but she was so drunk she could not. She then turned and went in the direction of Norton. An inquest was held before Mr. Coroner Deane, at the Bull and Lion Inn, Packington, on the body of the deceased, on Thursday [January 23rd], when the jury returned a verdict that deceased had died from exhaustion through lying in the ditch where she had fallen while drunk."
"Packington"
Ashby-de-la-Zouch Gazette : February 1st 1879 Page 5