Some history on Towcester in the County of Northamptonshire 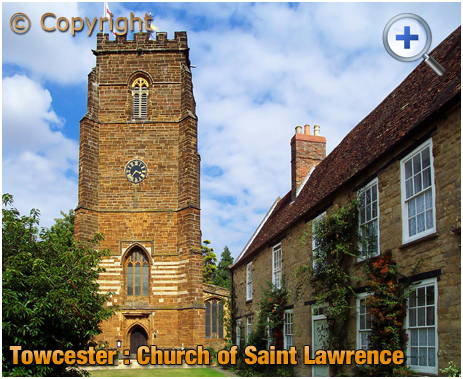 This photograph of the Norman Church of Saint Lawrence at Towcester was taken from Moat Lane with a view of historic cottages to the right. The stone edifice, partly in the Early English style, consists of a chancel, clerestoried nave, aisles, south porch, and a noble embattled western tower with clock. William Sponne, archdeacon of Norfolk, was rector between 1422-48. On the re-pewing of the church in 1835, his tomb was lowered, and on being opened, the skeleton was found in perfect preservation. 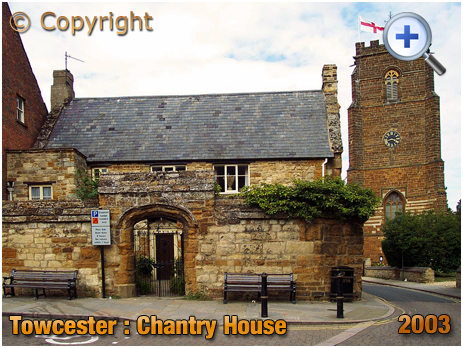 A view of Chantry House on the corner of Towcester's London Road and Chantry Lane. The chantry was founded in 1447 by Archdeacon Sponne, the vicar of Saint Lawrence. It fell to the Crown during the reign of King Edward VI. The building was re-purchased by feoffees of Archdeacon Sponne and became part of the Grammar School in 1552. The house was rebuilt in the mid-1860s. The photograph shows the ridged garden wall and gate arch, both of which date back to the 15th century. 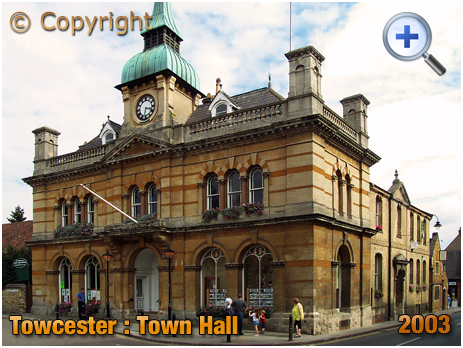 The focal point of the triangular market square, this Italianate building was constructed in 1865 as Towcester Town Hall and Corn Exchange. Costing some £3,000, it was designed by Mr. T. H. Vernon who incorporated a tower and illuminated clock. The local Parish Council were given responsibility of the building in 1983. 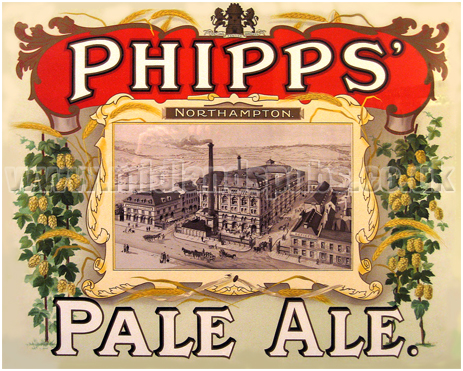 "A 41-years-old railway employed, Albert Williams, of 44, Willis Way, Towcester, appeared at Towcester on Tuesday on four charges of larceny as a servant of the L.M.S. Railway Co. The charges involved the alleged theft of goods to the value of £175, and Williams was also accused of unlawful possession of a firearm. Defendant was represented by Mr. Bernard Tippleston [Messrs. Dennis, Faulkner and Alsop]. Mr. C. E. G. Mumby [Messrs. Becke, Green and Stops] prosecuted. Mr. Tippleston told the magistrates that the fourth charge, involving alleged theft of goods worth £152, had been preferred that day. He wanted a chance to consider this charge with Williams, and asked for a 14 days' adjournment. Mr. Mumby offered no objection. Bail in the sum of £20, with one £20 surety, was allowed."
"Towcester Railman Charge"
Northampton Mercury : October 17th 1947 Page 5