Located on the corner of London Road and Vernon Road, this tavern was formerly called the Bear Inn, though in the 1850s and 1860s the name of the White Bear is recorded. Vernon Road was then called Lake Lane. I suspect that it was re-named after the Vernon family of Park View. 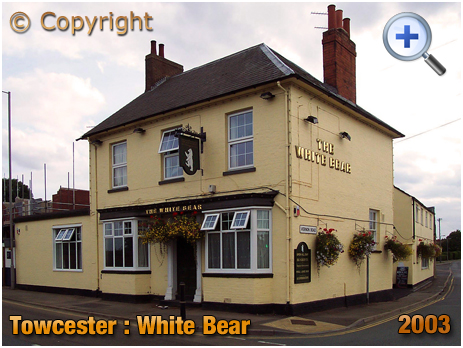 I took this photograph in August 2003. In 2011 the building, following a complete refurbishment costing in the region of £250,000, traded as the Stables Bar and Grill. By 2018 it had become the Olive Tree, a Turkish Mediterranean Restaurant and Bar. The outbuilding were also refurbished for private accommodation.

John and Susanna Wright were running the White Bear Inn during the 1840s. The couple were assisted by two of their nieces, Mary and Sarah Howes. After a lengthy illness, Buckinghamshire-born John Wright died in July 1851 at the age of 48.

In 1861 the pub was run by widower James Allen. He was both owner and occupier of the property. He had previously worked as a carrier - a trade boosted no doubt by the traffic on the old Roman Road passing through Towcester.

Licensees of the White Bear

"A motor car carrying six passengers crashed into the wall of White Bear Inn, Towcester, on Saturday, and overturned, the occupants extricating themselves little the worse for the incident beyond cuts and bruises. A large hole was made in the wall of the public-house, which was also cracked, and the doorstep damaged. The accident was the result of the back wheels of the car skidding in trying to stop in an endeavour to avoid colliding with a greengrocer's cart, and a peculiar feature was that the engine continued running after the impact. The occupier of the premises. Mr. A. D. Course, gave first aid to the occupants, a London family travelling to Birmingham, and they were afterwards attended by Dr. Violet Smith, and proceeded on their journey, while a lorry hauled the car on to its wheels again."
"Car Overturns After a Skid"
Northampton Mercury : September 26th 1924 Page 12