I only have a little information on the Queen's Head Inn, a pub that demands further investigation. Aesthetically, it is a lovely-looking building in which some classical architectural detail was incorporated. I particuarly like the oval window in harmony with the first floor window and its pediment. This is on the corner of Outlaw Lane, an itriguing name which must have some fascinating history. 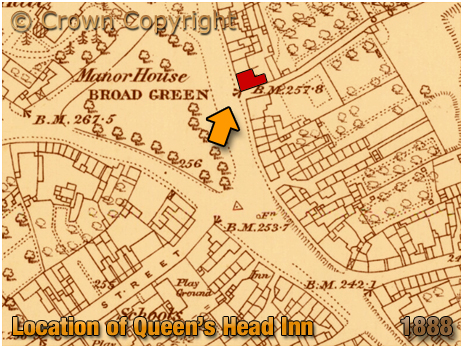 London-born Catherine Laughton was the licensee in 1847. It was in October of that year that the widow married the farmer Francis Kilborn. He took up the position of farm bailiff and the couple moved to Irthlingborough, by which time the Queen's Head Inn was kept by John and Caroline Jeffs.

John Jeffs was a cabinet-maker and plied his trade in Northampton in the early 1850s. He had married Caroline Chapman, second daughter of the aforementioned William Chapman, at All Souls in Langham, Westminster, in May 1844. In this year both of their parents, William Chapman and Thomas Jeffs, were recorded as victuallers.

John Jeffs died aged 44 at the Queen's Head in February 1861 but Caroline remained at the pub with her six children. She was still tenant of the house when the freehold was advertised in 1878. 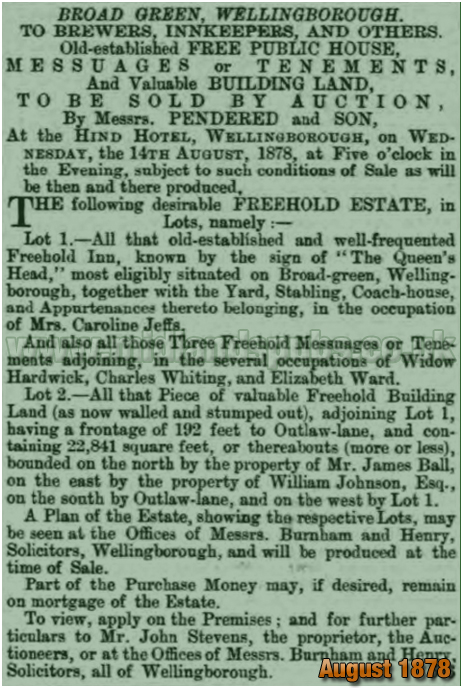 The advertisment for the auction states that the proprietor of the Queen's Head Inn was John Stevens. This was probably the baker who had a business at No.2 Broad Green. The auction was to be held at the Hind Hotel in Wellingborough. Occupiers of adjoining properties were listed - widow Louisa Hardwick was a sick nurse, whilst Charles Whiting was a groom.

Following the sale of the Queen's Head Inn Caroline Jeffs moved to Kilburn House in West Street and the pub was run by the Coles family. Jonathan Cole was recorded as the inn keeper but it was his son Frank and his wife Rose who were running the place. They had married at St. Edmund's Church at Northampton in December 1871. They remained at the Queen's Head Inn until the Edwardian period.

John Herbert Bailey was the licensee of the Queen's Head Inn during the late Edwardian period and remained in charge of the pub until 1943. Born in Raunds in 1882, he was employed for some time as a shoe finisher by the St. Crispin Productive Society Ltd. Prior to moving to the Queen's Head Inn, he had kept the Dolphin Inn at Towcester. He was already a publican when he married Bertha Curtis at Raunds in August 1909. The couple soon moved to the Queen's Head Inn. Bertha died in July 1921 but John Bailey remained at the helm of the pub. His father, Alma Enoch Baily moved into the premises. When he died in January 1931 it was reported that the hand-sewn book maker was one of a rapidly disappearing breed of craftsmen.

John Bailey was very interested in music, and while living at his birth town, he was a keen supporter ol the Raunds Temperance Band. He was also a member of Raunds Conservative Club. His sister, Gertrude Spicer, was a school mistress at Weston Favell Church of England School. During the Second World War John Bailey's health declined and he died aged 61 at Northampton General Hospital in November 1943. His war effort included collections so that gifts or money could be sent to customers of the pub who were serving in the armed forces. 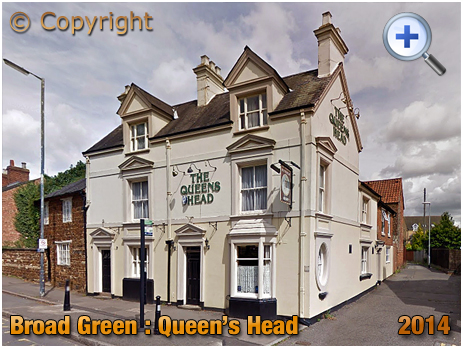 The local lodge of the Royal Antediluvian Order of Buffaloes used to hold meetings at the Queen's Head Inn.

Plans for alterations to the Queen's Head Inn were approved at Wellingborough Magistrates' Court in July 1951.

Licensees of the Queen's Head Inn

"Mr. J. T. Parker, County Coroner, held an inquest at the Queen's Head Inn, Broad Green, Wellingborough, on Monday morning, touching the death of the male infant child of Frederick Tompkins, of Chapman's Passage, Buckwell End, which was found dead in bed by the side of its mother late on Saturday night. Elizabeth Tompkins, the mother, gave evidence that the deceased child was three weeks old, and had been in good health, She retired to bed with him on Saturday night at half-past nine, and at eleven o'clock she saw he was all right. Up to that time he had been lying on her arm, and then, as he was asleep, she took him off. Half an hour afterwards, however, her husband went to bed and called her attention to the child, which was very white. She ran and fetched assistance, and afterwards a doctor was sent for, but the child had then died. Replying to the Coroner witness said that both she and her husband were sober on Saturday night, and she also said that so far as she knew she did not press the child to her. Dr. Watson said that when he was sent for just before one o'clock on Sunday morning the child had been dead more than an hour, and from the appearances his opinion was that the cause of death was suffocation. Frederick Tompkins, the father, also gave evidence, as did Elizabeth Tompkins, sen., after which the Jury returned a verdict of "Accidentally suffocated."
"Child Accidentally Suffocated"
Bicester Herald : September 19th 1902 Page 7