History and Information on Ewelme in the County of Oxfordshire.

The picturesque village of Ewelme, situated amongst the Chiltern foothills, is noted for a fine cluster of 15th-century buildings, comprising a church, almshouses and school. The name of the village derives from Aewhylme, a spring course, which flows down through the village to extensive cress beds dug out in the late 19th century following the mill's destruction by fire.

Ewelme is built on a fairly steep slope to which brick and flint houses cling at all angles, forming an attractive townscape. The medieval Speaker of the House of Commons and Chief Butler of England, Thomas Chaucer, son of the poet, author, philosopher, and astronomer, was once Lord of the Manor. Alice, his only daughter, married William de la Pole, 1st Duke of Suffolk, and the aforementioned buildings are a legacy of their period at Ewelme. However, the family manor house, once an occasional royal residence, has been lost.

The local economy was largely based around agriculture and market gardening, the population growing steadily to around 700 people in 1871, housed in 154 houses. The elongated development of the village is a result of the hilly ground and access to the sweet spring water that flowed down to a mill pond. Considering the relatively low numbers living in Ewelme, the villagers were well served by four taverns in the mid-19th century. 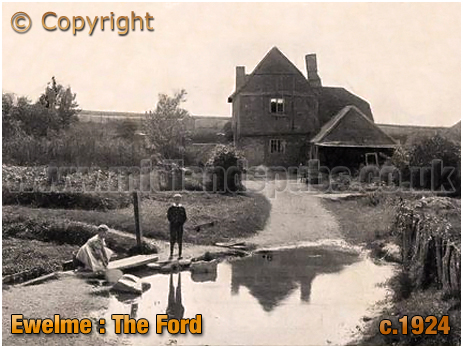 John de Burghersh, together with his wife, held the manor in the early to mid-14th century. She was the daughter and heiress of the Bacon family who held the manors of Swyncombe and Ewelme. Their daughter Matilda [or Maud] married Thomas Chaucer who bought other parts of land around Ewelme to create a park. The couple rebuilt the manor house and it is claimed that they entertained Edward III and John of Gaunt. Indeed, some claim that Thomas Chaucer was actually the son of the 1st Duke of Lancaster.

Thomas and Matilda's daughter Alice was first married at the age of eleven to Sir John Philip and went to live at Donnington Castle. However, he died shortly afterwards. She later married Thomas Montacute, 4th Earl of Salisbury, a commander of the English Army in France under William de la Pole, Earl of Suffolk. Following, the death of Thomas Montacute during the Siege of Orléans, Alice married William de la Pole. Much favoured by King Henry VI, he was created first Marquis and then Duke of Suffolk. 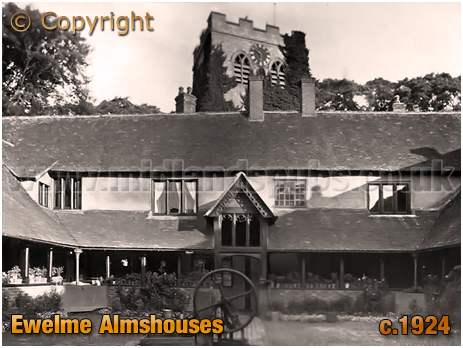 The Duke and Duchess of Suffolk spent a good deal of time in Ewelme and set about creating a 'model village.' In 1437 Henry VI licensed them to build an Almshouse - "God's house in Ewelme" - for 13 poor men and two clerks. The original statute demanded that the inmates, donning a habit, attend daily church services, including Mass and Evensong, and to pray for the souls of their benefactors in the Chapel. The courtyard around which the lodgings are grouped is built of brick, thought to be its first use as a building material in Oxfordshire. Step-gables and herring-bone brickwork suggests that a Flemish architect was resposible for the design of the almshouses. A quadrangle is surrounded by cloisters, central to which is a well. Two rooms were allocated to each inmate.

Dedicated to Saint Mary the Virgin, the church at Ewelme was rebuilt by William and Alice de la Pole. Work on what is regarded as a "splendid Perpendicular building" commenced around 1436, though some improvements to the older structure had been funded by Alice's parents. Some of the former Early English church remains, but the structure is largely 15th century with some later additions.

Built with mixed flint and limestone rubble, the exterior of the church is redolent of East Anglian non-secular architecture. It is thought that William de la Pole may have instructed the architect to fashion the building on that of Saint Andrew's at Wingfield in Suffolk, another Manor held by him and where, indeed, he was buried. The squat tower has been dated to around 1432 and is from the older church. The red-brick battlements used here are a feature of the tower in Wingfield. 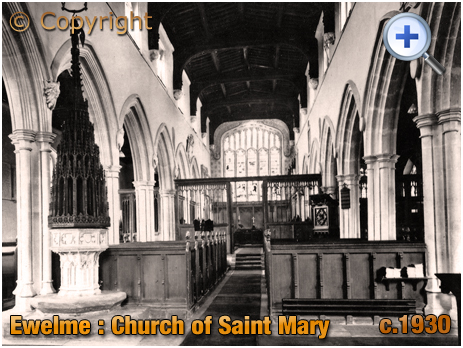 The interior of Saint Mary the Virgin is particularly noted for the Alabaster chest tomb to Alice, Duchess of Suffolk who died in 1475. The remarkable craftmanship of the alabaster is such that some consider it may be the work of Pietro Torrigiano, the Italian sculptor of the Florentine school. The head of Alice de la Pole, who lived to the age of 71, rests on a pillow, under a canopy supported by two angels. Women tended to have a small dog carved next to the feet but here there is a lion, suggesting that she enjoyed much status.

There is much to engage the visitor at the church, particularly the rare Rood-Screen, a monument to Michael de la Pole, who was killed at Agincourt, and, in the churchyard, the grave of the English writer and humorist, Jerome K. Jerome, who lived nearby at Gould's Grove. 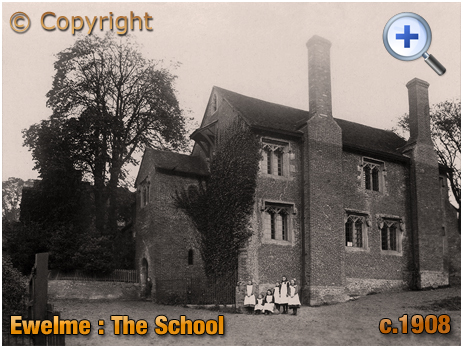 The third in the cluster of 15th century buildings is the School, originally founded as a Grammar School with the first teacher being mentioned in the late 1440s. Today, the building serves as the oldest school building in the country to be in use as a state primary school. One of the classes is taught in the original school building, which also houses the school hall.

If you have a genealogy story or query regarding Ewelme you can contact me and I will post it here in addition to including your message within the website pages for Oxfordshire Genealogy.

If you would like to share any further information on Ewelme - perhaps you drank in one of the pubs in the past? Or maybe knew a previous publican running one of the boozers? Whatever the reason it would be great to hear of your stories or gossip. Simply send a message and I will post it here.

"The Rectory of Ewelme, vacant by the death of the Rev. Greville Phillimore, has been offered by Mr. Gladstone to, and has been accepted by, the Rev. Henry Walford, M.A., Wadham College, Oxford. Mr. Walford has been for 21 years one of the assistant masters at Haileybury College. He was previously Vice-Principal and tutor of St. Edmund Hall, Oxford, and was a Select Preacher in 1865-6. He has executed several translations for the Oxford Library of the Fathers, and latterly assisted in the editing of the same. The rectory of Ewelme, which was till recently attached to the Regius Professorship of Ecclesiastical History at Oxford, valued at 550/. with a residence."
"The Rectory of Ewelme"
Reading Mercury : March 1st 1884 Page 4

"At the Watlington Petty Sessions on the 16th ult., before the Earl of Macclesfield and other magistrates, Harriet Plumridge, housekeeper to Mr. George Eyre, solicitor, Ewelme, was charged with having been drunk and disorderly at Ewelme, on the 6th ult. Mr. G. F. Slade, solicitor, Wallingford, defended. It appeared from the evidence in the case, and in several others connected with the same disturbance which were afterwards heard, that on the evening in question two men named Edwards and Moody, employed by Mr. Eyre, were carrying to Mr. Eyre's house some wood, the ownership of which was disputed. A man named Edward Munday, employed by Mr. Bryant, from whose premises the wood had been removed, said to some bystanders that Edwards and Moody "were fetching the wood again," whereupon the two latter violently assaulted him, knocking him down and throwing him into hedge. James Warner, a gardener, of Ewelme, and Moses Winfield, the parish constable, who interfered, were also assaulted, and the disturbance became general, some 50 persons collecting in front of Mr. Eyre's house. Meanwhile the defendant Plumridge, who had been at Wallingford, and was apparently intoxicated, was driven up the street in a trap, and on seeing the crowd became very excited, and stood up in the trap haranguing the people. She also interfered with the parish constable and P.C. Collett while they were taking some of the disturbers into custody, taking off the constables' hats and beating them about their heads. Mr. Slade, for the defence, contended that defendant was not drunk, but that she was hysterical, and excited by seeing the two men knocked about. Defendant was convicted, and fined £1., and 14s. 3d. costs. William Edwards, of Ewelme, and John Moody, of Wallingford, the men employed by Mr. Eyre, whose proceedings had led to the disturbance, were then charged with assaulting Raymond Munday, and also with assaulting James Warner. William Edwards was further charged with assaulting Moses Winfield, the parish constable. There were cross-summonses charging James Warner with assaulting Edwards, and five other young men with assaulting Edwards and Moody. The Bench, after hearing the evidence, sentenced Edwards to two months' imprisonment for each of the three assaults he was charged with [six months in all], and Moody to two months' imprisonment for the assault on Munday, and one month for the assault on Warner. All the other cases were dismissed. The Court was crowded during the hearing of the cases."
"Disturbances at Ewelme"
Reading Mercury : March 1st 1884 Page 4