Some history of the Shepherd's Hut at Ewelme in Oxfordshire

The Shepherd's Hut stands on the junction of Ewelme's High Street and Eyre's Lane. The pub is across the road from the Ewelme Watercress Beds and Local Nature Reserve. It is important to emphasise this as the former beer house was intertwined with the watercress business for many years. 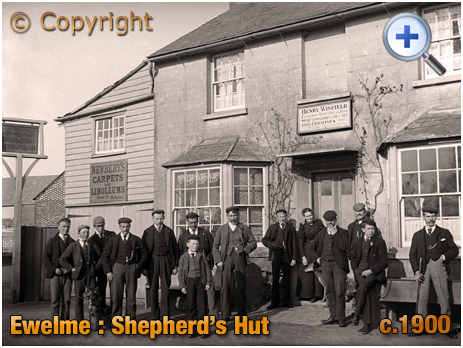 This lovely photograph of the Shepherd's Hut was taken around 1900 and shows a group of men and a couple of boys outside the pub. Oh, nearly forgot the pair of dogs too! I think this may be a gathering of villagers on a wedding day - some seem to have flowers in their buttonholes. The frontage of the main building has changed little since this period. The wooden garage-cum-warehouse to the left of the pub has long gone. On this part of the structure there is a sign for Newbury's Carpets and Linoleums of Friar Street in Reading. 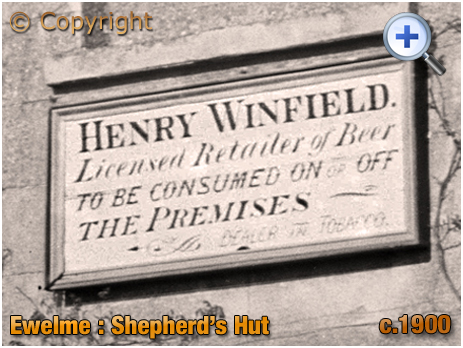 The name above the front door of the Shepherd's Hut at the time of this photograph was Henry Winfield. The son of an agricultural labourer, he was born in the parish in December 1870. He grew up not far from the Shepherd's Hut but, as a young man, moved to the north-east at Kingston Blount, near Aston Rowant, in order to find work. On Boxing Day 1896 he married Sarah Ann Coles at Saint Mary's Church in Ewelme. When the couple tied the knot Sarah Coles was recorded as an innkeeper. Her uncle, Joseph Coles, had earlier kept the Shepherd's Hut so it would seem she came to the pub through the family. 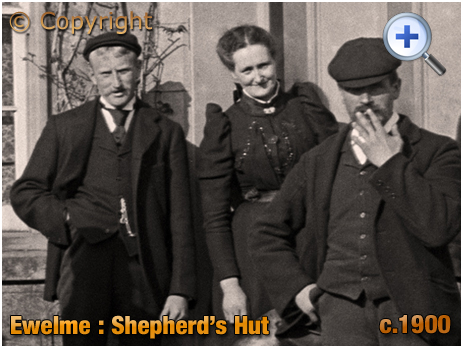 I suspect that this is Sarah Winfield, landlady of the Shepherd's Hut, standing near the front door of the pub in this photograph. One of the men in the photograph may be licensee Henry Winfield. Despite having his name above the front door, Henry probably left the running of the Shepherd's Hut to Sarah whilst he focused on his work nearby. Recorded as a watercress cutter, he was a foreman for the business operated by George Smith. This work may have been seasonal, though the maintenance work was conducted throughout the calendar. 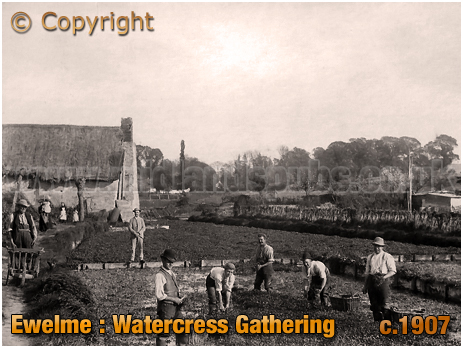 George Smith, owner of the watercress beds, was also a publican. He kept the Salisbury Arms at South Weston, a pub no doubt frequented by Henry Winfield when he lived at nearby Aston Rowant. Indeed, he may have worked for the Smith family during that period in his life. Following the fire of the old mill in 1886, George Smith bought land and cottages at Ewelme with the intention of creating watercress beds in the stream that flowed down to the mill pond. This must have been quite an undertaking and he and his brother Robert no doubt employed many men with shovels to dig the soil to create 39 levels, each being about 25 yards in length. It was the brother Robert Smith who managed the watercress beds once they were established.

The watercress beds proved to be an important part of the local economy. The watercress was harvested and transported to the railway station at Watlington where it was despatched to London and the Midlands. The cress grown here was highly regarded and sold well at Covent Garden. Good trade links were also established with the markets at Birmingham and Wolverhampton. The cress was also sold as far north as Manchester. The Smith family operated the watercress beds until the mid-1960s when the business was acquired by James Chavasse and Ken Austin. They continued the business until 1988 but declining sales led to the site's closure. The waterbeds soon began to be overgrown by weeds but a restoration programme was started by Des Dix. Some years later the villagers formed an informal support group and, through the Chiltern Society, the beds are maintained as an ongoing conservation project.

With the pub being a little out of the village, almost all of the Victorian customers were no doubt involved in some form of agricultural work. Indeed, the name of the house suggests that livestock was a key component of the surrounding fields. In 1841 the census enumerator divided the parish into two halves, with the Sheep Brook being the demarcation point. The pub had operated for half-a-century prior to the creation of the watercress beds and the name of the house possibly found favour with those working in the fields. There were quite a number of individuals recorded as shepherds in this early census.

An early reference to the beer house appears in the 1847 Post Office Directory in which John Glanville is listed as a beer retailer at The Shepherd. Another beer retailer named George Glanville is also listed in the village. This was possibly the Coach and Horses, a name that appears in the 1861 census when Thomas Brookland [Bruckland] was recorded as the licensee. In 1847 the two fully-licensed public-houses at Ewelme were the Lamb Inn, run by the carrier Joseph Bond, and the Greyhound Inn kept by the butcher Thomas Garlick.

In 1851 the pub is simply listed as The Shepherd when John Glanville was recorded as the head of the household. Born in the parish in 1808, he was also a journeyman carpenter so no doubt his wife Elizabeth kept the pub during periods when he was at work. During the 1850s the couple's daughter, also named Elizabeth, took over the pub and also operated a shop here on the corner. Her parents remained on the premises, John Glanville becoming a master carpenter and joiner. There are probably a number of houses in the locality in which he was involved with the repair of timbers.

Elizabeth Glanville married Joseph Lewendon in May 1861 and, as was the custom in those days, he became the licensee. However, he continued in his trade as a master tailor so perhaps was publican in name only. At around the same time the nearby bakery had changed hands and, after being run by the Hathaway family for many years, was now kept by Michael Higgins.

Joseph and Elizabeth Lewendon later moved to Tilehurst in Berkshire where he continued to work as a tailor. However, the couple seemingly couldn't resist retailing and took over a post office. 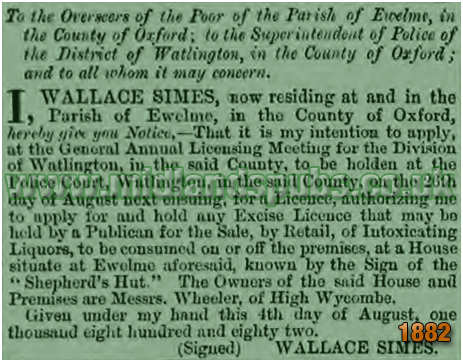 Sussex-born Wallace Simes held the licence in early 1880s. From the notice above, it would seem that Wallace Simes attempted to elevate the status of the Shepherd's Hut by applying for a full licence in 1882. As records show that the business remained as a beer house he was clearly unsuccessful when facing the Licensing Justices. Wallace Simes had previously worked on the farm at Tilehurst run by his parents Joshua and Mary. As a widow, his mother came with him to Ewelme. However, they moved to Horton in Buckinghamshire where Wallace Simes worked as a gamekeeper. This brings us up to the period when the aforementioned Joseph Coles became the publican of the Shepherd's Hut.

Edward Field was granted the licence of the Shepherd's Hut at the Petty Sessions on November 21st 1903. He kept the beer house with his wife Francis. The couple had lived for a number of years in Aldershot where Edward worked as a cellarman. Perhaps he was seeking some daylight! With his background, one should imagine that he knew how to keep beer.

Former Royal Marine Joseph Strevens was the publican of the Shepherd's Hut throughout the 1930s and at the outbreak of World War Two. The Welshman kept the pub with his wife Marie. They applied for a full licence in January 1931 but I am not sure if they were successful at this particular point. The couple had married in 1914 at Alverstoke in Hampshire.

Joseph and Marie Strevens were were tenants of Messrs. Dymore Brown and Son Limited of the Royal Albert Brewery in Reading. This firm was registered in May 1902 to acquire the business of James Dymore and Son, a brewery that had been founded in 1820. The Royal Albert Brewery was built in 1864. Curiously, this couple were recorded as tenants for this brewery a few years after the business had been taken over by Morland & Co. Ltd of Abingdon. The existing agreements must have been carried over, or the Reading brewery enjoyed a period of autonomy after the takeover. Morland would eventually be taken over by Greene King in 1999 which explains the livery of the building in the 21st century. Publican Joseph Strevens died in 1944, aged 69.

Licensees of the Shepherd's Hut 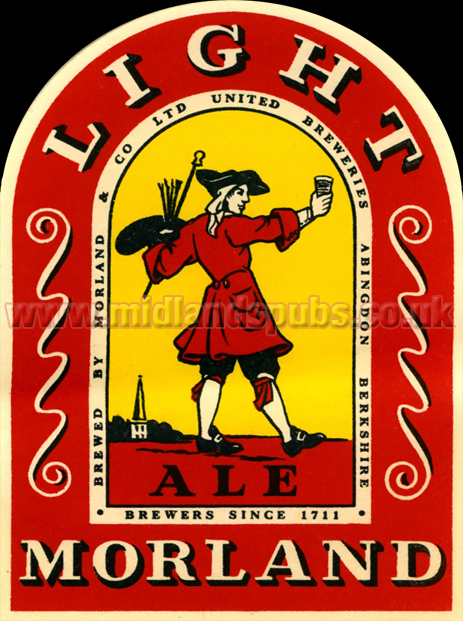 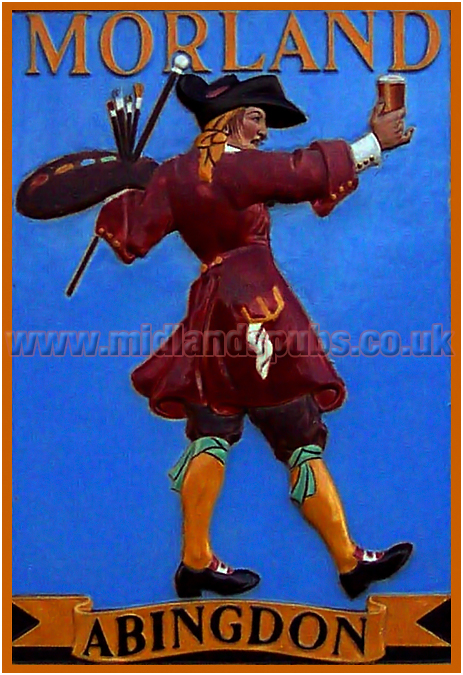 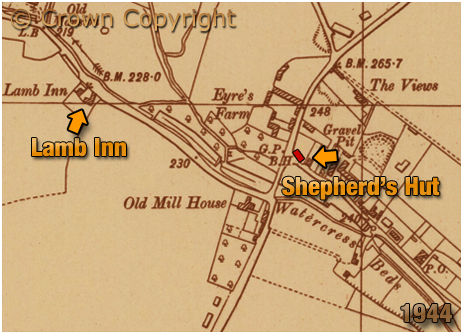 I have highlighted the location of the Shepherd's Hut on this map extract dated 1944. Note the watercress beds close to the pub's location. The Lamb Inn is a short distance away on the road to Fifield and Benson. Roman coins have been found close to the road between these two places. The Old Mill House is marked - the mill was ruined by fire in 1886. Notice also Eyre's Farm. This building made the newspapers in March 1884 when a mass brawl took place outside, fuelled possibly by a few jars of ale in the Shepherd's Hut. Click here to read about this disturbance outside Eyre's Farm. 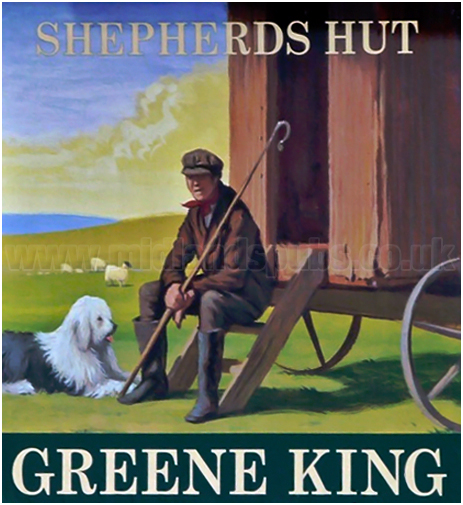 In recent times, the pub has traditionally featured an inn sign with a shepherd taking a break along with his faithful dog at his feet. The Shepherd's Hut - or van - became increasingly widespread during the middle of the 19th century, particularly following the Inclosure Acts. This government legislation created large farm operations on which shepherds would be employed to look after extensive flocks. The hut was not simply a place to take a break or, in some cases, to live - though it no doubt offered welcome shelter in poor weather conditions. The van would be used to tend to new-born lambs that needed nurturing. The hut also played an important role during sheep shearing. Arguably the most famous shepherd's hut is the one that belonged to Gabriel Oak in Thomas Hardy's "Far From The Madding Crowd.' Of course, in the 21st century the shepherd's hut has become something of a desirable or must-have garden feature for the middle-classes. Former Prime Minister David Cameron paid £16,000 to have one installed in his back garden. This might be acceptable if he had strived to help the homeless by passing some legislation in order to relieve their plight.

"At Watlington Police Court, William Smith, Henry Winfield, Frederick Weston and John Keen, all of Ewelme, were summoned for damaging a notice board on Ewelme Common, the property of the Parish Council, on June 30th. Defendants pleaded guilty. Mr. Belford, solicitor, appeared to prosecute and produced the broken board, the replacing of which would cost 10s. Mr. Bulford did not wish to press the charge, but wanted defendants to promise not to damage the Council's property again. All promised but Smith, who who was fined 5s. with 2s. 6d. costs, and 2s. 6d. damages, while the others were each fined 6d., with 2s. 6d. costs, and 2s. 6d. damage."
"Damaging Parish Property"
Henley Advertiser : August 3rd 1895 Page 8

"While cycling on Saturday evening near the Huntercombe golf links, C. Strevens, a son of the landlord of The Shepherd's Hut, Ewelme, and a pupil at the Wallingford County Grammar School, was involved in a collision with a motor-cycle driven by Mr. S. Large, of Nuffield. Strevens was taken to the Wallingford Hospital by the Wallingford and District Ambulance after a doctor, who happened to be in the vicinity, had seen him. He suffered severely from shock and was in great pain."
"Grammar School Pupil Injured"
Berks and Oxon Advertiser : August 23rd 1929 Page 8