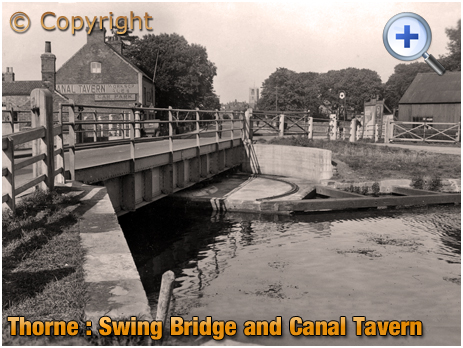 This inter-war photograph shows the old swing-bridge at Thorne that used to carry traffic across the Stainforth & Keadby Canal. A swing-bridge for pedestrians is still in use but the road is now carried by an elevated bridge. The pedestrianised crossing is called Princess Royal Footbridge and was opened by Princess Anne in October 2005. The swing-bridge seen here was installed in 1925 to accommodate heavy traffic. Those travelling on the canal were not pleased as it took longer to open and close the new swing-bridge. Apparently it took four minutes to open and another four minutes to close the bridge. The old one took only half-a-minute. It was hoped that by using electricity they could halve the time it took to manually open the bridge. The modern road bridge has completely spoiled the view from the Canal Tavern where patrons can only see concrete and steel. Still, at least the pub was still going in the 21st century. In this photograph the tavern features the livery of the Worksop & Retford Brewery Co. Ltd., a firm acquired by Tennant Brothers Ltd. in 1959 by which time the brewery operated an estate of 192 public-houses. 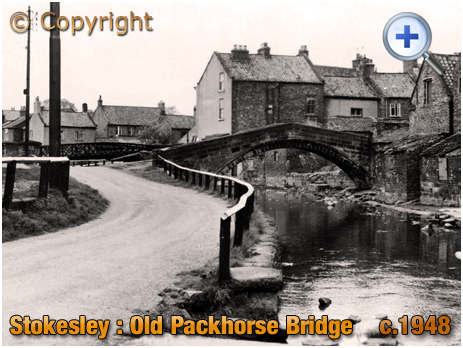 Probably a replacement for an older structure, the Old Packhorse Bridge at Stokesley dates from the late 17th or very early 18th century. Plenty of modern housing has been erected on the banks of the River Leven, though the tall building in the centre still stands and in recent times has been the premises of the Panda Chinese Restaurant at No.9 Bridge Road. The narrow path over the Packhorse Bridge runs alongside the Queen's Head Inn and directly into the High Street and old Market Place. The packhorse route was an ancient way from Durham to Helmsley with Stokesley being a key market town en-route. Typically, a train of horses would carry all manner of goods from food to timber. Despite the introduction of toll roads, the old lags would avoid fees by continuing to use their old routes. 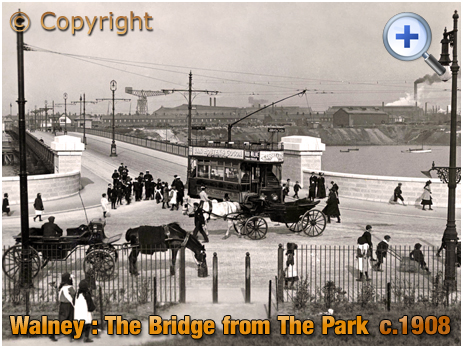 Taken from an elevated position in Vickerstown Park, this photograph shows the new bridge connecting Walney Island with the mainland of Barrow-in-Furness. Officially it is the Jubilee Bridge but is widely called Walney Bridge. It would seem that this photograph was taken as last minute work on the overhead tram wires was being completed. The bascule bridge officially opened on July 30th, 1908, and provided a convenient method of crossing the Walney Channel by residents of the model village of Vickerstown. They had previously used the ferry service which had proved inadequate with the large increase in the population stimulated by the Vickers Shipyard. The company helped with the costs of the bridge and was eventually repaid by the use of tolls until 1935. This was the year when the bridge was designated the Jubilee Bridge as it marked the silver jubilee of King George V. 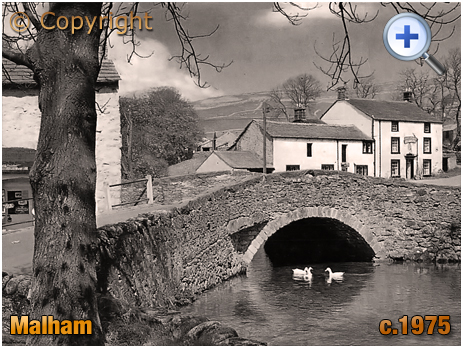 This packhorse crossing of Malham Beck is known as 'New Bridge' but when it was new I am not sure. When it was designated a listed building in 1988, it was described as an 18th century bridge of stone and rubble. This view was captured from the west side of the beck and shows the small shop on the left and the Lister Arms Hotel, an inn sign commemorating Thomas Lister, landowner and politician who presented Clitheroe in the House of Commons from 1713 to 1745. 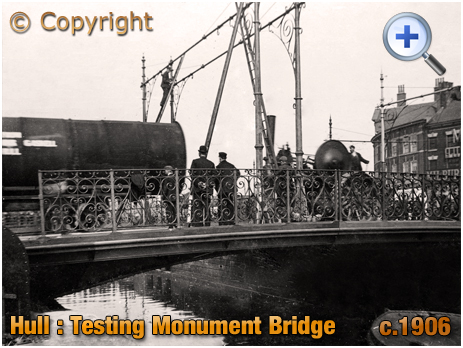 In this photograph a whole load of weight is being place on the 'New' Monument Bridge at Kingston upon Hull before it was deemed safe to open to the public. At the same time an engineer is working on the overhead system for the trams that were due to travel over the widened bridge. The bridge was named after the William Wilberforce Monument and located close to the site of the ancient Beverley Gate, one of the gates leading into the city where King Charles the First was refused admission by the sturdy Parliamentarians of the city. Erected over the connecting channel between Prince's and Queen's Dock, the new bridge replaced an earlier double-leaf bascule bridge. The increase in traffic, combined with the introduction of tram services, demanded a bridge of increased strength and width. Much to the anger of local businesses, the work was rather protracted. Indeed, in March 1906 a competition was launched in which the public could try to guess the date on which the bridge would finally be opened. The Queen's Dock was infilled in 1931, thus enabling a new roadway. Consequently, Monument Bridge was dismantled and removed at the end of 1932. The William Wilberforce Monument was also moved to the eastern end of Queen's Gardens. 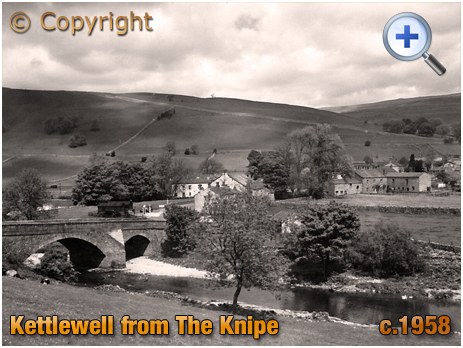 This photograph of Kettlewell was taken from The Knipe, an elevated position on Gate Cote Scar. The view shows the bridge spanning the River Wharf and Cam Head rising up beyond the village. The ashlar and rubble stone bridge dates from the late 18th century. Tenders for the widening and rebuilding of the old bridge were invited in May 1781. The bridge was fortified following the terrible floods of 1883. This was probably when the south side was widened. 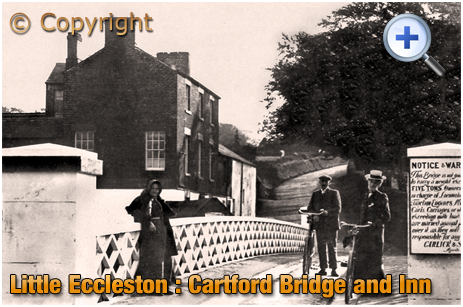 I cycled over this bridge in 2018, calling into the Cartford Inn, the building seen here on the other side of the bridge. Following the death of his gamekeeper and dairyman, the Squire of Rawcliffe Hall ordered the construction of Cartford Bridge in 1831. This remains a toll crossing, the toll house being on the northern side of the river. We were charged 20p for our bicycles. A local journalist wrote in 1942 that "that fine lashing lass with the fair hair takes my coppers. She is very pleasant to look at, and she always smiles," prose that would land him in trouble if he typed that in the 21st century. 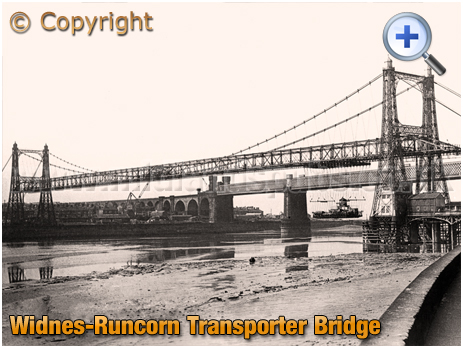 An inter-war view of the Widnes-Runcorn Transporter Bridge that spanned the River Mersey and Manchester Ship Canal. Opened in 1905, the bridge was operated until July 1961 when it was replaced by the Silver Jubilee Bridge. Although later demolished, the former approaches to the structure are still visible on both sides. Crossings were made on a transporter car that, when the bridge opened in 1905, measured 55 feet in length and was designed to carry 4 two-horse farm waggons and 300 passengers. The car was operated by a driver in a cabin at the top of the car, enabling vision in all directions. 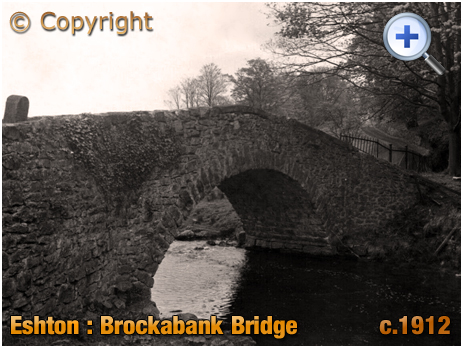 A key role of the Brockabank Bridge at Eshton was to carry traffic connected to the nearby limestone quarry. There was once a limekiln close to the bridge, remains of which can still be seen today. The track over the bridge also served Brockabank Farm not far from Eshton Beck. Also nearby is Saint Helen's Well, from which water spills into a rectangular stone basin, the overflow being Eshton Beck.