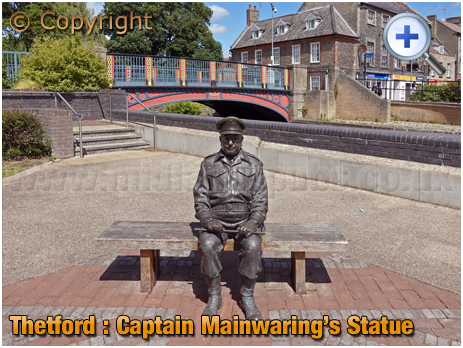 Sculpted by Sean Hedges-Quinn, the statue of Dad's Army character Captain Mainwaring was unveiled on June 19th, 2010 near the River Little Ouse at Thetford. Although the television programme was set in the fictional Walmington-on-Sea, many scenes were filmed in and around Thetford. Indeed, the very first scene of the first episode was filmed close to the site of this statue in the Anchor Hotel. Captain Mainwaring, a central character in the BBC comedy, was played by Arthur Lowe. Although having acted in Coronation Street for some years, it was his role as bank manager and army captain for which he became known throughout the UK and beyond. During the war he had served in the Middle East after being transferred to the Corps of Royal Electrical and Mechanical Engineers. In the background of the photograph is Thetford Town Bridge, a structure cast in 1829 at the nearby St. Nicholas Works of Charles Burrell and Sons. The bridge has a decorative cast-iron balustrade with seven lattice stiles at intervals. In 1964 the bridge had to be reinforced with concrete but this work was well concealed underneath. 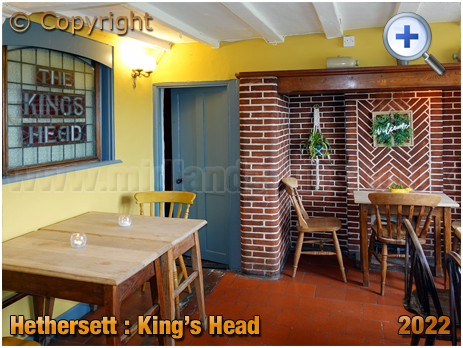 As we were cycling from Ely to Norwich in June 2022, I was looking forward to seeing the snug of the King's Head at Hethersett as I had read about it, and seen images on the excellent CAMRA Pub Heritage website on which it stated "an 18th-century pub which is worth visiting for the absolute gem of a snug on the right." Consequently, I was a little sad to see that the room had been updated. Still, at least the old leaded-window, brick fireplace and quarry-tiled floor are still there to be appreciated. The rest of the interior has been modernised and is of little interest to those who like a traditional or historic setting. Sadly, the beer wasn't up to scratch either. They served the worst example of Dark Star Hophead I have ever tasted. The Oakham Inferno had to be fetched from the cellar as the beer engine was broken! Still, it was not too far to cycle to the Fat Cat at Norwich where all would be well with the world. 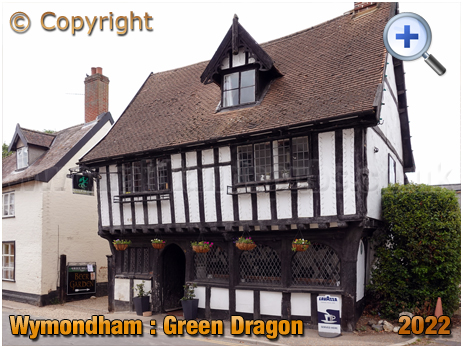 The Green Dragon was one of the few buildings that survived the Great Fire of Wymondham of 1615 and, consequently, the 15th-century timber-framed structure remains one of the oldest pubs in the country. The interior contains much of historic interest, though the brewery operating the house meddled with the place during the inter-war years. When taken over by a pubco the interior's integrity was once again despoiled in 1993. Up until that point the Green Dragon boasted one of the most significant pub interiors in Norfolk. The building is probably mid-15th century, though some believe it could be slightly older. 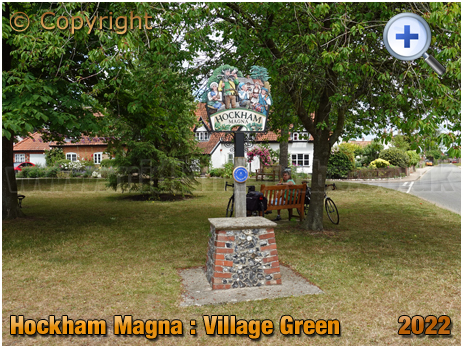 During a cycle ride from Ely to Norwich, we rolled through the pretty village of Hockham Magna, or Great Hockham, and the small green looked a nice spot to enjoy our nosebags. It is an attractive picture postcard setting where one is surrounded by old cottages and well-kept gardens. The green was once the site of a market and fair granted by King Henry III in 1272. Discovered in the 19th century, there is a large boulder on the village green and it is a tradition of the locals to turn this on special occasions. Taking a considerable amount of effort, it had recently been turned for the Diamond Jubilee of Queen Elizabeth II. In the foreground of the photograph is the village sign which looked as though it had recently been restored. The front of the sign commemorates the Hockham Magna Horn Fair, whilst the reverse shows Joseph Ashton, a local resident who was dubbed Tinker Joe. Born in was born in 1769, nine years after the accession of King George II, he died at the grand old age of 112 in 1881. The building in the background is the former Red Lion Inn, a tavern that was licensed in the 18th century but closed in the early 1970s. 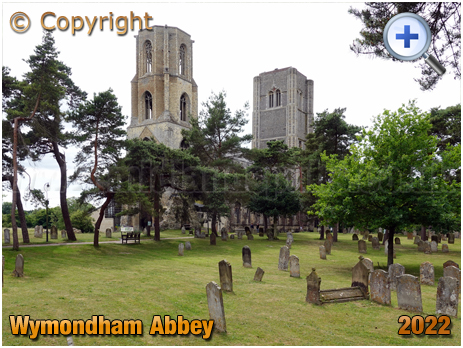 The Abbey Church at Wymondham was founded in 1174 by the Anglo-French baron and administrator William d'Aubigny who was once Chief Butler to King Henry I. Although it started as a Benedictine priory, it also served the parishioners of Wymondham. The building once had a tall octagonal tower holding the bells of the monks but this is now in ruins. Work on a second tower commenced in the mid-15th century to hold the bells of the local townsfolk.