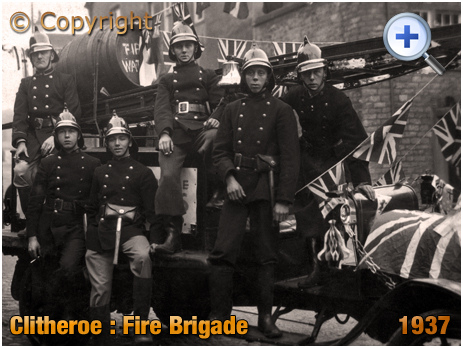 This image shows men of Clitheroe Fire Brigade during the 1937 Coronation celebrations. The whole country went bunting and street party crazy on May 12th to celebrate the crowning of King George VI. The brigade had not long ordered a new Leyland FK6 fire engine, fitted with a pump capable of directing 500-700 gallons of water per minute. However, it would appear to my untrained eye that the men are aboard the older engine. In the evening of the celebratory day the brigade would have been in attendance at Pendle Hill where huge piles of brushwood, motor tyres, barrels and discarded oil cloth formed the materials for a beacon fire to mark the coronation. A newspaper reported that "the fire formed an impressive spectacle as it blazed on top of the hill above Wellsprings and lasted for several hours." 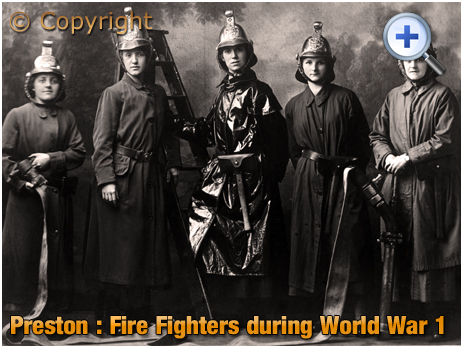 Here we see five women working as fire fighters at Preston during World War One. It is a studio shot and perhaps used for publicity purposes. Sadly, no names are written on the rear of the photograph. It is well known that the south of England had women's fire brigades during World War One but less is known about the north. It is possible that these women had volunteered for a private fire brigade or one dedicated to a specific manufactory. It was in World War 2 that thousands of women were recruited for the Auxiliary Fire Service. Speaking at Preston in 1916, the Rev. F. E. Hutchinson, vicar of Leyland, said that "the chances of the young women today would be greater than those of the women of all the generations before them. They might have a direct vote the government of the country, and, whether they did or not, their influence would be greater than ever before. Women in the present crisis had set themselves new tasks, and proved themselves fit for them. Although some of the work they had taken up was not specially women's work, and would have pass into other hands, more and more avenues for service were opening out to them, and they were not only proving themselves capable but happy in that service. The part they were playing in national service was too good to dropped after the war, and the love of country which the war had stimulated should be after the war, no less than during the war, a powerful and sacred motive."