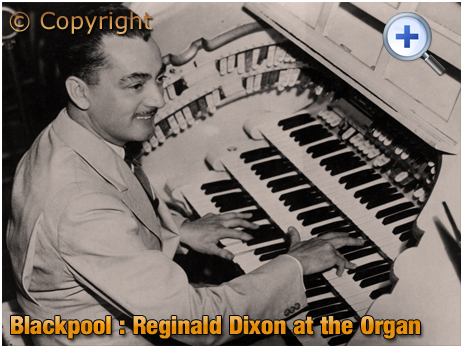 Reginald Dixon was the organist at the Tower Ballroom in Blackpool between 1930 and 1970 making him something of a Mr. Blackpool. He was born in Born in 1904 at Ecclesall near Sheffield, he was tinkling piano keys by the age of two. He took up lessons on a church organ in his early teens and was appointed organist at Birley Carr Methodist Church. Bt the age of 17 he was awarded Associate of the Royal College of Music. The golden age of cinema lured him to become an organist at Stocksbridge and Chesterfield before moving to the Midlands to play on Wurlitzer organs. In March 1930 he became organist at Blackpool's Tower Ballroom and within weeks the BBC were broadcasting his astonishing performances. By 1952 Dixon had made over 1,000 broadcasts, interrupted by the Second World War during which he served in the Royal Air Force. Thousands flocked to the Tower Ballroom to dance to the sound of Reginald Dixon at the organ, whilst thousands more just came to watch.