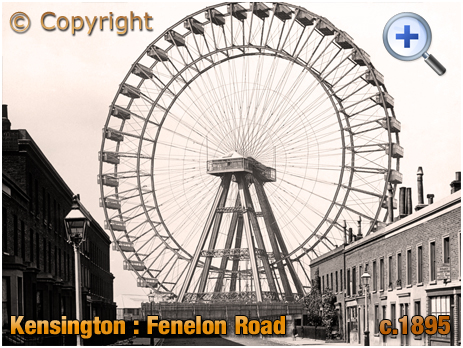 Dating from around 1895, this photograph is looking south-west along Fenelon Road in Kensington and shows the Great Wheel erected in the exhibition grounds of Earl's Court. Dubbed the Gigantic Wheel, this attraction was constructed for the Empire of India Exhibition organised by Imre Kiralfy and held in the summer of 1895. Modelled on the Ferris Wheel used at the World's Columbian Exposition in Chicago two years earlier, it was designed by James Weir Graydon, a former naval officer. He went on to build more wheels at Paris and Vienna, the latter featuring in the classic film "The Third Man." Weighing over 1,000 tons, the Earl's Court wheel, constructed by Maudslay, Sons and Field at Greenwich, was larger than the Chicago design. Two fifty horsepower steam engines were used to rotate the wheel which could accommodate an incredible 1,600 passengers. The 40 cars of the Great Wheel carried over 2.5 million passengers before it was dismantled in 1906-7 but Graydon's Paris wheel survived until 1937 and the famous 'Riesenrad' at Vienna is still in operation.

There was already a fence of railway sleepers at the end of Fenelon Road, separating the thoroughfare from the West London Extension Railway. However, on the other side of the tracks massive fencing was erected so that patrons of the exhibition could not see some the working class housing which, though multi-occupancy, were overcrowded. The thoroughfare was laid out not long after the Crimean War and, consequently, was originally named Alma Road. The buildings on the north side were the earliest properties to be erected and named Alma Cottages. The street was renamed Fenelon Road by 1871. In this view there are signs for two building contractors who once traded from this thoroughfare. On the north side there is a sign for G. S. Corringe, a builder and shop-fitter who also had premises on Avenue Road in Acton. Almost opposite was the premises of George Moyes. His sign stated he was a builder and decorator who also undertook sanitary work.

The housing seen here on both sides of Fenelon Road were demolished shortly before the Second World War as part of a road-widening scheme which was to carry West Cromwell Road over the railway lines.