Photographs, Negatives, Slides and Plates of Pubs and Inns 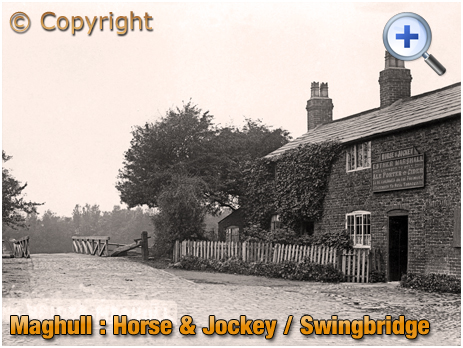 This Edwardian photograph shows Maghull Hall Bridge, a swing-bridge on the Leeds & Liverpool Canal. There were two public-houses close to the bridge - the Travellers' Rest and this building, an old beer house called the Horse and Jockey. At the time of this photograph the licence was held by Esther Marshall. Her husband William was the steam engine driver for the bridge. This section of the canal was completed by 1774 and facilitated new industry in the area, notably quarrying of sandstone. The name of this beer house celebrated horse racing which took place at Maghull in the early 19th century. Old Racecourse Farm was further along Hall Lane. Maghull is also close to Aintree, home of the Grand National steeplechase.

A horse-drawn charabanc is parked up outside the New Bridge Inn at Newhaven around 1900. There appears to be two groups posing for the photographer - the smartly-dressed men are probably about to clamber into the charabanc which has a sun canopy. The rest of the men are in their working clobber and probably taking a break from supping ale to pose for the photograph. At the time of this photograph the pub was kept by the Richardson family and operated by Tamplin & Sons Limited, a company based at the Phoenix Brewery at Waterloo Street in Brighton. 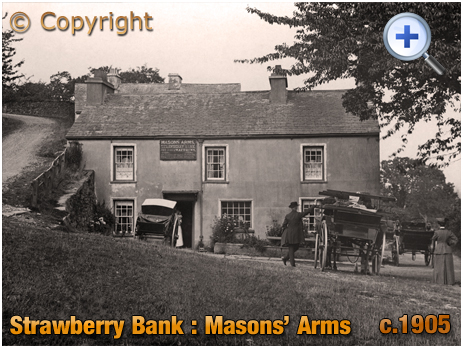 The Masons' Arms remains a popular destination pub in the 21st century. Outdoor seating now dominates the front of the building. The historic tavern nestles on the steep climb up Fell Foot Brow, a lane that heads to the southern end of Lake Windermere from Bowland Bridge, the latter being just across the county border delineated by the River Winster. Trade at the inn was largely from those travelling up the zigzag, part of an old packhorse route from Kendal to the Furness area which was upgraded to a Turnpike in 1763. This is possibly the period when the tavern came into existence. The photographer was stood on Smithy Lane. The track to the right of the tavern led to Hollins Wood and onwards to Great Hartbarrow. Here a couple of traps are parked outside whilst the passengers are enjoying refreshments and perhaps a lunch at the Masons' Arms. The name above the door is that of John James Matthews. He succeeded his parents, Robert and Alverella, who had kept the Masons' Arms for many years during the Victorian era. Indeed, the Masons' Arms was his life - born in 1870, he had grown up in the pub, run it with his wife Elizabeth and was still publican during the Second World War. The publican, who had lived through such historic times, died in June 1947. When I visited this pub it was run by Helen Walsh. Indeed, I believe she and her husband kept the Masons' Arms for around 23 years before selling in 2002. The couple had for many years produced their own fruit-laced beers and spirits. 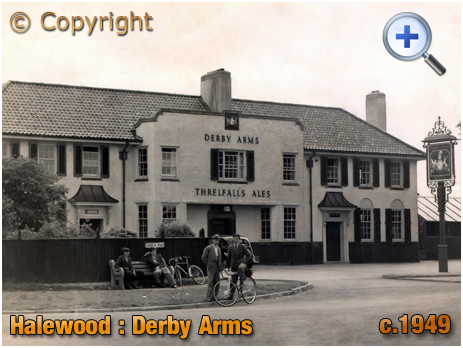 An apartment block now stands on the site of the Derby Arms, once regarded as a landmark public-house at Halewood. The Liverpool-based Threlfall's Brewery Co. Ltd. applied for permission to rebuild the centuries old Derby Arms in the 'modern' style during the Widnes Sessions held on January 3rd, 1935. Superintendent McCrone had inspected the plans which met his approval and the application went through. Subsequently, the historic pub was replaced by this building before the Second World War. Here a group of boys with bicycles can be seen in front of the Derby Arms. From early cycling days the old tavern was a popular meeting place for cycling clubs such as the Combine Winter Cycling Club. The Liverpool branch of the Cyclists' Touring Club also held their field day in the grounds of the old house. 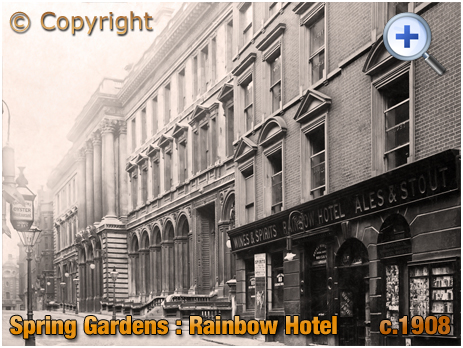 This view of Spring Gardens in Manchester was captured from the northern end of the thoroughfare close to the junction of Market Street. The large building in the distance was the General Post Office, a structure described by Nikolaus Pevsner as "a tremendous palazzaccio, like a Ministry building in Rome." Designed by the architect James Williams, the post office was constructed between 1881 and 1887 although part of the building was opened in 1884. This magnificent structure was pulled down in the 1960s. At the time of this photograph the Rainbow Hotel was operated by the Manchester Brewery Co. Ltd., a company based at the Britannia Brewery in Broadie Street at Ardwick. Their MB logo can be seen on the frontage of the building. The thoroughfare was named after the springs which provided a supply of water via a pipe network to the market place. 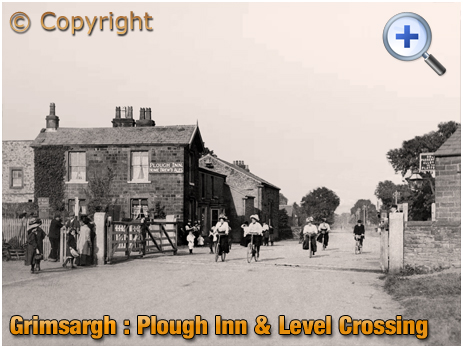 The women in this photograph are seemingly making a dash to get across the level crossing at Grimsargh, though there is nobody waiting to heave the gate across the road. The cyclists have whizzed along Long Sight Lane and have passed the Plough Inn which can be seen here on the left. Despite an agricultural inn sign, the Plough Inn enjoyed a little extra trade from the railway. Indeed, in the early years of the single-track Preston and Longridge Railway, the pub acted as the booking office. A dedicated railway station was built in 1870 when the line was run jointly by the Lancashire and Yorkshire Railway and the London and North Western Railway. A sign on the stone-built Plough Inn is advertising 'home-brewed ales.' In 1900 the publican Ivor Davies advertised the Plough Inn as a cyclist's resort in the Preston Herald, along with promoting the 'prettiest situated bowling green in the district.' Ivor Davies had previously been a tenor in August Van Biene & Horace Lingard's Opera Company. Formerly of the Cemetery Road Hotel, it was Tom Brown who produced the home-brewed ales around the time of this photograph.