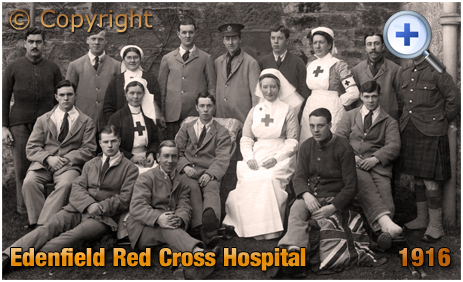 Patients and Nurses at Edenfield Red Cross Hospital pose for the camera in this 1916 photograph. Located at Springfield, this facility was one of eight official auxiliary hospitals in Fife. In the early months of the First World War, the British Red Cross and the Order of St. John of Jerusalem combined to form the Joint War Committee in order to secure such facilities and nursing staff for wounded military personnel. The auxiliary hospitals accommodated the less seriously wounded and helped them to recover from physical and mental injuries. Appeals for funds and equipment in Fife were led by Lady Gertrude Cochrane of Crawford Priory at Springfield. Dorothy Agnes Cochrane, a daughter of Thomas Cochrane, 1st Baron Cochrane of Cults, was one of the most energetic members of the staff of Edenfield Red Cross Hospital. She later married Sir Thomas Fowell Buxton. The Commandant of Edenfield Red Cross Hospital around the time of this photograph was Edith Blanche Nairn, third daughter of the late Sir Michael B. Nairn. In June 1916, wearing her nursing uniform, she married James Harry Sinclair Holroyd, of Sibali, Rhodesia, fifth son of George Barron Holroyd, of Byfleet.