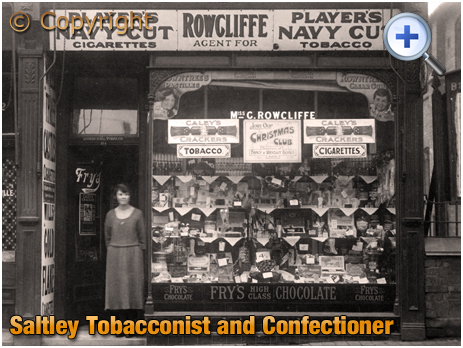 This shop selling tobacco and confectionery was located at No.134 Alum Rock Road at Saltley in Birmingham. The building was located on the northern side of the road next to the Wesleyan Methodist Church. The latter has survived but this retail building was demolished. In this photograph the shop was run by Miss C. Rowcliffe - that is probably her stood proudly on the doorstep. The shop window boasts a large selection of goods on sale and is presented to perfection. She was clearly a fastidious retailer. In 1932 a similar business was operated here and run by William Alfred Billington. However, in 1921 a trade directory for Birmingham shows that the shop was occupied by the furniture dealer Arthur Bruce. By the Second World War the shop had become a branch of Keys Ltd. Dealers in wireless radios, this firm was based in John Bright Street in the city centre but had branches around Birmingham and the Black Country. 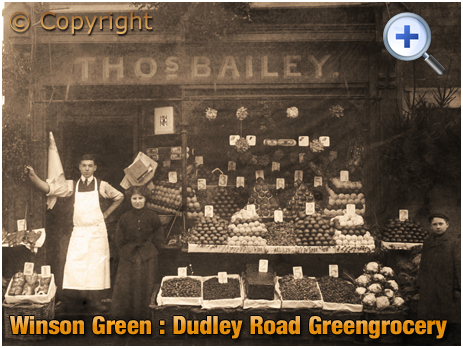 Operated by Thomas and Winifred Bailey, this greengrocer's shop was located on the north side of Dudley Road at Winson Green, a few doors from the Yorkshire Grey public-house. Thomas Bailey was born in Swindon, Wiltshire around 1871. His wife originated from Ross in Herefordshire. The couple had two sons Thomas and Christopher but only one boy can be seen in the photograph stood in front of the vegetables. The boy looks around six or seven years-old which dates the photograph to around 1905. In 1915 the shop was straddled by the milliner Harry Hall and the tobacconist's shop owned by Frederick Collins. 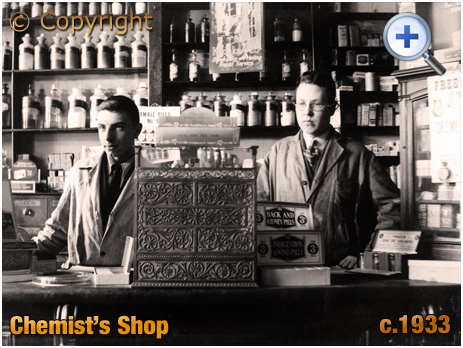 This photograph affords a look inside a chemist's shop during the early 1930s. Two young men are stood behind the counter - both look a little young to be fully-qualified chemists. Perhaps they were shop assistants. The shelves were lined with jars of concoctions. However, some of the products were bought in for retail. For 3d. the boxes next to the cash register offered Back and Kidney Pills, along with Indigestion and Wind Pills. Behind the staff there were Female Pills No.1 whatever that means? 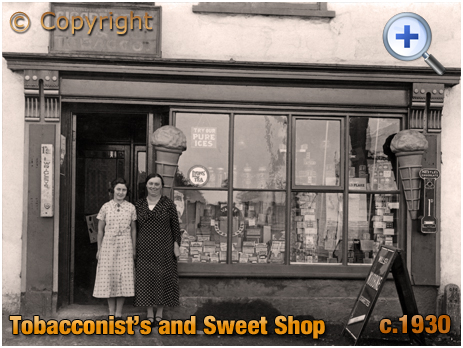 A charming photograph of a tobacconist's shop that also sold sweets and ice creams. The location is unknown but it would appear that it was a mother-and-daughter operation. The pair are stood on the doorstep of the shop that also sold some grocery items such as Lyon's Tea. Shop window displays were regarded as an important showcase and the women have carefully displayed many of the products on sale. Two large ice cream cones adorn the frontage and a sign stating "try our pure ices" was tempting patrons on a hot sunny day. If the shop was closed people could purchase chewing gum or a chocolate bar from the machines mounted on the wooden pilasters.