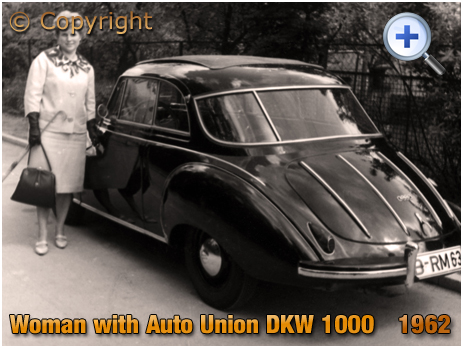 Taken in 1962, this photograph shows a woman posing with an Auto Union DKW 1000 at Berlin. The DKW letters stood for Dampf - Kraft - Wagen or Steam-powered vehicle as the first design of the founder, Jörgen Skafte Rasmussen, was indeed a steam car. DKW formed part of Auto Union, an amalgamation of four car producers in 1932 and predecessor of what is known as Audi in the 21st century. Respresenting the Audi, Horch, DKW and Wanderer brands, the four interlocking rings used as a logo can be seen on the boot of this vehicle, the registration number of which was B-RM 63. Earlier models bore the DKW badge but this car featured the four-ring Auto Union badge across the boot and air grill at the front. Produced between 1958 and 1965 and featuring front-wheel drive, this car was viewed as a slightly upmarket vehicle. This model appears to be the 1000 Coupé version. A pillarless coupé was also produced by the company. 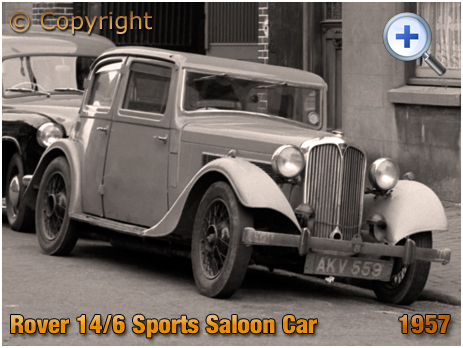 This Rover 14/6 Sports Saloon was parked close to Kunzle's Bakery in Birmingham in July 1957 so perhaps it was owned by one of the managers. Johnfromstaffs on the Birmingham History Forum states that the AKV number plate originated in Coventry, and dates the vehicle between July to October 1935. The car was therefore more than twenty years old when this photograph was taken. 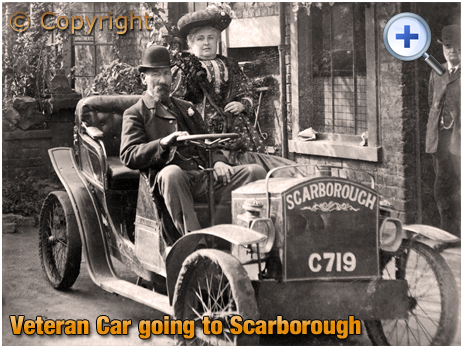 This car looks to be heading to Scarborough on an early rally and is being photographed on departure. However a sound theory by Johnfromstaffs is that the car is a seaside photographer's "prop" for the purpose of selling his services. He adds that there are apparently no brakes in any of the wheels, and the tyres do not look roadworthy. The plate C719 is a pre-WW1 number for West Riding of Yorkshire, commencing in January 1904, and completing in April 1915.
Thanks to Johnfromstaffs for identifying thise vehicle. 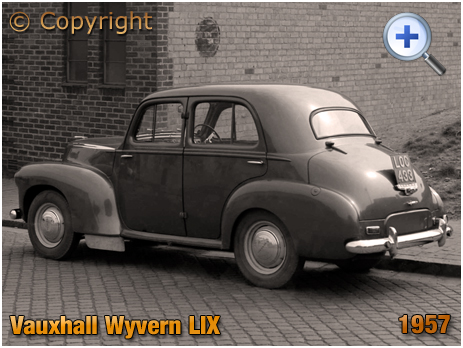 This Vauxhall LIX was parked in Summer Lane at Birmingham in March 1957 when the photographer captured this image. Influenced by American design, this saloon was one of the first post-war designs to be produced by Vauxhall. Production commenced in September 1948 and continued for almost three years, though most were sold in the export market. The vehicle was powered by a 1442 cc four-cylinder engine and boasted a top speed of 62mph. In the UK the Wyvern was remodelled and continued in production until succeeded by the Vauxhall Victor.
Thanks to Johnfromstaffs for identifying thise vehicle. 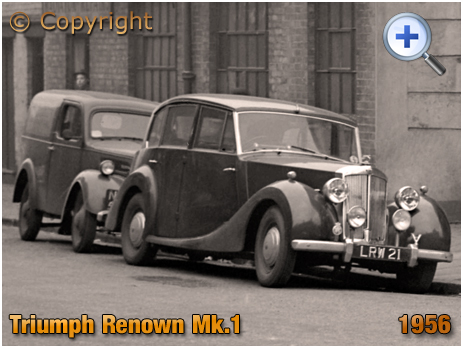 Parked in front of a Fordson 5cwt van in Brearley Street at Birmingham during November 1956, this photograph shows a Triumph Renown Mk1 saloon that was registered at Coventry in September 1951. This vehicle was renamed the Renown in October 1949 and deployed a new chassis based on the Standard Vanguard. The Standard Motor Company had acquired the Triumph Motor Company following the Second World War.
Thanks to Johnfromstaffs for identifying this saloon car. 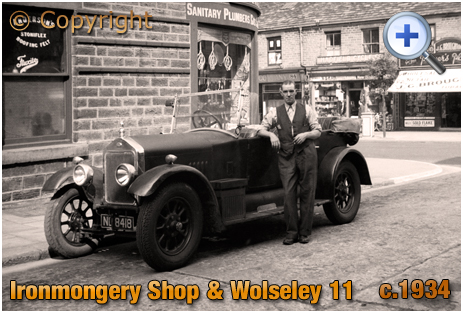 An inter-war photograph of an ironmonger's shop at No.85 High Street West, on the corner of Chapel Street in Glossop. The shop, which had traded here from Edwardian times, was established by Walter Oliver and continued by his sons. Walter and Elizabeth had three sons : Frank, Leonard and Edward. This is probably one of the sons standing with a Wolseley 11 automobile around 1934. This automobile was produced between 1924-8.

Walter Oliver, a plumber and ironmonger, had previously lived with his family in North Road. He initially traded from the corner unit but the shop was later extended into No.87 next door. The business traded here until the early 1990s. After being sold, the properties were divided again with a charity shop opening on the corner with Taj Balti and takeaway next door. The corner shop later became part of an estate agency. In the late 19th century the corner property was used by the chemist and dentist Henry Kinder. Mainly working with false teeth, he had learned dentistry with Mr. Morrey of Stalybridge. When he was trading on the corner of Church Street a Wesleyan Chapel and School was on the opposite corner.

This photograph also provides an excellent view of the shops on the opposite side of High Street West. With a blind drawn across the pavement, the shop on the right was operated by the former engraver James Gilbert Broughton and his wife Ada as wholesale and retail tobacconists. The shop had previously been run the tobacconist John Cuthbert. He was succeeded by his wife Mary before the shop was taken over by the Broughton's. In more recent times the shop has been known as Pizza Plus.

The centre shop across the road was a bike shop trading as Hadfield Cycle Co. In the 19th century, this retail unit was a chip shop, a business for which the potatoes were grown by the Armitage family who operated the shop. In the 1890s the chippy continued under the ownership of Job Pickford. By the end of the Edwardian period the chip shop was being run by Eliza Bramhall, along with niece Alice. However, she soon sold to Joseph Leach. The premises were converted into a cycle shop during the 1920s. In more recent times the shop was home to Ursula's Ladies and Gents Hair Salon.

At the time of this mid-30s photograph the shop on the left was part of the Gas Company, the works and gasometers being situated on land to the rear of the main street frontages. In the late Victorian era it was however a retail confectioner's store run by Herbert and Caroline Bunn. In the Edwardian period the sweet shop was kept by Harriet Douglas. The shop was later used as a gas showroom, a role it served for many years. In recent years the premises has been a branch of Cheetham Jackson Financial Planning. 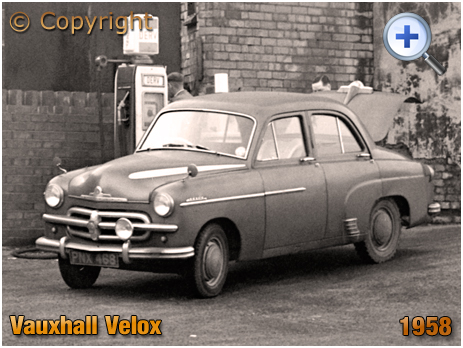 This Vauxhall Velox [PNX 468] is parked by a diesel pump and a bloke is reaching into the boot for his sawn-off shotgun before asking for the contents of the till. In reality he is probably having a jerry can filled with derv. Fitted with a larger engine, the Vauxhall Velox was a more powerful saloon car than the Wyvern. Production of this design continued until the PA model was introduced in 1957.
Thanks to Johnfromstaffs for identifying thise vehicle. 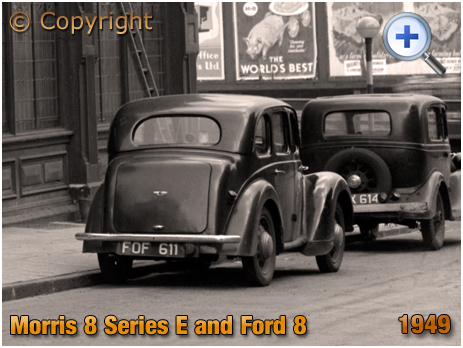 The cars are parked in Summer Lane at Birmingham not long after the Second World War. FOF 611 is a Morris 8 Series E, a car that went into production in 1939 but continued to be made for during the war for the military and other essential civilian use. In front of the Morris is a Ford 8 or Model Y, a car that caused a stir because it was so cheap to buy. 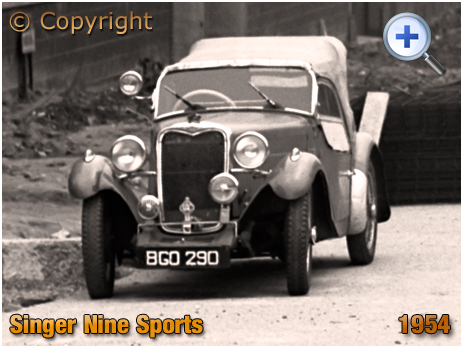 This Singer Nine Sports was parked amid large-scale roadworks in Digbeth at Birmingham during 1954 and was probably owned by one of the contractors involved in the redevelopment of this arterial route. Originating from London and registered in 1934 the car looks in superb condition considering it was 20 years-old when this image was taken. The competitively-priced Singer Nine Sports went into production during 1932 and later in the decade evolved into the Bantam model.
Thanks to Johnfromstaffs for identifying this sports car. 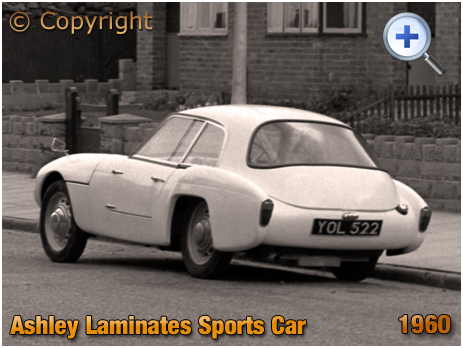 This Ashley Laminates Sport Car was parked in Templefield Street near Birmingham City's football ground when photographed in July 1960. The number plate [YOL 522] shows that the fibreglass-bodied vehicle was registered at Birmingham in June 1959. Ashley Laminates was founded by Keith Waddington and Peter Pellandine in 1955. This model was based on an old Ford 7Y chassis, the engine probably being from an E494A Prefect.
Thanks to Johnfromstaffs for identifying this sports car. 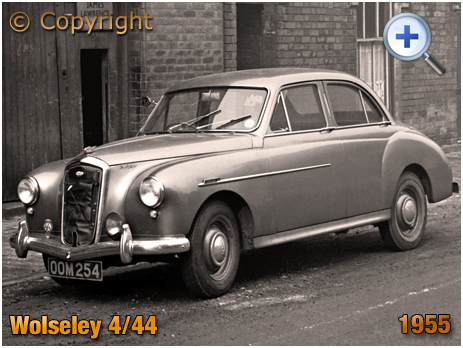 This Wolseley 4/44 [OOM 254] was photographed outside the premises of James Lawrence at Birmingham in 1955. This model was introduced by the British Motor Corporation in 1952 and produced for three years before being succeeded by the Wolseley 15/50. The vehicle was quite similar to the MG Magnette ZA but the latter was more desirable as it was somewhat faster. However, the 4/44 was equipped with some luxurious trim and seating.
Thanks to Johnfromstaffs for identifying this saloon car. 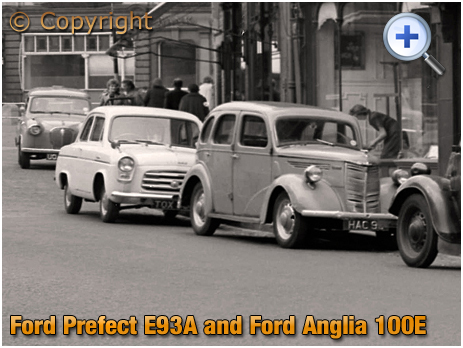 This photograph was taken in Islington Row near the Five Ways towards the end of the 1950s. In the foreground is a Ford Prefect E93A which was registered in Warwickshire during 1948. Manufactured at the Ford factory in Dagenham and produced specifically for the UK marketplace, the vehicle went into production in October 1938. Behind this vehicle is a Ford Anglia 100E which came to the market in 1953. This particular car was registered in Birmingham three years later.
Thanks to Johnfromstaffs for identifying these vehicles. 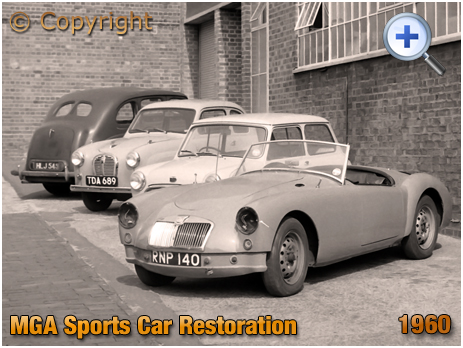 This photograph was taken in Hampton Street at Birmingham during 1960 and seems to show a restoration project of a MG Sports car. Perhaps the vehicle had been involved in an accident as it was only a few years old when captured on film here. Officially launched at the Frankfurt Motor Show, the MGA was produced from 1955 to 1962. Although more than 100,000 rolled off the production line, only a few were sold in the UK as the majority were exported. Parked next to the MG are three different Austin models, the Mini, A35 Saloon and an Austin 12 or 16 saloon, both of which had the body but offered a choice of engines.
Thanks to Johnfromstaffs for identifying these vehicles.