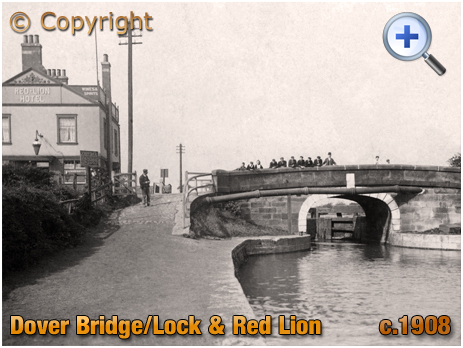 This Edwardian photograph was possibly taken on a Sunday morning as a group of men are gathered on the canal bridge and may have been waiting for the licensee of the Red Lion Hotel to open up. In the 21st century this canalside tavern was trading as the Dover Lock Inn. Dover Lock No.2 can be seen through the arch of the original bridge. Lock No.1 and the Lock House was a little further along the Leigh Branch of the Leeds and Liverpool Canal. A new canal channel was later constructed to compensate for mining subsidence and the locks became redundant. The bridge has also been altered over the years. Joseph Shaw was the licensee of the Red Lion Hotel when this photograph was taken. He kept the hostelry with his wife Mary Ann. 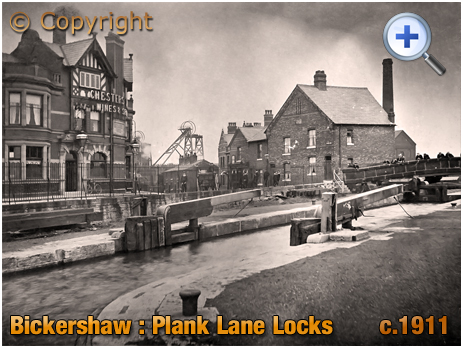 This photograph shows the canal locks at Plank Lane, along with the colliery and adjoining Britannia Hotel. Replacing an older building this attractive hotel was erected in 1903 by George Shaw & Co. Ltd., of the Leigh Brewery. Some of the company's etched-glass windows survived into the 21st century. However, this 1911 photograph shows that the hotel was selling beers from the Ardwick Brewery operated by Chester's Brewery Co. Ltd. Although the Britannia Hotel closed in 1962 the building was not demolished until April 2009. Bickershaw Colliery opened in the early 1830s and transported coal via trams to the Leeds and Liverpool Canal for onward distribution. A number of accidents occurred at the colliery, the worst disaster being the death of 19 people when a mine-shaft elevator fell in October 1932. Deemed unprofitable by British Coal, the colliery closed in March 1992.