Photographs, Negatives, Slides and Plates of Ships and Shipping 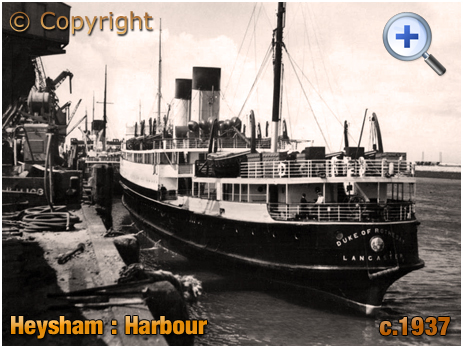 An inter-war view of Heysham Harbour with R.M.S. Duke of Rothesay passenger ship berthed. Built at the Dumbarton shipyard of William Denny and Brothers, this steamer was operated by the London Midland and Scottish Railway from 1928 to 1956, principally on the Heysham to Belfast route. The Midland Railway company built the new harbour and railway link in the late 19th and early 20th centuries, officially opening in 1904. In March 1929 the Northern Whig reported that "After a quarter of a century's service as commander in the Heysham-Belfast steamship service, Captain Relph, Commodore master of the R.M.S. Duke of Rothesay, and for many years captain of the S.S. Antrim, has retired, . He had the fine record of never once during the 25 years he was master on the Heysham route missing a trip or had a day off duty through illness." Three years later, in September 1931, Captain John M. Campbell died suddenly when on the bridge of the R.M.S. Duke of Rothesay, during the crossing from Heysham to Belfast. The ship's officers and crew all attended the funeral. H. C. Samson was the chief engineer on the R.M.S. Duke of Rothesay when the vessel served as a hospital ship during the Second World War. He sailed from Southampton to Mulbery Harbour, Cherbourg and the beachheads. The ship carried a total of 24,000 hospital patients during this period, and at Coursells on D plus-two day came under heavy fire. One shell penetrated the deck and fell without exploding, into the captain's bunk.