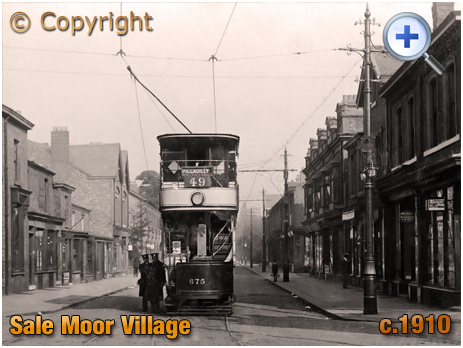 Many of the buildings in this photograph survived into the 21st century, particularly the parade of shops on the right looking along Northenden Road. The shop in the foreground is on the corner of Hampson Street and was a pharmacy - a business that has remained here for generations. In recent times it was owned by John Hugall Ltd. The shops, along with Hampson Street, was a late 19th century development. The driver and conductor of the tram are posing for the photographer. It was the 49 service to Picadilly in Manchester. Ellen Lamb, a resident of Hampson Street, was sentenced to seven days' imprisonment for using bad language in her own house during the summer of 1908. However, she steadfastly informed the magistrates were exceeding their powers and the sentence was revised to a fine. 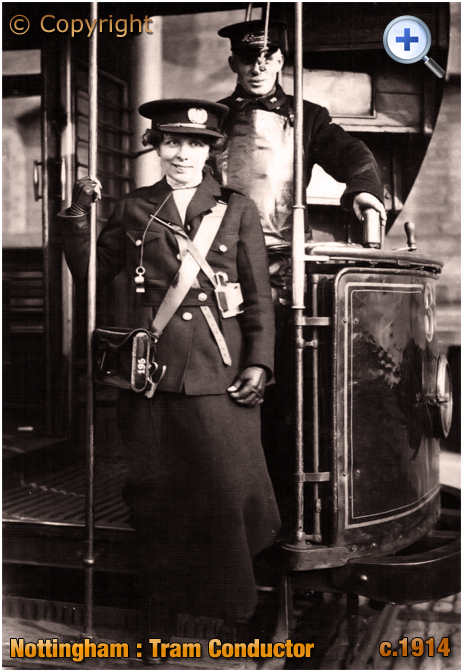 Taken in Nottingham around 1914-5, this shows a tram conductor, possibly new to the job. Transport was a sector of the job market where new opportunities opened up for women when the men headed off to war. Women began working as bus conductors, ticket collectors, porters and, in some areas, they were even allowed to drive the bus! During World War One the number of women working on the railways rose from 9,000 to 50,000. I hope that this woman did not suffer any harassment whilst working on the trams. The fact that programmes like "On The Buses" are still being shown on television demonstrates that the journey is a long way off the correct destination. 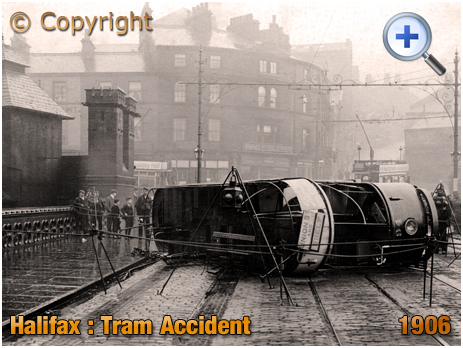 Halifax had a poor record of tram accidents during the Edwardian period. This particular accident occurred on a Sunday evening in July 1906 when a tram driven by Theodore Chadwick went out of control when travelling down New Bank towards North Bridge from Shelf. The tram overturned immediately after it crossed the points at the bottom of Haley Hill. Police Constable James Dixon was on duty at the bottom of New Bank and heard the tram screeching down the hill at a very fast rate. Accordingly, he warned pedestrians to clear the area. The tram can be seen next to the pier of North Bridge, an iron and stone structure opened in 1871. Two passengers on the tram died as a result of the crash and four people were seriously injured. At the subsequent inquest a verdict of "Accidental Death" was returned by the jury. 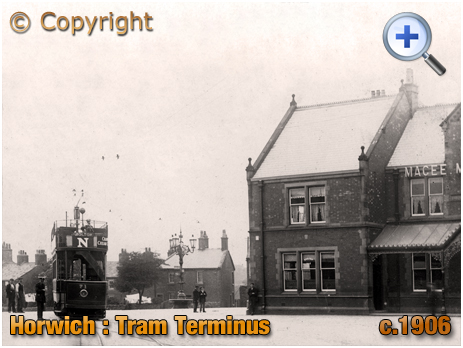 A fine view of the tram terminus at Horwich outside the Crown Hotel, a landmark public-house of the area. This version of the hostelry has survived into the new millennium. A plaque on the building states that the Crown Hotel "was originally a stagecoach inn with a toll bar on the turnpike road. Rebuilt in 1886 following the opening of the loco works." The Bolton Corporation Tramways route for this tram service was opened in 1900 and lasted until 1946. It was known as the N route and a large letter N can be seen on the front of the tram. This particular tram was No.71 and built at the United Electric Car Company in Preston. At one time there were four taverns on this road junction - in addition to the Crown Hotel there was the King's Arms. Queen's Head and the Toll Bar. The latter survived but in more recent times the name was changed to Beeley's.