History and Information on Kinver in the County of Staffordshire.

Some history of Kinver

More information on Kinver to follow. I probably created the page as I had a link to Kinver from another page. When building the site it is easier to place links as they crop up rather than go back later on. I realise this is frustrating if you were specifically looking for information on Kinver. There is information on Staffordshire dotted around the website - click here for a suitable starting place. 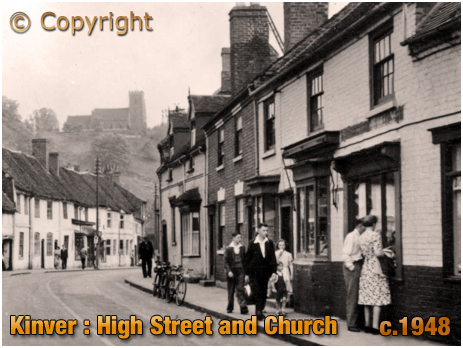 If you have a genealogy story or query regarding Kinver you can contact me and I will post it here in addition to including your message within the website pages for Staffordshire Genealogy.

If you would like to share any further information on Kinver - perhaps you drank in one of the pubs in the past? Or maybe knew a previous publican running one of the boozers? Whatever the reason it would be great to hear of your stories or gossip. Simply send a message and I will post it here.

"A startling accident occurred late on Monday night in the Staffordshire and Worcestershire Canal at Kinver. James Merrick, and his sister, a single woman, were on their way homewards along the canal side, when in the darkness of the night, Merrick missed his footing and fell into the water. His sister, it is believed, for the facts are not exactly known, jumped in after him to try and help him. However this was, it led to the loss of her own life. Merrick was able to get out, and some boatmen on a bridge near, hearing the splash, ran to the spot, and succeeded in getting the sister out. She was alive but in a serious state. Dr. Holyoake was called and did all he could for her, but she died within a couple of hours."
"Canal Accident"
Worcestershire Chronicle : April 11th 1891 Page 5

"Last Monday a man named Edwin Siddons made a very determined attempt on his life, at Kinver, first by attempting to drown himself, and then by an attempt to cut his throat. He came into Kinver on Saturday last, and was noticed to be wandering about. Lodgings were found for him by the police, but in the night he greatly alarmed the inmates of the house by walking about the rooms. His strange conduct culminated on Monday by his jumping over the bridge across the Stour. The water at this particular place is not sufficiently deep enough to drown a man. Siddons lay down in the water in a most determined fashion. A man named Male saw what Siddons was doing, and raised an alarm, where upon Mr. Roberts, a local publican, went to Siddon's rescue. He got over the bridge and was endeavouring to get down to the water when he fell and broke his right leg above the ankle. Two other men came upon the scene, and Siddons taking in the situation, drew his knife, and made an attempt to cut his throat, but was unable to accomplish his purpose. He was taken to Brierley Hill police station, and there detained all night. On Tuesday morning he was brought before Mr. J. S. Williams, magistrate, and was examined by Mr. H. D'Arcy Ellis. the police surgeon. Siddons had been subject to hallucinations of late, and had the notion that somebody was following him, and that something was going to happen to him. An order was now made for his removal to Stafford Asylum. Mr. Roberts, who broke his leg in attempting to rescue Siddons, was taken to the Kidderminster Infirmary, and was detained there, his injuries being of a very serious nature."
"Determined Suicide Attempt"
County Advertiser & Herald for Staffordshire : July 8th 1893 Page 3