History and Information on Lichfield in the County of Staffordshire.

Some history of Lichfield 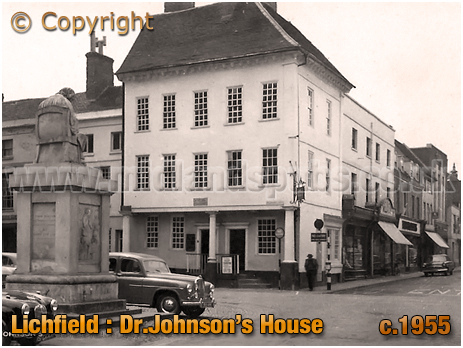 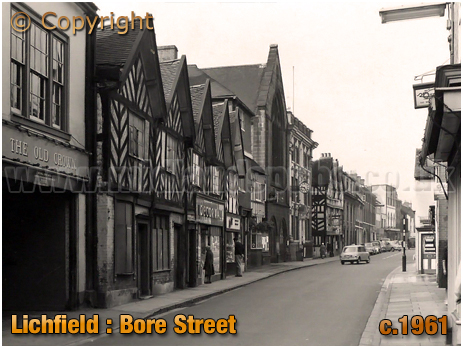 If you have a genealogy story or query regarding Lichfield you can contact me and I will post it here in addition to including your message within the website pages for Staffordshire Genealogy.

If you would like to share any further information on Lichfield - perhaps you drank in one of the pubs in the past? Or maybe knew a previous publican running one of the boozers? Whatever the reason it would be great to hear of your stories or gossip. Simply send a message and I'll post it here.

"Private F. A. Parsons, "C" Company, Shropshire Light Infantry, was summoned at the instance of the landlord of the Turk's Head Inn, Sandford Street, for doing wilful damage to the complainant's property by breaking a pane of glass, on March 25th. The damage was estimated at 9s. William Lewis Cope, the landlord, stated that on the evening of Good Friday the defendant, with three comrades, was served at his house. The party commenced singing and dancing, and his wife told them she would not allow that. Witness went into the taproom, and the youths left the house, the defendant slamming the door behind him, which caused the pane of glass to break. He was quite sure the defendant used more violence than was necessary, and seemed to be annoyed. Thirza Cope, wife of the licensee, said she served the party. When they were singing and dancing she told them she did not allow them to make a noise, as it was like a Sunday, and people were going to church. Ultimately she told them they would have to go. The door, which defendant slammed, was always standing open, and he went out in a temper. P.C. Maddox deposed to seeing defendant outside the house when he admitted banging the door. The defence of the defendant was that he did not shut the door, though "his foot might have caught it." Parsons was given a good character from his regiment, and a fine of 6d. was imposed, the costs being 12s. 6d., and the damage 9s."
"A Soldier's Temper"
Lichfield Mercury : April 15th 1910 Page 4

"Ernest Simms and Alfred Simms, mineral water manufacturers, Church Street, were summoned by Inspector Jones of the R.S.P.C.A. for unlawfully illtreating a gelding, whilst working it in an unfit state. Defendants pleaded not guilty. Inspector Jones said that on March 4th, about 11.30 a.m., he saw Ernest Simms driving a black gelding pony, which was attached to a vehicle loaded with mineral water cases. The pony was very lame on both fore feet. On examination he found the animal in fair condition, but the disease from which it was suffering was uncurable. P.C. Smith corroborated the Inspector's evidence. Albert Simms explained that the horse was taken out because it had not been worked for some time. He did not know the horse had the disease of which the Inspector had spoken, or else it would not have been taken out. On promising to have the animal destroyed if it was found to be unfit to do any more work, or, if otherwise, worked but lightly, each defendant was only ordered to pay 7s. costs, the Mayor remarking that he did not believe there was any intentional cruelty."
"Unintentional Cruelty"
Lichfield Mercury : April 15th 1910 Page 4

"John Scott, circus proprietor, of 12, Charles Street, Hotwells, Bristol, was summoned for ill-treating two ponies on March 2nd. P.S. Smith said that on the evening of March 2nd he saw the defendant driving two small ponies, which were attached to a dray. The driver was beating the animals with the butt-end of a whip, and he could hear the thud blows on the ponies' backs 150 yards away. There was a continual showering of blows. When spoken to Scott said the ponies would not go. On examining one pony he found weals on its side. William Scott, who appeared for his brother, said he owned 33 horses, and he had never seen him ill-treat any of them. The Mayor described it as a very bad case, and a fine of £5 and 15s. costs was imposed."
"Circus Proprietor Fined"
Lichfield Mercury : April 15th 1910 Page 4

"Thomas Quinn, aged 23, Sandford Street, Lichfield, was summoned for assaulting William Walker, a painter, Burntwood, on March 2nd. The evidence of the complainant was that while he and some friends were standing with their bicycles in Market Street, defendant, without having received any provocation, hit him under the chin, and knocked his bicycle down. Defendant had previously challenged him to "come up a yard." A fine of 1s. and costs, 18s. 6d., was imposed."
"A Pugilistic Youth"
Lichfield Mercury : April 15th 1910 Page 4

"Christopher Lees and Samuel Murrell, privates in the Royal Warwickshire Regiment, were each ordered, pay 9s. 6d. costs for riding their bicycles without lights in Lichfield on the evening of April 1st. P.S. Truswell and D.C. Eley proved the case."
"Riding Without Lights"
Lichfield Mercury : April 15th 1910 Page 4