History and Information on Norton Canes in the County of Staffordshire.

Some history of Norton Canes 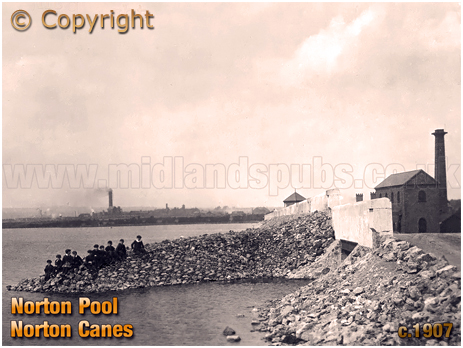 If you have a genealogy story or query regarding Norton Canes you can contact me and I will post it here in addition to including your message within the website pages for Staffordshire Genealogy.

If you would like to share any further information on Norton Canes - perhaps you drank in one of the pubs in the past? Or maybe knew a previous publican running one of the boozers? Whatever the reason it would be great to hear of your stories or gossip. Simply send a message and I will post it here.

"Remarkable evidence was disclosed at an inquest held at Norton Canes, yesterday, by the district coroner, [Mr. Gerald C. Lewis], concerning the death of a widow, named Elizabeth Mosedale [54], of Broom's Building, whose body was recovered from the canal. Frederick Mosedale, son, gave evidence showing that his mother left his house on Monday morning to return to his brother's house where she had been living. Continuing, witness admitted that his mother took a "little drop" sometimes, but it did not take much to get over her. Ellen Mosedale, wife of John Mosedale, said her mother-in-law returned home to their house about seven o'clock on Monday morning, but she only stayed a few minutes before going out again. ln reply to the Coroner, witness admitted that, her mother-in-law sometimes stayed out all night. Witness further admitted that her mother-in-law had been drinking on the Sunday. Patience Mosedale, a daughter-in-law, said there were some words on Sunday afternoon between the two brothers, and she went into the house and found Mrs. Mosedale crying. The deceased then remarked, "I shall not be a trouble to anybody much longer; I am going to jump in the canal." She was quite sober at the time, and witness did not think she meant what she said. A miner named Henry Rogers, of Norton Canes, said on Monday night when he was going out of the Malt Shovel he saw the deceased sitting on the common. The Coroner questioned witness in regard to the nature of his company with the woman, and witness admitted misconduct, stating that another man named Walter Shaw was also guilty of it. When he [witness] left the deceased that night she was then about 20 or 30 yards away from the canal. Walter Shaw, on being called, said that he and Rogers followed the woman and tried to persuade her to go home, and as she would not they left her on the common at the far side of the canal bridge. The Coroner: Did anything take place between you? Witness: No, sir. The witness, in further reply to the Coroner, made a persistent denial, but Rogers, on being called into the room, the witness admitted giving the woman money, and later the Coroner's question as to his misconduct being repeated, replied, "Well, I will say yes." Charles Ironmonger, a farmer, of Norton Canes, spoke of seeing the last two witnesses in the woman's company on Monday night. A boatman named John Betts deposed to finding the body of the woman in the canal about 3.30am Tuesday morning. Dr. Eden, who examined the body, said there were no marks of violence, and death in his opinion was due to drowning. The Coroner, summing up, said that no doubt the men had been guilty of gross misconduct, but on the doctor's evidence they would have to discount all knowledge of what had taken place, as there were no signs of injury or violence to the woman's body. Rumours had gained currency regarding the way these men had treated the woman, and it was his duty to make the affair public. The jury returned a verdict of "Accidental drowning," and asked the Coroner to severely reprimand the men. The Coroner said the conduct of the two men had been disgusting and disgraceful. He disallowed their expenses."
"Strange Case at Norton Canes"
Lichfield Mercury : June 18th 1909 Page 5